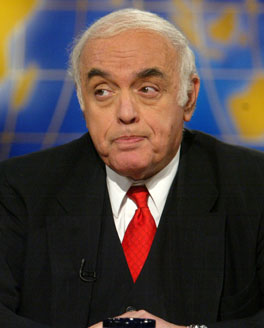 Syndicated columnist Bob Novak publicly revealed Valerie Plame-Wilson's identity as a covert CIA agent in 2003, setting in motion an investigation that brought down I. Lewis "Scooter" Libby, chief of staff to Vice President Dick Cheney, and seriously damaged the reputation of Deputy Secretary of State Richard Armitage and White House political maestro Karl Rove for leaking her name to other journalists.

The Wilsons left Washington two years ago to live in Santa Fe, N.M., where, as Wonkette put it, "terrorists and Bob Novak will never find them." Now, from the desert, they are weighing in on Novak's latest brush with the law in the nation's capital -- an incident that happened Wednesday in which the 77-year-old syndicated columnist, driving a black Corvette, hit a pedestrian and kept on driving.

In a statement to ThinkProgress, the Wilsons equated Novak's disregard for pedestrians with a similar disdain for covert CIA officers.

Our sympathies go out to the victim of Novak’s action. Once again Novak has demonstrated his callous disregard for the rights of others, as well as his chronic inability to accept responsibility for his actions. We have long argued that responsible adults should take Novak’s typewriter away. The time has arrived for them to also take away the keys to his Corvette.

Meanwhile, details are emerging on other aspects of the case.

The victim, 66-year-old Don Likinquist, may be in worse shape than earlier reported. Or not. WJLA-TV is quoting an unnamed source who said the man has casts on his neck and back and is awaiting a surgical team evaluation.

The lawyer who stopped Novak half a block away -- and who does not believe the columnist's claim that he had no idea he'd hit anyone -- turns out to be an Obama Democrat. David Bono, a partner at Harkins Cunningham, contributed $2,000 to the Obama campaign in May during the frenzied primary run against Hillary Rodham Clinton, according to the Center for Responsive Politics.

As for Novak, he's not talking, but he told WJLA-TV yesterday that he feels "terrible," adding of the victim, "He's not dead, that's the main thing." ...

... The cyclist who flagged Novak down about a block away from the incident claims that the man who was struck rolled off of Novak's windshield, calling into question the conservative commentator's claim that he didn't even know he had hit someone.

Beyond the possibility that Novak may have tried to flee the scene of a more serious accident than originally reported, we're a little miffed that he was only given a $50 ticket for failing to yield to a pedestrian in a walkway. That's the District's standard, but it starts seeming awfully low when you consider that many parking D.C. tickets start at $30 and that Arlington County charges up to 10 times the amount for the same offense. The D.C. Council has been debating raising the fines since late last year, but not much movement has been seen on that front.

So what will come of the Prince of Darkness and his pedestrian problem? Since Novak writes about pretty much anything -- including things that are classified -- maybe he can write a column about what happened.