Protesters Aim to Shame DLA Piper Over Ties to Dictator/Accused 9/11 Inside Trader “Buzzy” Krongard and the Piper Board, Blackwater 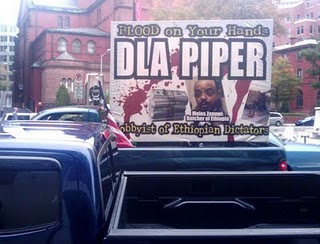 WASHINGTON – A pickup truck driving around Washington today displayed a large billboard in its bed accusing DLA Piper of lobbying for an Ethiopian dictator.

The American Lawyer reported last year on the firm’s 2008 efforts on behalf of Ethiopian Prime Minister Meles Zenawi and his government to keep Congress from imposing sanctions on the country for human rights violations. In April, the firm released a statement to Above the Law saying that it was no longer representing Zenawi’s government in those matters, but is still helping them with pro bono work relating to a school in Addis Ababa.

Apparently, there are still hard feelings – though we’re not sure who has them.

Outside Notables Series Presents … A.B.”Buzzy” Krongard, US Director of DLA Piper’s Global Board of Directors

“A View of Intelligence”

A.B. “Buzzy” Krongard is an outside U.S. director to our Global Board of Directors which has been organized to oversee and coordinate the worldwide operations of the firm. Mr. Krongard is the former Executive Director of the Central Intelligence Agency. The Executive Director is the third ranking position within the CIA and functions essentially as the Chief Operating Officer of the Agency.

Mr. Krongard was the former Chairman and Chief Executive Officer of investment banking firm Alex. Brown, Incorporated. He currently is the Non-Executive Chairman of the Board of Directors of PHH Corporation, a leading outsource provider of mortgage and vehicle fleet management services.

“The handshake is vicelike, the stare hard. He owns a Walther PPK pistol–the 1960s James Bond’s handgun of choice–and practices martial arts. He smokes pre-Castro Cuban cigars and once, while scuba diving with some macho buddies, he says he punched a great white shark in the jaw, just to show that he could. A. B. (Buzzy) Krongard, the former executive director of the Central Intelligence Agency, is by all appearances a throwback to an earlier age, when spymasters were often Ivy Leaguers with a sense of élan and a streak of boldness–sometimes too much of it.”

The Kronkgards and BLACKWATER (XE)

State Dept. IG Recuses Himself from Probes Over Blackwater Ties

The State Department’s top oversight official has recused himself from all matters relating the private military firm Blackwater after admitting his brother served on the company’s advisory board. Inspector General Howard Krongard announced the move Wednesday just hours after initially denying that his brother, Alvin ‘Buzzy’ Krongard, is a Blackwater board member. The State Department has already come under criticism for its lax oversight of Blackwater since the September 16th killing of seventeen Iraqi civilians by Blackwater guards. Howard Krongard has previously been accused of thwarting probes of contracting fraud in Iraq and Afghanistan to avoid embarrassing the White House. Krongard is said to have refused to send investigators to Iraq and Afghanistan to probe three billion dollars in contracts.