Profiting from the Holocaust – The Loot from Aktion Reinhard 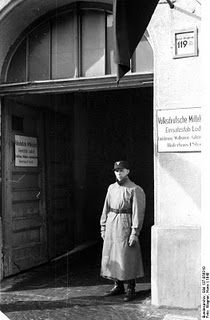 SS-Brigadefuhrer August Frank, one of the heads of the Economic and Administrative Main Office (WVHA) issued an order on the 26 September 1942 to the Aktion Reinhard headquarters in Lublin and to the commandant in Auschwitz, regarding the correct procedure for the treatment and distribution of Jewish possessions and valuables within the extermination camps.

Within the three death camps, Belzec, Sobibor and Treblinka the Germans established working commandos to sort and pack the possessions of the murdered Jews to the Reich, in accordance with August Frank’s orders.

Heinrich Unverhau who supervised the storage depot in the locomotive sheds at Belzec testified at his trial:

“SS Sturmbannfuhrer Hering accused me of being a saboteur because of the fact that during the sorting of the clothes that were sent for utilisation in Germany, a yellow Jewish star was found. Some money was also found there. These clothes belonged to Jews who were killed in Belzec.”

Subject: Utilization of property on the occasion of settlement and evacuation of Jews.

Without taking into account the over all regulations which are expected to be issued during October, pertaining to the utilization of mobile and immobile property of the evacuated Jews, the following procedure has to be followed with regard to the property carried by them — property, which will in all orders in the future be called goods originating from thefts, receiving of stolen goods, and hoarded goods:

Foreign currency, diamonds, precious stones, pearls, gold teeth and pieces of gold will be transferred to the WVHA for deposit in the Reichsbank.

Men’s clothing and underwear, including shoes will be sorted and checked. Whatever cannot be used by the prisoners in the concentration camps and items of special value will be kept for the troops: the rest will be transferred to VoMi.

Women’s underwear and clothing will be sold to the VoMi, except for pure silk underwear (men or women’s), which will be sent directly to the Economic Ministry.

Bedding, like sheets and pillowcases, as well as towels and tablecloths will be sold to VoMi.

All types of eyeglasses will be forwarded for the use of the Medical Authority. Glasses with gold frames will be transferred without the lenses, along with the precious metals.

All articles mentioned in paragraphs 4, 5,6 or little or no value will be transferred by the SS-WVHA for the use of the Economic Ministry. With regard to articles not specified in the aforementioned paragraphs, the Chief of the SS-WVHA should be consulted as to the use to be made of them.

Oskar Deigelmann a Reichsbahn official recalled a visit to Belzec:

“As a controller I was responsible for ensuring the track was in good condition and in particular that the train ran smoothly. During a visit to the station at Belzec the supervisor, a Secretary or Senior Secretary from Thuringen, informed me that he was having a lot of problems with the SS, who were stationed near the wood.

Some time later I myself saw and had a word with a number of SS people in the waiting –room at Belzec. When I inquired, they told me that they were not members of the SS but they had merely been given these uniforms. As they described it, most of them came from lunatic asylums or nursing homes in the Reich, where they had been involved in the killing of the mentally ill.

I would like to say that one day the full significance of Belzec camp became clear to me when I saw mountains of clothes of all types behind our locomotive shed. There was also a large number of shoes there, as well as jewellery and other valuables.