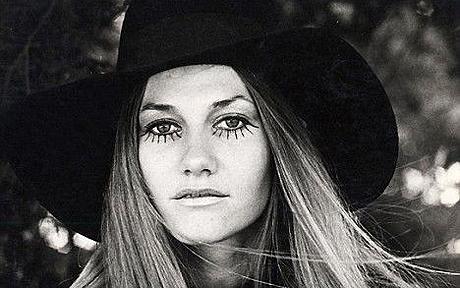 The burned and buried body of the former British model was discovered in Hungary. On April 23, 2009, The Telegraph reported: “Her family had been campaigning for a proper investigation into her death after Hungarian and British authorities initially ruled out foul play. Hungarian-born Mrs Rhodes, 65, came to England as a child and had a successful early career as a model including an appearance in a film by John Lennon and Yoko Ono. She returned to her homeland 12 years ago but disappeared from her animal sanctuary last September, triggering fears from her family that she was in danger. The police initially refused to take their concerns seriously but eventually agreed to investigate and arrested one of her colleagues who was seen with her on the day she vanished. … ” – AC

A FRIEND of John Lennon and Yoko Ono was murdered by a policeman in a row that began over a dog, the victim’s family told an inquest today.

The body of Eva Rhodes, a 1960s model who was a friend of The Beatles legend, was found on September 10 2008 after she was beaten to death and set on fire.  Her remains were discovered buried in the woods near her animal sanctuary home in Hungary.

Ms Rhodes’ Puss in Boots sanctuary was partly funded by a gift from Mr Lennon’s partner Ms Ono. She also starred in a 1969 film directed by the couple.

During an inquest in Westminster, Coroner Fiona Wilcox said, after hearing evidence from a forensic expert, that it was likely Ms Rhodes was killed by more than one person. At the hearing, the victim’s sister Judith Majlath told the court that Gyor City Police officer Horvath Zoltan Peter had threatened to kill Ms Rhodes.

Ms Majlath said: “She told me her life had been endangered. She had received phone calls and dead animals thrown into her house and locals were being nasty. She said to me she was frightened of him and genuinely felt her life was in danger. Zoltan Peter had said to her ‘I will get you eliminated’.”The court heard the policeman was “fuming” after Ms Rhodes reclaimed a dog the Mayor had taken while she was away from her animal sanctuary.

The policeman was with the Mayor when he was originally told by Ms Rhodes that he could not have the dog from the rescue centre during Easter 2002.The court heard that Ms Rhodes’ daughter Sophia Barta was attacked and beaten by Zoltan Peter months later after bursting into their family home in September 2002. Ms Bartha said the attack was so vicious she thought she would die and that a complaint was made against him – but Ms Barta was charged with assault instead.The women lodged counter claims and while legal proceedings dragged on Ms Majlath said Zoltan Peter made the threats against Ms Rhodes’ life. Ms Barta said she believed Zoltan Peter was jointly responsible with Augusztinyi, who would have let him inside the grounds, for the murder.She said: “He had absolute motive. The police had dug themselves in from the captain of the county, it went all the way to the top.”

Augusztinyi was originally jailed for 10 years but his sentence was raised to 13 years after an appeal. Ms Bartha and Ms Majlath also claimed Ms Rhodes’ death was originally investigated by Zoltan Peter.

Previous Article
How a Nazi Planner Shaped Early Israel
Next Article
“Patriot Act Author: ‘There has been a Failure of Oversight.’” (WaPo)

“Patriot Act Author: ‘There has been a Failure of Oversight.’” (WaPo)
Oct 11