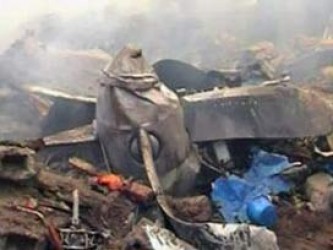 Warsaw, Poland-Poland is mourning the death of her best military pilots and Air Force commanders. Ironically as it sounds, a group of some twenty five Polish AF officers--including two generals--returned from a conference on “Flight Safety” held in Warsaw on Wednesday, January 23. All twenty people (16 passengers and 4 crew), remaining on board the plane after some left on previous stops-over, were killed in the crash. The Spanish-built brand new CASA C-295 military transport plane fell down during the landing operation near a Polish NATO airfield base, touched tree tops in a wooded area and hit the ground, exploding in flames.

I learned about the fatal crash some 20 minutes later. At that time, it was reported that possibly one person was killed and 9-10 other were missing. But gradually the news was getting worse: 7 killed, no others found, then 18 killed, then 20 killed and no one survived. Poland’s CNN--the TVN24 television channel--is active day and night, and I watched the follow-ups until late night on January 23 and 24. There were some strange, even mysterious circumstances reported on TVN24: The plane was supposed to “fall down” in complete night-time darkness from an altitude of 150-200 meters (492 to 656 feet), then touch tree tops in a wooded area and crash against the ground bursting into flames. The whole fuselage and wings have been blown into pieces by an explosion of aircraft fuel. Rescue workers reported that bodies of the victims were torn, burned and scattered over a large perimeter of the crash site, some 3 kilometers from the airfield.

Strange, the pilots didn’t report any problems to the control tower, but the plane dived down and crashed. These transporter planes in their military version have been produced by a Spanish CASA aviation concern in Sevilla since the 1970s on Boeing’s license. The newest models (C-295M), some 60 of them have been sold to many countries in Europe, Africa and Asia and--so far--they never crashed. This accident in Poland is the first. Poland had bought 10 planes, of which 6 were flying missions and 4 others were grounded for maintenance and repairs. The Polish Air Force wanted to purchase more C-295Ms, as they are considered safe, dependable and their equipment is up to the highest standards. The CASA transporters are being exploited all the time and used on long distance missions. They carry Polish soldiers and materiel to and from Afghanistan and Iraq, Bosnia, Lebanon and other Polish military combat and peace-keeping missions. In all, the C-295Ms of the Polish AF have flown over 4,500 hours. The 019 plane, which crashed on Wednesday, has flown about 500 hours since August 2007, when it was bought in Spain.

Then, what had happened on that “black” Wednesday?

A misfortune, or …? It’s certainly much too early to tell what the cause of this aviation catastrophe was. The “black box” of the plane has been found and its data is being retrieved and examined by a special flight accidents commission. No witnesses from that plane are available, no one survived the crash. Could a purposeful attempt be considered? Poland is using these planes to supply her military units and to move troops to and fro in Afghanistan and Iraq. Could some enemy diversion down the plane with twenty Polish officers? Is there any coincidence with the Flight Safety Conference, held in Warsaw this week and with the fact that the particular CASA plane, brought to Poland from the Spanish factory in August and last serviced in November 2007, carried important generals, squadron commanders and training chiefs of the Polish Air Force?

In Poland, this flight catastrophe is considered the third most important flight accident since WWII. There had been others in the past: like a crash of a Polish government plane near Szczecin (Stettin) in February 1973, killing 18, a Polish Minister of Interior - Ociepka and his Czechoslovak counterpart – Kaska in that number. In spite of the official communiqué, the cause of that catastrophe remains a mystery. Only five years ago, in December 2003, a Polish government helicopter, a dependable Russian Mi-8, fell down near Warsaw with the then Polish Prime Minister – Leszek Miller on board and 10 other officials plus 4 crew members.

Nobody was killed and some were injured. Mr. Miller broke his vertebral column and he went to Copenhagen to negotiate Poland’s accession to the European Union in a wheel-chair. Last December, I chatted with Mr. Miller at a party and he told me his and other passenger’s life was saved only due to the pilot’s high skill. The pilot was then charged with responsibility for the accident and the former PM defended him. Mr. Leszek Miller told me, he came to the party from a meeting with the survivors of the chopper crash. They meet from time to time to celebrate their survival. Some Polish media supposed the crash in 2003 was an attempt to kill the PM. Fortunately, it was not successful. Hopefully, the fatal downfall of the Polish AF C-295M on January 23, 2008 wasn’t caused by a purposeful sabotage. But who knows…

There are several cases of unsolved accidents of planes, carrying important military or political people. An earlier model of a CASA transporter plane, a CN-235, crashed in Turkey in May 2001. 28 members of Turkey’s Special Forces and six of the crew were killed. Two other accidents involving these Turkish-made planes have been reported in the same year. The Turkish Army had around 50 such aircraft in use.

“Dear David, Please accept my condolence on the plane crash. The Pakistan Army lost important officers, including General Zia ul-Haq in a C-130 crash in 1988. I think that yesterday’s plane crash must be investigated properly” Pakistani journalist, Hamid Mir wrote me yesterday from Islamabad. There have been a series of fatal military aircraft accidents in Iran, in 2005 and 2006 and earlier. Some might be victims of sabotage. The Commander of Iran’s elite ground forces Revolutionary Guards was among 13 people killed when a small military aircraft carrying them crashed in the country’s north on January 9, 2006.The small Falcon jet belonging to elite Revolutionary Guards was attempting an emergency landing when it crashed near Oroumjeh, 600 kms northwest of the Iranian capital.

A military Lockheed C-130 loaded with Iranian journalists crashed into a 10-story apartment building in a Tehran suburb on December 6, 2005 as the pilot tried an emergency landing after developing engine trouble. At least 115 people died, including 21 on the ground, Iranian authorities said. The plane was carrying Iranian journalists to cover military maneuvers in the south, and all 94 people aboard were killed. In April 2005, an Iranian military Boeing 707 with 157 people aboard skidded off a runway at the Tehran airport and caught fire, killing three people. In 2003, a Russian-made Ilyu
shin-76 carrying members of the elite Revolutionary Guards crashed in the mountains of southeastern Iran, killing 302 people. In 2002, a Ukrainian-built aircraft carrying aerospace scientists crashed in central Iran, killing all 44 people aboard. And in 1988, an Iran Air A300 Airbus was shot down by the guided-missile cruiser Vincennes over the Persian Gulf, killing 290.

No ‘third life’ for a Polish General One of the twenty victims of the recent CASA aircraft crash in Poland was General Andrzej Andrzejewski, 46, an excellent jet pilot, recently the Commander of a Brigade of Tactical Aircraft in Miroslawiec, the place of the accident. Four years ago, on the 19th of August 2003, he piloted a Soviet-made Polish SU-22 bomber on a routine mission over the Baltic Sea near Ustka, 21 kilometers off-shore. Suddenly his aircraft was hit by a “friendly” anti-aircraft missile, which was supposed to hit a target missile. He catapulted himself from the jet and “landed” on water, waiting there two hours for rescue. A rescue helicopter lifted him up and his life was saved. “I was miraculously saved” he exclaimed, adding “I got a second life!”

Now, General Andrzejewski met his death in the C-295M’s crash near the place he commanded. No third life for him, a very sad conclusion, indeed. The second Polish AF general on board the CASA aircraft, W. Usarek, left the plane at a stop-over in a military airfield near Poznan. Twenty minutes later the plane crashed. Life is a hazard, and a pilot’s life is a double hazard – they say.