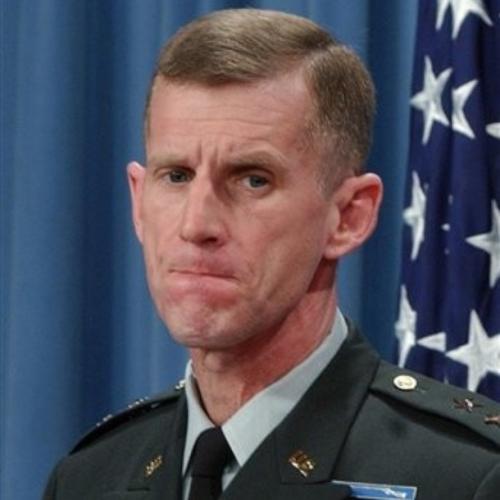 Disgraced General Stanley McChrystal was the "brains" behind the Pentagon's series of short-lived cover stories concealing Pat Tillman's death by "friendly fire," according to his mother

(CBS) Pat Tillman gave up his professional football career with the Arizona Cardinals to join the U.S. Army Rangers after September 11. In 2004, Pat was shot and killed in Afghanistan by friendly fire. But the story told by the government was quite different.

Mary Tillman, Pat's mother, documents her family's crusade to uncover the truth and expose the cover-up by senior military officials in her book, "Boots on the Ground by Dusk: Searching for Answers in the Death of Pat Tillman," which is being re-released to coincide with the August 20 release of the documentary "The Tillman Story."

On "The Early Show" Monday, Mary spoke with co-anchor Erica Hill from Mountain View, Calif., about some additional information that's coming out in the paperback version of her book, about former Gen. Stanley McChrystal's handling of her son's death.

"I wrote the book, came out in 2008, and I indicate that McChrystal was involved in orchestrating the cover-up. He falsified the Silver Star. He was very aware that Pat was killed by friendlies. And then, when he was going to be promoted to the head commander in Afghanistan, I had contacted President Obama, I e-mailed him and written a letter and contacted members of Congress, just trying to remind them that this man needed to be scrutinized very carefully. And in the end, it turned out that he was pretty much meant for that position. He was a shoo-in. Of course, he was promoted. And, that is part of the foreword."

Mary said when the Rolling Stone article was released this spring -- the one that led to the end of McCrystal's military career -- she felt validated.

"I just felt that, from what I had read about Gen. McChrystal, he was a pretty savvy individual. When I read the article, I thought the remarks that were made to this reporter, in front of this reporter, by him and his staff, were extremely arrogant and irresponsible. You know, and I say in the foreword, you know, it's understandable he might be critical of Paris and all its chic-ness when he's been in a war zone, and critical of policies he doesn't agree with. That's fine. Everyone's entitled to their opinion. But the arrogant way that he spoke about it in front of a reporter -- that disturbed me."

Pat Tillman, Hill pointed out, was known for his need for privacy. So why did his mother agree to have a documentary done on his story?

"The documentary in part is to try to present Pat as a human being and not this caricature that was created. But the biggest reason for this documentary is to point out the horrible way that he was used. His death was lied about by the military, by the government. But he's not an isolated incident. This happens on a regular basis. It's a systemic problem. It's not isolated to the Bush Administration. It's happened for years. And it's tolerated."

She continued, "Troops (are) being killed and the military lies to the family about what really happened."

Hill asked, "So, you feel that's something that is an ongoing problem for a number of families, they're not getting the full story from the government?"

Mary replied, "Yes. I believe that's true. I've met many of them."

So what really happened to Pat Tillman?

"To say specifically what happened to him, we're not sure," she said. "I think it was probably an act of gross negligence, but because there was no criminal investigation at the time of his death, there really is no way that we'll probably ever know."

In June 2002, Pat Tillman joined the Army with his brother, Kevin. Around that time, he told reporters, "My great-grandfather was at Pearl Harbor and a lot of my family has given up--you know, has gone and fought in wars, and--and I really haven't done a damn thing as far as laying myself on the line like that."

Tillman fought in the initial invasion of Operation Iraqi Freedom in 2003. He was later redeployed to Afghanistan.

On April 22, 2004, the 27-year-old died while on patrol just outside the village of Sperah, near the Pakistani border.  At the time, military officials said he was killed by insurgents during an ambush.  Tillman's family was told he had charged up a hill, forcing the enemy to withdraw, saving the lives of his fellow Rangers before being fatally shot.

At his funeral, Tillman was awarded a Silver Star, which was approved by then-Lt. Gen. McChrystal. He signed the report that said Tillman was killed by enemy fire. This, even as accounts and evidence surfaced that showed he was actually killed by "friendly fire."

About a month after his death, the Army announced that Tillman was killed accidentally -- by his own men. Tillman's parents sharply criticized the Army's handling of the incident. They were convinced that officials covered up the truth because he had become one of the most high-profile soldiers in the U.S. military and because of the negative effect it could have on recruiting.

"The Tillman Story," chronicles Mary Tillman's crusade to uncover the truth behind her son's death. The film will be released this Friday.