Throughout Rear Adm. George “Steve” Morrison's naval career, officers and their wives used to gather in his family's living room for songfests that lasted well into the night. Sometimes the three Morrison children watched from the top of the stairs.

“He would sit down at the piano and play” near his wife, the vivacious Clara, said their daughter, Anne Chewning of Thousand Oaks. “They had a lot of fun, and they met a lot of interesting people.”

A collage of photos in Rear Adm. Morrison's Coronado home shows the admiral – who died Nov. 17 of natural causes at age 89 – posing with Queen Elizabeth, with comedian Bob Hope, with singer-actress Ann-Margret.

There's also a photo of his eldest son, Jim, who became a musical icon in the 1960s with his acid-rock group The Doors – partly by rebelling against his conservative father.

“Mom and Dad were proud of Jim,” Chewning said, but they also were confused and pained by his career path, drug use and death in Paris at age 27. “I don't think Daddy ever understood the impact Jim had on music.”

Rear Adm. Morrison was born Jan. 7, 1919, in rural Georgia as the son of a railroad worker. He grew up in Leesburg, Fla., and worked hard to enter the U.S. Naval Academy, perhaps with help from a relative who was an admiral.

“It was the only way he could afford to go,” said his son Andy Morrison of Pahoa, Hawaii.

Rear Adm. Morrison went to Pearl Harbor to serve aboard the mine-layer Pruitt shortly after his graduation in February 1941. There he met his future wife, Clara Clarke, who had followed her sister from their native Wisconsin.

Aboard his ship, Rear Adm. Morrison witnessed the Japanese attack of Dec. 7, 1941, from across the harbor. He married Clara soon after and was sent to Florida for flight training in spring 1943. 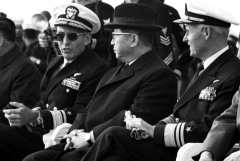 South Korean Prime Minister Chung Il Kwon is flanked by his hosts, Rear Adm. George S. Morrison, left, commander of Carrier Division Nine, and Vice Adm. William F. Bringle, commander of the U.S. 7th Fleet in the Pacific, as they watch jets from Air Wing 21 take off and land on the deck of the carrier USS Hancock.[/caption]

Rear Adm. Morrison flew combat missions during the last year of World War II and again during the Korean War.

During his lengthy career, he worked on secret nuclear projects at Los Alamos, N.M., served as operations officer aboard the aircraft carrier Midway and commanded the fleet of ships in the Tonkin Gulf incident that led to the escalation of the war in Vietnam.

He took command of the carrier Bon Homme Richard on Nov. 22, 1963. His first act as skipper was to announce the assassination of President Kennedy.

After earning flag rank at age 47, Rear Adm. Morrison weathered his son's very public rebellion, stardom and death while serving in high-profile Navy posts in the Pentagon and the Pacific. He never mentioned Jim publicly, but he found it strange to visit friends' homes and see posters of his son on the bedroom walls of their teenage children.

“He never told people (in the Navy),” Andy Morrison said. “But the young guys all knew.”

Rear Adm. Morrison told family that his most rewarding tour was his last – commanding U.S. forces in the South Pacific from his headquarters in Guam. He was beloved by the people of Guam, said Bruce Nichols of Poway, a longtime friend who served as his staff aide from 1974 to 1975.

Rear Adm. Morrison dealt with a flood of at least 140,000 South Vietnamese refugees who swamped the island after the fall of Saigon in April 1975. He created a tent city on an abandoned airfield to accommodate them while they waited to find new homes in the United States.

Later that year, Rear Adm. and Mrs. Morrison retired to Chula Vista. He avoided the usual Navy reunion groups, but played golf up to five times a week. He also took classes in Italian and ancient Greek, the latter so he could read the Bible as it was originally written.

The Morrisons traveled often, including a 1990 trip to Jim's grave in Paris. Rear Adm. Morrison installed a plaque he had crafted with an ambiguously worded Greek phrase that Chewning said meant “true to his own genius.” 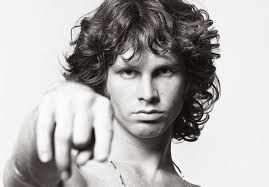 The Morrisons moved to Coronado about six years ago.

Close friend Earle Callahan said Rear Adm. Morrison declined in health after his wife died in 2005, though he still rode his bike around the island and hosted what he called “Steve's Happy Hour” at his home on H Street.

“We'd sit around and carry on about the old times,” Callahan said.

Nichols said his son Brandon revered Rear Adm. Morrison and was inspired to attend the Naval Academy because of him. He said Brandon had looked forward to coming home and telling his mentor that he been selected to become a naval aviator after his graduation next spring.