But to many Vietnamese, the president’s words rang hollow, as they either personally remember or have learned how American bombs, bullets and chemical weapons killed, maimed or displaced millions of innocent people, and how successive American administrations of both parties waged a decades-long war for essentially ideological reasons—to deny the Vietnamese people the freedom to choose the leaders and the destiny they wanted.

From the early 1950s until the early 1970s, America “protected Vietnam from communism” by supporting a series of brutal military dictators in South Vietnam. Richard Nixon, the last of four Vietnam-era presidents, claimed the war in southeast Asia was being fought with “a degree of restraint unparalleled in the annals of war.” But secret White House tapes captured Nixon’s candid barbarism toward the Vietnamese, who he called “little cocksuckers.”

“The United States cannot lose,” said Nixon, as the United States was losing the war. “We’re going to cream North Vietnam… For once, we’ve got to use the maximum power of this country… against this shit-ass little country.”

When national security advisor Henry Kissinger, who had no compunction about backing genocide, war and military coups around the world when they served America’s “national interest,” voiced concerns that the world viewed Nixon as a “butcher,” the president, who wanted to use nuclear weapons to end the war, fumed, “You’re so goddamned concerned about the civilians and I don’t give a damn. I don’t care.”

From the earliest days of the war, it was clear that the United States didn’t give a damn about the Vietnamese people, only about containing the communism that so many of them wanted. In 1961, President John F. Kennedy approved the forcible relocation of millions of South Vietnamese into “strategic hamlets”surrounded by barbed wire, minefields and armed guards in an unsuccessful attempt to isolate rural peasants from the communist Viet Cong insurgents. Peasants’ homes—and their connections to revered ancestors—were burned to the ground. Many who resisted the forced resettlement were summarily executed. This, and support for the ruthless but fiercely anti-communist Ngo Dinh Diem regime, only served to swell the ranks of the ever-growing communist insurgency.

Savage atrocities committed by US troops were endemic to the conflict. During the Phoenix Program, a CIA effort to terrorize South Vietnamese who might sympathize with the Viet Cong, tens of thousands of people were killed. On one 1969 Phoenix mission led by future US senator and Nebraska governor Bob Kerrey, Navy SEALs raiding the village of Thanh Phong in search of a VC leader killed 13 unarmed women and children, including a baby who cried as “blood and guts were splattering everywhere,” according to one of the SEALs. “Standard operating procedure was to dispose of the people we made contact with,” Kerrey coldly acknowledged. One of his fellow SEALs told the New York Times how Kerrey had held an old man down while he slit his throat as some of the other squad members killed a woman and three children with knives. “Quite often it was a matter of expediency just to eliminate a person in the field rather than deal with the paperwork,” Phoenix intelligence officer Barton Osborne explained.

US troops in Vietnam often operated in “free-fire zones” where they were free to shoot whoever they pleased. CIA operative Robert Ramsdell, who was instrumental in planning and executing the wholesale slaughter of 504 unarmed villagers, mostly women and children—many of them gang-raped before being killed—at My Lai, explained that this was because every Vietnamese was considered a potential VC sympathizer. When funding for Phoenix Program was threatened in the wake of My Lai, President Nixon was furious. “No,” he demanded, “We’ve got to have more of this. Assassinations! Killings!” The funding continued, and so did the atrocities.

Operation Speedy Express saw thousands of innocent Vietnamese slaughtered in what one participant called “a My Lai each month for over a year.” Obsessed with enemy body counts, Gen. Julian Ewell, known by his men as the “Butcher of the Delta,” pressured his troops to kill as many Vietnamese as possible. His boys dutifully delivered. Helicopters slaughtered innocents from the sky, peasants were gunned down while working their fields, civilians were forced to clear land mines and booby traps, More than 10,000 “gooks” were “wasted.”

Testifying before the Senate in 1971, future senator and secretary of state John Kerry, a highly-decorated Vietnam veteran, described the actions of US troops during the war:

“They had personally raped, cut off ears, cut off heads, taped wires from portable telephones to human genitals and turned up the power, cut off limbs, blown up bodies, randomly shot at civilians, razed villages in fashion reminiscent of Genghis Khan, shot cattle and dogs for fun, poisoned food stocks, and generally ravaged the countryside of South Vietnam, in addition to the normal ravage of war and the normal and very particular ravaging which is done by the applied bombing power of this country.” 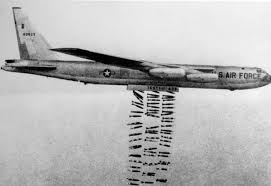 Another war crimes whistleblower, Army Specialist Michael Farrell, testified at the 1971 Winter Soldier hearings that his platoon sergeant gave him the following orders: “If there’s a woman in a hooch (hut), lift up her dress… and tell by her sex; if it’s a male, kill him; and if it’s a female, rape her.”

An incomplete Army investigation of US war crimes in Vietnam contains 9,000 pages of documents detailing hundreds of confirmed incidences of atrocities committed by American troops. These were not isolated incidents; they occurred in every single Army division in Vietnam. The Los Angeles Times told the story of one Private James Henry, only 19 when deployed to Vietnam, who witnessed war crimes beginning on his very first patrol, when a fellow soldier sexually assaulted a teenage girl walking by a rice paddy. Next an unarmed 12-year-old boy was captured executed. Days later, an old man was beaten and thrown to his death off a steep hillside. Later, soldiers snatched a sleeping man from his hut and used him for target practice. Another unarmed man was thrown under an armored personnel carrier and repeatedly run over. But the worst was yet to come. On February 8, 1968, 19 women, children, babies and elderly men were rounded up by Henry’s platoon and systematically murdered. Some of them were gunned down as they begged for their lives. Staff Sergeant Wilson Bullock also witnessed this bloodbath: “All of these people were lined up and killed,” he testified, “When… the shooting stopped… I observed a naked Vietnamese female run from the house to the huddle of people; [she] saw that her baby had been shot. She picked the baby up and was then shot and the baby shot again.”

The soldiers were just following orders; they’d been told to “search and destroy and kill anything in the village that moved,” and they performed their grisly task with chilling obedience. Sadly, John Kerry, Private Henry and other Vietnam veterans who went public with their eyewitness accounts of atrocities were labeled as liars and traitors even though the Army has confirmed every last one of the war crimes detailed above. And from 9,000 pages of documents chronicling hundreds of American war crimes, only 57 courts-martial resulted. Of these, only 23 were convicted. The most severe punishment, for the rape of a 13-year-old girl, resulted in a seven month prison stint.

For sheer brutality against innocent Vietnamese civilians, it’s hard to beat the Tiger Force. In 1967 this elite unit of 45 paratroopers went on a seven month murderous rampage across the Central Highlands, torturing and killing hundreds of innocent, unarmed civilians. The Toledo Blade exposed Tiger Force’s shocking crimes in a series of Pulitzer Prize-winning articles in 2003. William Doyle, a Tiger Force sergeant and platoon leader, admits he killed so many civilians that he lost count. “We killed anything that walked,” he said. “We would go into villages and just shoot everybody,” confirmed former medic Harold Fischer, “We didn’t need an excuse. If they were there, they were dead.” Private Sam Ybarra executed a teenage boy so he could have his tennis shoes; Ybarra also slit the throat of a prisoner before scalping him and adorning his rifle with the “trophy.” Tiger Force members were fond of chopping off the ears of their kills and wearing them on necklaces fashioned from shoelaces. Others kicked out the teeth of their victims to collect gold fillings. No one was safe from Tiger Force’s fury. They dropped grenades into a bunker where women and children were huddled for shelter. They raped a 13-year-old girl then slit her throat. They sawed the head off of a baby so a soldier could steal its necklace. Tiger Force members were then awarded medals. Not one of them was ever tried for their crimes.

In neighboring Laos, a small, landlocked and desperately poor country populated mostly by subsistence farmers that also happened to be located along the North Vietnamese supply lines that snaked down to South Vietnam and Cambodia, the United States subjected the population to the heaviest aerial bombardment in human history. More bombs were dropped on Laos than were dropped in all of World War II, with some 80 million cluster bombs among the 2 million tons of ordnance unleashed. These cluster bombs ejected many smaller bomblets, some the size of golf balls, that rained death and destruction down on hapless peasants. The millions that didn’t immediately explode became death and dismemberment waiting to happen; children are particularly attracted to the brightly-colored bomblets because they resemble toys or fruits. Over 10,000 Laotians, many of them children, have been killed or horribly maimed by unexploded ordnance since the bombing ended in 1973.

Besides unexploded bombs, American land mines and chemical weapons continue to kill, disfigure and poison innocent civilians in Vietnam, Laos and Cambodia to this very day. The worst of these is Agent Orange. The United States sprayed 80 million liters of this chemical weapon, made mostly by the Monsanto Corporation and Dow Chemical, over the jungles of Vietnam in a bid to deny the enemy cover, resulting in irreparable damage to the rainforest ecosystem and the poisoning of over a million Vietnamese civilians, soldiers and US troops. The resulting dioxin poisoning of the soil has caused three generations of the most hideously disfiguring birth defects, deformities that will continue to affect countless babies yet to be born. Today, around 800,000 Vietnamese suffer serious health problems and require constant medical care as a result of exposure to Agent Orange.

The United States has gone from destroying Vietnam with weapons to selling weapons to Vietnam, as President Obama has now lifted the decades-old US embargo on arms sales to Hanoi. This provocative move is meant to counter a rising China, with Beijing warning of a new “regional tinderbox.” But conflict is big business, and as General Smedley Butler, once the most decorated US Marine in history, noted over 80 years ago, “the flag follows the dollar and the soldiers follow the flag.” American commercial and strategic interests have helped bury the hatchet from what was, until the current unending war against terrorism, the longest war in US history. But instead of—or at least in addition to—lecturing the Vietnamese on human rights, Obama would do well to acknowledge and apologize for the countless human rights violations committed during America’s disastrous intervention in Vietnam.