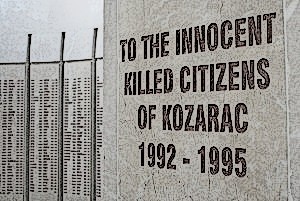 A new ruling by the ICTY means that many war criminals may be acquitted as there is no evidence that they specifically directed the genocides in former Yugoslavia. Photo: The Advocacy Project

The credibility of the International Criminal Tribunal for former Yugoslavia (ICTY) in the Hague has been questioned because of a new ruling requiring evidence that war criminals “specifically directed” atrocities.

The ruling came after the decision of the appeals chamber in February to acquit General Momcilo Perisic, whose staff was accused of permitting crimes committed by the Bosnian Serb army.

Perisic was accused of having provided weapons and officers, making the genocide possible.

The appeals chamber, however, stated that there was no evidence that what Perisic supplied to the Bosnian Serb army was used to commit crimes.

In May, the ICTY acquitted other two Serbian criminals, Jovica Stanisic and Franko Simatovic. The judges said that the men had directed and paid special secret combat units during the wars in Croatia and Bosnia from 1991 to 1995 but that they weren’t directly responsible for the crimes committed by the units.

Referring to the ethnic cleansing operations in 1992 the tribunal said: “The Chamber found that the Accused organised the involvement of the Unit in the operations in these municipalities. However, the evidence did not establish that the Accused personally directed the Unit during these operations or that they had issued orders or instructions to commit the aforementioned crimes.”

The issue, in fact, revolves around the legal definition of crime and intent. Eric Gordy, professor of South East European politics at the School of Slavonic and East European Studies in London, commented, saying that the verdicts give a new definition of intent: “It is not enough to provide the resources to commit a crime but that you need specific knowledge of it.”

This definition of intent is neither new nor surprising. If providing the resources to commit a crime were enough to be prosecuted, all the gun manufacturers would be sentenced only by selling weapons to potential criminals.

However, Chuck Sudetic, a former ICTY analyst, remarks that the new rule might have a dramatic outcome as it won’t bring to justice the highest-ranking people responsible for letting war crimes happen but only those who actually committed the crimes. As he concluded: “Only the actual killers will be punished, not the mass murderers.”

The Evolution of the NSA’s XKeyscore
Aug 15