SAN FRANCISCO — A woman who in late April stood in front of dozens of people and claimed her father was the infamous Zodiac killer will be questioned by the San Francisco Police Department on Wednesday after DNA evidence linked her to the famous case. ... 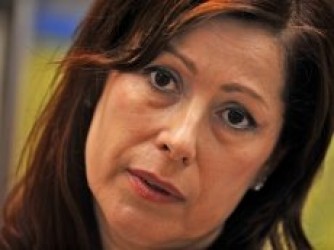 San Francisco police inspectors have confirmed they will interview Deborah Perez, the onetime Orange County resident who says her father was the infamous Zodiac.

Perez is scheduled to meet next week with Inspector Kevin Jones, the investigator assigned to the Zodiac case, and Lt. Michael Stasko, head of the homicide unit.

Police attribute at least five killings in and around the Bay Area during the late 1960s to the Zodiac, and believe there may have been more. On Oct. 11, 1969, the Zodiac killed 29-year-old cab driver Paul Stine in San Francisco.

Her father kept Stine's glasses as a souvenir, Perez claims, and wore them during several of the subsequent murders. She found the glasses among some of her father's belongings and wants San Francisco police to examine them to see if they can be linked to the victim through DNA tests or a prescription comparison.

"I thought," Perez has said, "they were my father's glasses all the time."
The glasses have not been tested.

"Nothing's going to be done until after we interview her," Stasko said.
Perez, 47, now a Corona resident, held a sidewalk press conference in downtown San Francisco in late April to say she believes her father was the Zodiac, a claim that brought her world-wide attention.

San Francisco police investigators contend they had little chance to hear her story before then.

"The last time she was in San Francisco we were notified a very short time before the press conference," Stasko said. He and a captain got only a brief chat with Perez and her attorney at a hotel before she made her claims public, and the situation "wasn't very conducive to doing a homicide interview," he said.

That's why, Stasko added, investigators need to do a more thorough interview before authorizing a $3,500 DNA test on the glasses.

Perez has said she had no idea her father, a carpenter who died in 1983, might be involved until she saw a composite sketch of the Zodiac killer on America's Most Wanted in 2007. She then began to conduct Internet research and recognized some of the items connected to the killings.

She said she accompanied her father on some of the killings and wrote some of the bizarre letters that helped to make the Zodiac famous. Perez asserts she and Guy Ward Hendrickson lived in Santa Ana at the time of the murders.

Perez's psychologist has backed her, but her claims have brought her criticism.

A woman named Janice Hendrickson, who says she is Guy Ward Hendrickson's daughter from his first marriage, has claimed Perez's story is false and threatened to sue for defamation.

Other purported relatives in Guy Ward Hendrickson's native North Dakota have also said he was not involved in the Zodiac killings.

There's a major roadblock in the Federal Bureau of Investigation's probe into the legendary Zodiac case. It's a lack of cooperation, not from a person, but from the San Francisco Police Department, FBI sources said.

The FBI began collecting DNA evidence last year, but the SFPD - which is the agency that has most of the original evidence - isn't sharing. There may also be another roadblock, sources said. The FBI has in their possession a copy of a report alleging someone made changes to what are supposed to be authentic Zodiac letters.

The changes are subtle.

The Zodiac had seven victims in Northern California. In numerous letters, the psychotic killer revealed details of the attacks, taunted police and threatened to carry out more murders.

Dennis Kaufman claims his efforts to prove his late step father, Jack Tarrance, is the Zodiac uncovered changes to what are supposed to be copies of authentic Zodiac writings.

"They are different significantly," said Kaufman.

The theory is now capturing the interest of the FBI, whose agents are looking at a report complied by Nanette Barto. Barto is a forensic document examiner. She believes she identified dozens of similarities in the writings of Jack Tarrance and the Zodiac, and discovered the changes.

"At the bottom of each of these letters, where you see these heavy little dots, indicators of somebody writing slow and coming to a stop, almost as if they didn't want to overshoot it or add anything extra to it," explained Barto.

The tracing, Barto believes, is an effort to make the ink throughout the letter consistent, trying to hide a single alteration.

"I believe the 'a' in watch was altered, this previously had a bell top 'a'," said Barto.

The lines blend together, but when compared to an older copy, the bell top or hood over the 'a' appears to have been removed.

Barto claims to have uncovered several cases of altered a's.

Changing a single letter may not appear significant, but in the world of handwriting analysis it can be crucial.

"One missing similarity can outweigh all similarities found," according to Barto. Meaning, Jack's Tarrance's a's were so distinctive, most containing that extra line above that never finding one could create doubt.

When asked if it looked like someone intentionally altered the letters, Bart replied, "Absolutely."

Dennis claimed the changes began to appear after he showed his stepfathers handwriting to the San Francisco police department in 2001, and posted samples on the internet.

Who made the changes is unknown, but where they showed up is clear.

"We know in Graysmith's books they've been altered as well as Tom Voight's website," claimed Kaufman.

An author and a webmaster, Tom Voight runs Zodiackiller.com. The site said it is committed to archiving all case related material. The changes are also found in print.

Robert Graysmith wrote two books, 'Zodiac' and 'Zodiac Unmasked.' The books were the basis for the 2007 movie "Zodiac." Both books contain the same Zodiac letter, but are clearly not the same. Numerous markings were removed.

The text could have been cleaned up to make the letter easier to read, but why change the 'a'? Was it intentional or perhaps improvements in the quality of the copies?

Calls and e-mails to inquire which is the true text to Voight did not get a response. Attemps to contact Greysmith were also unsuccessful.

Handwriting is one piece of a much large puzzle the FBI is assembling to determine if Jack Tarrance and the Zodiac are one in the same.

Last August, the agency began running DNA tests on multiple items turned over by Dennis Kaufman, including a hood similar to one worn by the Zodiac.

If handwriting plays an important role, why wouldn't the FBI go straight to the originals?

Because some in the FBI claim the SFPD is slowing down the FBI investigation.

The FBI has been asking since the year 2000, nine years, to view the police department's evidence, so far they maintain they have been shut out.

Only one Zodiac murder was committed in San Francisco, but the department has the majority of the Zodiac letters and the only partial DNA profile of the killer.

The SFPD declined to respond to multiple requests specifically asking if they would allow the FBI to examine their evidence.