Neo-Nazi Radio Program ‘Going Mainstream’ in the Party of Trump 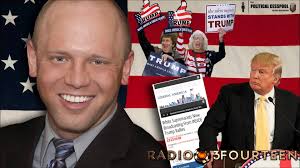 The Political Cesspool is one radio program that lives up—or rather, down—to its name. Hosted by neo-Confederate white nationalist James Edwards, the show is constantly racist, anti-Semitic, and preaches a poisonous mixture of returning America to a “founding stock” of white Europeans while encouraging secession and destruction of the central government.

Not surprisingly, the show is also nationalist, isolationist, and fixed on the idea of eliminating any immigration but that of white Europeans. Until recently, even the most ardent conservatives didn’t want to be associated with Edwards. But with the party of Trump, that’s all changed.

Edwards boasted in February that he had “attended a Donald Trump rally in Memphis on Saturday night as a fully credentialed member of the media and enjoyed the unique experience of being able to air a live broadcast of The Political Cesspool Radio Program from inside the press pen while the event was in full swing.”

Edwards then set up camp at the RNC, making no attempt to disguise the nature or focus of his program.

Edwards During RNC Show: “We’re Unequivocally Pro-White. This Is A Show That Advances The Interests Of European-Americans.”

In his broadcast, Edwards bragged that The Political Cesspool was “going mainstream,” not because it was pulling back from its neo-Nazi, conspiracy theory-laden views—but because the Republican Party was moving to meet it.

Edwards: “Trump Will Be The First Republican Nominee That I Have Ever Voted For.”

[Edwards] also predicted that the “ludicrous, malicious, disgusting maggots, the sniveling little worms” in the media will “come down” on him for his interviews with members of Congress.

Quite a compliment, coming from the likes of James Edwards.