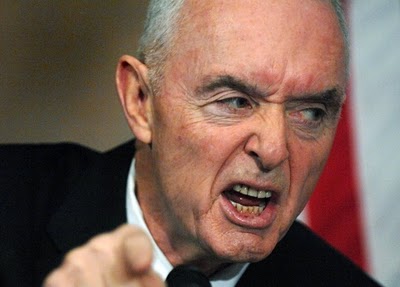 WASHINGTON – NOVEMBER 14: General Barry McCaffrey (R), U.S. Army, speaks during a news conference at the U.S. Capitol November 14, 2007 in Washington, DC. The panel discussed issues relating to the over streching, and retention rates of U.S. forces in Iraq and Afghanistan. The also discussed the costs associated with the resetting of military assets.

Since NBC doesn’t bother to point out the conflicts of interest held by oft-used military analyst Barry McCaffrey, Huffington Post and others have. McCaffrey has appeared on the network’s cable subsidiary, MSNBC, no less than 10 times in the past month to talk about the importance of staying in Afghanistan and training local security forces. With each appearance, McCaffrey was identified only as a retired general—and not someone who sits on the board of DynCorp International, a security company currently getting paid by the U.S. government to develop Afghanistan’s police force, build barracks and do the laundry of U.S. troops. According to Forbes, the wars in Iraq and Afghanistan account for 53% of DynCorp’s $3.1 billion in annual revenue.

MSNBC also hasn’t bothered to point out his relationship with Army General David Petraeus, the head of U.S. Central Command, for whom McCaffrey recently completed a report about the war. McCaffrey has been seen praising Petraeus on TV, while criticizing President Barack Obama’s proposed troop-withdrawal deadline.