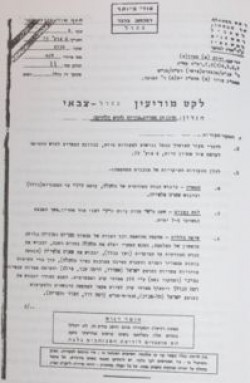 The top secret Aman/Research report (marked "urgent"), distributed six and a half hours before the Yom Kippur war broke out, detailing the Egyptian and Syrian plan of attack. The source was Dr. Ashraf Marwan, now thought to have been a double agent.

An Egyptian financier, suspected of being an Israeli double agent, has been found dead outside his flat in the UK in "unexplained" circumstances.

The Metropolitan Police could not confirm the man's name, and said they awaited formal identification and for next of kin to be informed. Officers were called at 1.40pm yesterday.

A spokesman said: "He appears to have fallen from a balcony." Inquiries into the circumstances surrounding his death continue.

"The death is being treated as unexplained."

The 62-year-old grandfather died amid controversy about his role in the intelligence and business worlds.

There were recent demands for an investigation after Egyptian papers contained reports from Israeli media about Mr Marwan's possible role as a double agent involving the 1973 Yom Kippur War.

Mr Marwan, who worked in private business in the UK, was married to wife Mona and had two sons, Gamal and Ahmed.

His name cropped up in Myth Versus Reality: The Yom Kippur War - Failures And Lessons, a book published in 2004 by Eli Zeira, who acted as Israeli chief of military intelligence during the war. The author suggested that Mr Marwan tipped Israel off about the start of the war, but leaders ignored the warning and were caught by surprise when Egypt and Syria attacked.

Media reports in Israel have claimed that Mr Marwan walked into the Israeli embassy in London in 1969 to give information but he was turned down.

He was later allegedly recruited by the Israeli intelligence agency, Mossad. Mr Marwan's name has also cropped up in reports about weapons trading in the Middle East.

The Egyptian government has not commented on the allegations.

Mr Marwan was the son of a military officer in Nasser's presidential guard. He joined the army after a degree in chemical engineering.

Formerly an assistant to Nasser, after Nasser's death in 1970 he became a political and security adviser to President Anwar Sadat.

In the 1970s, Mr Marwan was head of Egypt's military industry complex before retiring and moving to the UK 25 years ago.