‘Muslim Massacre’ Computer Game a Parody on US Foreign Policy? 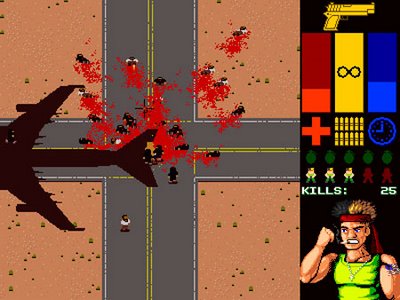 ” … The aim of the ‘game’ is to be parachuted into the Middle East and, once there, wipe out the entire Muslim population. … “

A computer game entitled Muslim Massacre is the latest in a long line of ‘how low can you go” nominees to be found on the internet and, in fairness to the moron who designed this, it would take something sensational to beat it.

The aim of the “game” is to be parachuted into the Middle East and, once there, wipe out the entire Muslim population. Needless to say it has outraged the Muslim community and is being condemned far and wide, basically by anyone who has an ounce of brains.

In light of our preoccupation with the merits and demerits of a local cartoon this week, I was fascinated to find out more about the mentality of the genius who came up with this game. In the case of the cartoon, Zapiro had a definite message in mind when he drew it. The fact that I found it to be OTT does not mean that it lacked validity, simply that I felt the vehicle employed to bring it home was inappropriate.

In the case of Muslim Massacre there was no such dilemma. The only message that this brain donor had in mind when he put this together was that Muslims are the baddies and killing them, even by remote control, would be great fun.

Where the system breaks down is that people are trying to rationalise why he put the game together in the first place. What was the thinking behind the game? What message was he trying to convey?

I can thankfully answer that for the bewildered and the bedazzled: he’s trying to tell us that he should be neutered and then incarcerated, never to be allowed out again, with a message pinned to his chest “under no circumstances should this be allowed to breed”.

Lets take a closer look at the Mindless Moron from Lamuncha:

“The game’s creator, a freelance programmer who uses the name Sigvatr, described his product as ‘fun and funny’. There has also been some suggestion that it may be a satire of American foreign policy. Sigvatr, whose real name is Eric Vaughn, was unavailable for comment. But in an internet discussion of Muslim Massacre, he seemed to indicate that the game was not a parody.

‘I think it’s pretending to be legitimate commentary and I’m sure there will be lots of people who defend it on those grounds, but ultimately it’s just a game where you blow the gently caress (slang for a common swear word) out of Arabs,’ he wrote.

‘Anyone is free to believe whatever they won’t (sic) though, because I don’t even know how to interpret it myself anymore. The bottom line is that I enjoyed making it and it’s fun to play.’ “(Mail on Sunday UK)

As is clear from the “designer” (by his mother maybe), this is not intended as anything more or less than ‘having fun’ while playing a game about killing Arabs. Reading anything more into it is giving this genius credit for something that never crossed his mind (such as it is).

““Anyone is free to believe whatever they won’t (sic) though, because I don’t even know how to interpret it myself anymore. The bottom line is that I enjoyed making it and it’s fun to play.”

But later, he added: “The Muslims represented in the game aren’t meant to be based on actual Muslims.

“If I was to try and come up with a meaning for the game at this moment, it would probably be something along the lines of metaphorically destroying the stereotypical depiction of a Muslim.” (Times of London)

As he says if he had to come up with a meaning for the game it would be something along the lines of … where in fact he would be far better off spending the time sniffing lines.

“The game was designed by a 22-year-old, US-born programmer who calls himself ‘Sigvatr’. His personal website says he was born in “a military hospital to two loving military grunts”.

The site adds that he works part time “as a service station attendant serving potato chips, cigarettes and soda to drunken bar hoppers and stoners at three in the morning”.

It says he lives with his “beautiful wife Sunny in a small rented room in Brisbane, Australia”.” (Sky News)

Yep, G’day cobbers this genius is one of yours. Anyone from Brisbane? Chuck another shrimp on the Barbie … oh and while you’re at it mate, chuck this shrimp on as well. Mind you with his thinking he could be the Aussies’ answer to Klaus Barbie …

For the rest of you lot, click on the link to Sky above where you’ll find a picture of this wenner. Don’t all write in at once but look closely and tell us whether you can spot the lobotomy scar through all that hair.

For my part, what I find so rewarding is that this genius has called it exactly what it is — crap. Dangerous, hate-seeking, violence inspiring, insensitive crap, but crap nonetheless.

It has nothing to do with making a statement about US foreign policy, trying to convey some deeper meaning or trying to disspel Muslim stereotypes (unless by disspell you actually mean you’ve misspelled “expel” every Muslim from the face of the Earth) as some lawyer is going to try and convince us when they try to remove it from circulation.

Previous Article
Mexico, US Find no al-Qaida Links Since 9/11
Next Article
Gonzales Violated Security Rules with Spy Docs, Lied to Cover it Up

Gonzales Violated Security Rules with Spy Docs, Lied to Cover it Up
Sep 12