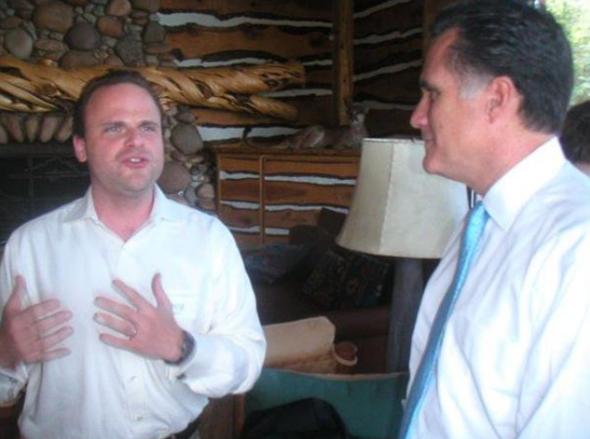 Is this why Republicans are so eager to redefine rape?

Greg Peterson–self-promoting glad-hander, best friend to a whole slew of Republican Big Name politicians, host of many GOP fundraisers in Utah, and vicious serial rapist–has decided to spare his victims the additional trauma of going through court proceedings, as he has apparently died in the same cabin in Heber, Utah where several of the rapes were said to have taken place. Of course, by choosing suicide, he also denied his victims their day in court.

After Peterson missed an appointment with his attorneys after being released on bail, Wasatch County, Utah sheriff’s officials were dispatched and found Peterson dead from a self-inflicted gunshot wound to the head.

Peterson, 37, was charged by authorities this July and was facing 25 charges of assault, rape and kidnapping. He apparently met his victims on Facebook, at church functions, and on Mormon dating websites. (Thump And Whip claims that the charges were “nine counts of forcible sexual abuse, seven counts of rape, three counts of object rape, two counts of aggravated kidnapping, forcible sodomy, assault, burglary and sexual battery.” So, there’s that. Make of it what you will.)

One Peterson Facebook invitation allegedly read: “Tell guard at gate that u r guests of Greg Peterson’s Moose Lodge on Witts Lake. Doesn’t that make you feel special? It should.”

Peterson at his Rape Cabin

Ryan J. Reilly of TPM Muckraker reports that four of the attacks are said to have taken place in March, July and December in 2011 and April 2012; the time a fifth attack took place has not been made clear. One victim, a (Mormon) church acquaintance, says Peterson forced her inside his cabin after telling her he had a gun. Four of the victims testified that Peterson had fondled them over their clothing without their consent.

Four separate times, prosecutors say, Gregory Peterson lured women under the pretext of a movie or lunch — and sexually assaulted them. He kept one captive in his mother’s house for several days, they said. He threatened to report another, whose visa had expired, for deportation, charging documents alleged. And in each case, authorities said, he forced the women to engage in sex acts by pointing to guns he possessed. [...]

The first woman, identified only as S.M., described meeting Peterson at a church event in March 2011 and agreeing to go to a movie with him. Instead of going to the theater, she said, he drove her to his cabin, assaulting her both on the drive and during the night. The woman said she was scared because there were weapons both in the car and in his cabin. Peterson drove her back to her car the next morning, she said.

The other women said they met Peterson online. One said Peterson asked her to dinner in July 2011 but instead drove her to his cabin, sexually assaulting her on the way and through the night. She said he talked about her expired visa and threatened to deport her. Peterson then drove her to his mother’s house and kept her there for three days before driving her home and assaulting her again, she said. [...]

A bail bondsman found Peterson in his Wasatch County cabin Tuesday evening while checking on him because his ankle monitor signal was getting weak, Sheriff Todd Bonner said.

Peterson claimed to have an MBA in Finance from Brigham Young University, and also claimed that he was a certified financial planner who owned an Orem-based wealth management company and an online trading website. ...