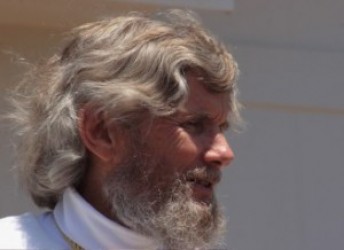 " ... 'One day I was in my trailer just relaxing and there was nothing on my mind in particular and then God said to me you are the Messiah,' Travesser recalls. ... "

May 5 (Bloomberg) -- Michael Travesser says being a cult leader requires great sacrifice. In his case, that includes bedding his son's wife, getting naked with teenage girls and pocketing his followers' worldly possessions.
So how does a guy with two failed marriages, a bad childhood and the look of an underfed bridge-dweller pull this off? You can find out by watching "Inside a Cult,'' a fascinating National Geographic program that airs May 7 at 10 p.m. New York time.

Travesser, 66, allowed a crew to spend seven months filming what he promised was a run-up to Judgment Day, which he had penciled in for Oct. 31, 2007. While the world didn't end as scheduled, we do hear startling admissions from some of the 56 Strong City cult members, including Travesser's son Jeff, a former San Francisco cop.

Like David Koresh of Waco fame, Travesser started out as a Seventh-day Adventist preacher. He left the church in 1987 with a handful of followers and eventually moved to Union County, New Mexico, where Travesser got his Big Assignment.

"One day I was in my trailer just relaxing and there was nothing on my mind in particular and then God said to me you are the Messiah,'' Travesser recalls.

Not everyone said amen to his extravagant claim. Some followers departed, though two members' wives, supposedly under divine guidance, offered themselves as ``witnesses'' to his divinity by having sex with him. Since the women were doing God's will, Travesser told their husbands, they should direct any complaints heavenward.

Travesser has a crazed look as he declares himself "the embodiment of God. I am divinity and humanity combined.'' Yet other times during the hourlong show, one senses there's a touch of the fox in this old loon.

In one bizarre segment, he tells of being "knocked to the floor'' by the Almighty, who informed him that "consummation was imminent.'' At that very moment, his son's wife was experiencing an urge to visit Travesser and "ask for the consummation tonight.''

It turned out to be a harmonic convergence. When asked if that "consummation'' was the only one, a sly grin appears on Travesser's face.

"Could you not answer that question yourself?'' he responds. "Do husbands and wives only consummate once?''

Cult leaders often commandeer the sex lives of their followers. Koresh did it, as did Jim Jones.

Travesser plays the part of the holy roller with gusto. Once, he says, seven virgins stripped down and climbed into bed with him. He insists they didn't have sex, even though one of the virgins threatened to kill herself if he didn't deflower her. Such are the sacrifices of being God's right-hand man.

The show includes a look back at other cults, including Marshall Applewhite's Heaven's Gate, whose 39 members committed suicide in 1997 so they could hook up with a spaceship hiding behind the Hale-Bopp comet.
Relatives of some Strong City cultists feared Travesser had similar intentions for Oct. 31, 2007.

A few days prior to the big event, Travesser's son promised the camera crew a "defining moment'' when the "world will be judged. You can take that to the bank. We're done.''

On Judgment Night, with a half moon hanging overhead, the camera crew waits outside the compound's front gate. Just after midnight, the cultists come marching down the road, screeching deliriously with Travesser in tow.
Travesser had hinted that he would appear in a new body, but if he did, it looked suspiciously like the old one.

(Dave Shiflett is a critic for Bloomberg News. The opinions expressed are his own.)