The evangelical Christian politician's co-author was revealed to have been found by police to have molested a girl when she was just 11, and continued the abuse for three years.

John Perry, a prolific author who helped co-write hit movie The Vow, was not prosecuted because the statute of limitations had passed by the time police became involved, Buzzfeed News reported as it revealed the abuse.

Perry is the second associate of Huckabee to have been revealed as an abuser, after Josh Duggar's abuse of his sisters was disclosed.

Perry today told Daily Mail Online that 'the parties involved were reconciled and restored years ago' and that the investigation had been prompted by an individual who had a 'vendetta' against his former church.

Documents uncovered by Buzzfeed News show that Nashville, Tennessee, police investigated Perry in 2012. There is no suggestion Huckabee knew anything of the investigation into his co-author.

Prolific author: John Perry, 62, was the author of Huckabee's campaign memoir Do The Right Thing, published in 2009, as well as books under his own name 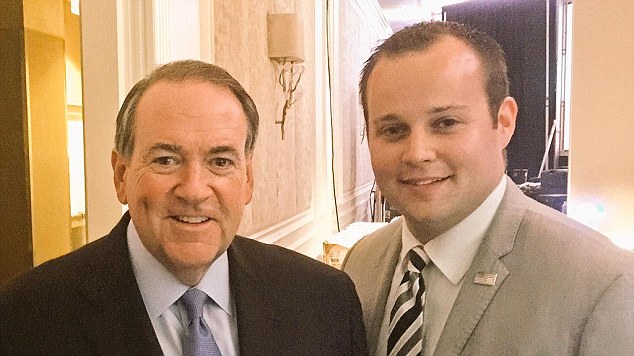 Close link: Josh Duggar, who has been revealed to have molested his sisters, is part of the family which had been one of Mike Huckabee's most prominent supporters

Thank you for getting in touch. I haven't read the article but have heard about it.

I don't have anything to say for the record, but will tell you that the person behind it has been pursuing a vendetta against his former church for years and this story is one of the means he has used.

Having failed there, he has evidently turned his attention elsewhere.

I will also tell you that whatever private difficulties there may have been, the parties involved were reconciled and restored years ago, for which I thank God every day.

Perry had earlier co-authored Huckabee's memoir about his failed 2008 bid for the GOP nomination.

Perry reportedly copped to the abuse and was subsequently excommunicated from his church. His wife also left him, citing 'inappropriate marital conduct' in the divorce proceedings.

Huckabee, a 2016 nominee for the GOP nomination, was already weathering the storm brought on by another child abuse scandal tied to his presidential campaign before Buzzfeed ripped the lid off of court documents implicating his two-time co-author Perry.

An evangelical conservative campaigning to win the votes of Christians nationwide, Huckabee has defended the Duggar family, of 19 Kids and Counting fame after it was revealed that their son Josh, a high-profile conservative activist, had molested several girls in his youth - two of whom were his sisters.

Josh Duggar underwent counseling for his offenses and was never charged in court.

'No one needs to defend Josh’s actions as a teenager,' Huckabee said of his actions on Facebook last month, adding, 'but the fact that he confessed his sins to those he harmed, sought help and has gone forward to live a responsible life as an adult is testament to his authenticity and humility.'

Based on the timeline laid out by Buzzfeed, Perry's misdeeds did not come to legal authorities' attention until 2012, though his church became aware of the alleged abuse sometime between 2008 and 2010. It is unclear exactly when they took place.

Perry told Daily Mail Online: 'I don't have anything to say for the record, but will tell you that the person behind it has been pursuing a vendetta against his former church for years and this story is one of the means he has used.

'Having failed there, he has evidently turned his attention elsewhere.

'I will also tell you that whatever private difficulties there may have been, the parties involved were reconciled and restored years ago, for which I thank God every day.'

His books with Huckabee were released in 2007, Character Is the Issue, and late 2009, Do the Right Thing: Inside the Movement That's Bringing Common Sense Back to America.

Other works Perry takes credit for helping write include The Vow, the true story of Kim and Krickitt Carpenter. Written in 2000, it became a major motion picture starring Rachel McAdams and Channing Tatum in 2012.

His specialty is helping co-write autobiographical memoirs, though, and he's published a handful of non-fiction books under his own name.

In 2010 he co-authored the novel Letters to God, based off the feature film. According to Perry's Amazon page, it debuted at #7 on The New York Times Best Seller List.

'Clients of every age and walk of life have put their trust in him, from governors and college presidents to beauty queens and ordinary people with extraordinary stories of triumph.'

Perry's accuser is not named in the Buzzfeed article. But it states that she began speaking out in 2007, when she was at least 18 or older, according to one of the court documents it obtained.

Catherine Davis, a parishioner at Perry's former church, Covenant Presbyterian Church, said in the court document that the alleged victim told her that she began telling her family members, church leaders, school officials and other people in her life about the abuse that year, though she did not share her story with Davis until the summer of 2012. 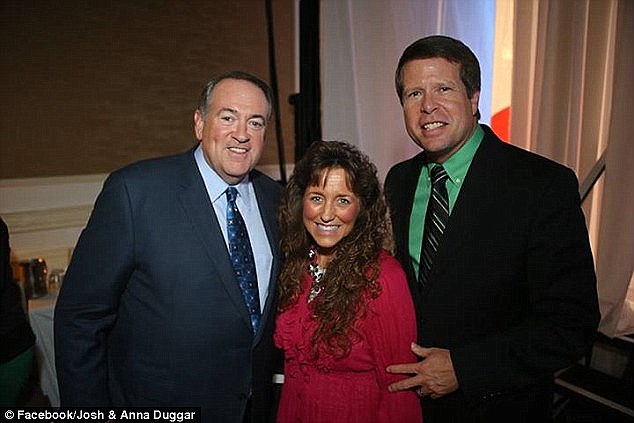 Two molester links and counting: Mike Huckabee with Jim Bob and Michelle Duggar, who had been high-profile supporters of his campaign until their son's incestuous abuse was revealed

Minutes of meetings from Covenant Presbyterian Church  - part of the national Presbyterian church - given to Buzzfeed by a parishioner show that Perry resigned from its deaconate in 2008.

At a separate meeting in 2010, Perry was reportedly excommunicated after 'he confessed to committing heinous and repetitive sin […] and has not shown evidence of repentance'.

Those same minutes were used as evidence in a 2012 lawsuit brought against the church by Mrs. Davis and her husband Austin Davis, who are no longer parishioners there.

The Nashville Police department told Buzzfeed, 'The alleged sexual battery was reported to have occurred when the victim was between the ages of 11 and 14.'

As a result of its 2012 investigation, 'the allegations of sexual battery were sustained, but it was determined that the statute of limitations had tolled, barring prosecution,' spokesman Don Aaron told Buzzfeed.

'The victim was age 18 when she first disclosed the allegations to non-law enforcement and said at that time she did not want the matter reported to the Tennessee Department of Children’s Services or the police.'

Perry's divorce proceedings are not a matter of public record. But Buzzfeed reports that, according to documents filed, Perry's ex-wife claims he 'admitted sexual abuse' of child.

His response to her claim, based on the documents, was that 'there was never any testimony or other evidence of any kind presented' nor were there 'any orders or findings of fact […] regarding any alleged sexual abuse of any minor child relative to the parties’ divorce or any other legal proceeding.'

Mr Davis, the ex-parishioner, claimed in his lawsuit that the church tried to cover up the scandal and harassed him for trying to bring it to light.

The alleged victim of Perry's unwanted sexual advances reportedly told BuzzFeed that she doesn't share that view of how events unfolded. She believes that the church acted appropriately and does not believe it tried to cover up the abuse.

Buzzfeed states that Perry did not return multiple requests for comment before it published its article and that Huckabee's presidential campaign declined to comment for its story.

The campaign has not provided a comment to Daily Mail Online today.

As a victim of child abuse myself, I have to say I find this website’s obvious agenda at highlighting sexual abuse cases committed by Republicans, Conservatives and Christians, whilst ignoring those committed by Democrats, Liberals and Atheists, highly disgusting. The way this website pretends to care about victims of abuse when in reality it’s only interested if those victims can be exploited in

on the hands of Democrats, Liberals and Atheists when it comes to this stuff – especially after the Epstein revelations – so stop trying to pretend that it’s something only your political enemies engage in.

Incidentally, my abuse came at the hands of one of my extremely “Liberal”, left-wing and atheist parents, who were about as far away from Conservative or Republican as you can get.

order to attack “the enemy” is quite revolting. The only real “enemy” should be rapists and pedophiles. It’s a sick mind that tries to exploit such horrific subjects for political advantage. And last I checked, it wasn’t Republicans, Conservatives or Christians asking for pedophiles to be reclassified as a “protected minority” – that was the Democrats. There’s just as much metaphorical blood on