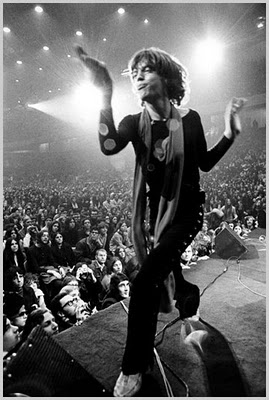 "LONDON (AP) A new BBC radio documentary says Rolling Stones star Mick Jagger dodged an assassination attempt in 1969. The program says Jagger was targeted by the motorcycle group Hells' Angels after vowing not to use the Angels for concert security."
http://www.kxmb.com/News/214707.asp

Note: I reported this incident in The Covert War Against Rock (Feral House, 2000). Actually, there were two attempts to off the Stones:

From Covert War Against Rock: " ... Barger's booze-swaggling, two-wheeling entourage were paid killers. And since the carnage at Altamont, the Hell's Angels have twice attempted to kill the Rolling Stones. In March, 1983, a witness called himself 'Butch,' his true identity protected by the federal witness program, testified before a Senate Judiciary Committee about plots to kill the Stones. 'There's always been a contract on the band,' he admitted under questioning. There were 'two attempts to kill them that I know about. They will some day. They swear they will do it.' The vendetta, Butch said, originated with the killing at the Speedway concert, and was motivated by the failure of the Stones to back the Angel prosecuted for the killing. The first attempt to assassinate the entire band took place in the mid-'70s. 'They sent a member with a gun and a silencer' to a hotel where the Stones were staying. The hit-man 'staked out the hotel, but [the Stones] never showed up,' said the government informant. And in 1979, the Angels' New York chapter 'were going to put a bomb in the house and blow everybody up and kill everybody at the party.' But this conspiracy sank with a cache of plastic explosives, accidentally dropped overboard from a rubber raft. Killing the Stones, he testified, was an 'obsession' with the bike gang.' ... "
http://www.newsmakingnews.com/constantinecovertwaragainstrockl.htm