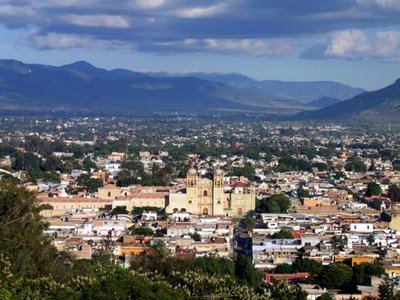 http://ww4report.com/node/2384 By Bill Weinberg 08/25/2006 Mexico’s Defense Secretariat has dispatched troops from the 36th Infantry Battallion, based at the 44th Military Zone headquarters in Minatitlan, Veracruz, to the Oaxaca City, which has been paralyzed by civil protests for weeks. The situation has promped the Popular People’s Assembly of Oaxaca (APPO) to declare a “maximum alert,” fearing that a violent eviction of their protest encampments in the city center is imminent. (APRO, Aug. 23) On Aug. 22, the unrest in the city claimed its second confirmed death, when a group of some 15 armed men in three cars—one with the insignia of the city police department—drove up to one of several radio stations that have been occupied by protesters and sprayed the building with gunfire. One of occupiers, Lorenzo Pablo, a 52-year-old architect, was hit and died. A short time later, masked men fired on the car of freelance photographer Luis Hernandez, who had been at the scene of the earlier shooting death (of Jose Jimenez, Aug. 12). Hernandez was unharmed. (AP, Aug. 24) On Aug. 23, Oaxaca Attorney General Lizbeth Cana said the occupation of radio and TV stations and the blocking of roads in and around Oaxaca City were “acts of destabilization” consistent with an “urban guerrilla” strategy. The remarks prompted federal Attorney General Daniel Cabeza de Vaca to state that there was no evidence of guerilla involvement in the civil struggle in Oaxaca. (El Universal, Aug. 24) A particularly atrocious story in the New York Times Aug. 24 was entitled “Violent Civil Unrest Tightens Hold on a Mexican City.” Yet the story itself noted that the only “violence” attributed to the protesters is the burning of a few buses, while there have now been two confirmed deaths of protesters at the hands of the security forces and unaccountable pro-government gunmen, rumors of three more in the attempted police eviction of the protest encampments June 14, and (by APPO’s count) 35 political killings statewide since the protests began. The story ends with a quote from the president of the hotel owners association complaining about how the protests have devastated the tourism industry—as if this was the most grave problem facing the state. This has been only the second full story the Times has run on the Oaxaca crisis. — Timeline of protest and repression in Oaxaca: May 22: Teachers from Section 22 of the National Union of Education Workers go on strike demanding pay increases, improved working conditions, and increased budget for school meals, uniforms and supplies. June 14: Governor Ulises Ruiz Ortiz of the Institutional Revolutionary Party (PRI) sends over 1,000 state police into the historic town center before dawn to break up the teachers’ protest camps using tear gas and beating protesters with clubs. The teachers regroup and take back over the town center only hours later. June 16-July 25: Tens of thousands of citizens from Oaxaca City and across the state join the teachers protest camps and massive marches, demanding the ouster of Ulises Ruiz. The protesters form the “Popular Assembly of the Peoples of Oaxaca” (APPO in Spanish). July 26: The APPO initiates a series of direct actions meant to paralyze the state government and force Ulises Ruiz’s resignation, setting up protest camps outside of all state government buildings. August 1: Three thousand women from the APPO march through town and then take over the state television and radio station, CORTV. August 7-22: Civilian clad state and federal police and unidentified gunmen begin to shoot at protest marches and encampments and arrest APPO leaders on the street. On August 21 the gunmen destroy the CORTV transmitter; the following morning the APPO took over 12 local commercial radio stations (later in the week they release ten stations). That night, on August 22, the gunmen kill two protesters and wound several more. Images of gunmen in police trucks driving through Oaxaca City air on national and international television (Televisa and Reuters) on August 22. The APPO organizes over 1,000 barricades throughout the city to halt further incursions of gunmen or police. August 29-September 20: Members of the APPO travel to Mexico City for talks with the Minister of the Interior, Carlos Abascal. The Interior makes several offers to address education and social equity issues in Oaxaca, but the APPO turns down all offers, maintaining their singular demand that Ulises Ruiz resign or be removed from office. Talks stall on September 20. September 21: The teachers union and the APPO initiate a march of over 4000 people to Mexico City where they will set up a protest camp outside of Congress. The teachers and APPO protesters will walk over 300 miles through four states before arriving in Mexico City in early October. September 24: APPO protesters clash with gunmen after storming a hotel where Ulises Ruiz was rumored to be conducting an interview. Gunmen shoot one protester in the arm. September 25: Fox meets with eleven governors from the Institutional Revolutionary Party to discuss the conflict in Oaxaca. President Vicente Fox’s spokesperson, Ruben Aguilar, says that Fox will solve the problem in Oaxaca before November 30, the last day of his six-year term. Ulises Ruiz attempts to open schools, demand that teachers return to classes, and threatens to fire all those who do not return and hire substitutes. His attempt fails. September 26: The Minister of the Interior, Carlos Abascal, submits a draft proposal for the use of federal police in Oaxaca. President Fox will decide whether to authorize the use of force. http://us.oneworld.net/article/view/140115/1/

Previous Article
The Mark Foley Coverup Timeline
Next Article
Who is Anne Armstrong?

Who is Anne Armstrong?
Oct 07