Abdelbaset al Megrahi was a patsy and his terminal condition a cover story justifying his release from prison - as a condition of a secret oil deal with Qadaffi. This is the latest chapter of a scandal that has the entire UK bufuddled, though the truth has been screaming between the lines all along. - AC 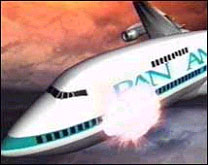 THE Lockerbie bomber has secretly banned Scots from being told about his medical condition.

Abdelbaset al Megrahi was released from prison seven months ago on compassionate grounds after being given only three months to live. But just two weeks ago, the son of Libyan leader Colonel Gaddafi boasted cancer-stricken Megrahi's health has "greatly improved" now he is home.

As part of the conditions of his release, Megrahi has to provide East Renfrewshire Council with a monthly report on his medical condition. But his lawyers have gagged the council from releasing the reports used to update the Scottish government.

Opposition politicians have been calling for evidence on the condition of his health.

They insist the public has a right to know what is going on.

Labour MSP George Foulkes has called for the reports to be released under the Freedom of Information Act. But his request has been rejected after council chiefs consulted Megrahi's lawyers.

East Renfrewshire Council monitor Megrahi because his family lived in Newton Mearns during his time in jail.

Foulkes said: "If the medical evidence backed up the decision to release Megrahi, then there should be no reason why it can't be published.

"The lawyers' refusal and the government's refusal can only mean that they both have something to hide. It is a matter of public importance."

His concern was echoed by some families of Lockerbie victims.

Kathleen Flynn, from New Jersey, whose 21-year-old son John Patrick was killed in the bombing, said last night: "I'm not the least bit surprised by this decision.

"But the bigger issue is why Megrahi was ever released on compassionate grounds in the first place."

In a letter to George Foulkes, East Renfrewshire Council solicitor Anne Leonard said: "I have been advised that Mr Megrahi does not consent to the release of his personal data."

A council spokesman said: "Their release would breach the Data Protection Act."

Megrahi, a former Libyan intelligence agent, was sentenced to life imprisonment in 2001 for blowing up Pan Am Flight 103 over Lockerbie on December 21,1988.

Justice Secretary Kenny MacAskill freed Megrahi seven months ago on compassionate grounds after he was told that the Libyan was dying from prostate cancer.

Doctors told MacAskill the bomber could have fewer than three months to live.

Megrahi was allowed home to Libya on August 20 and received a hero's welcome on jetting into Tripoli.

Under the terms of his release, he was to take part in a video link with council officials.

But they have had to contact him by phone because he was considered too ill to take part in video links.