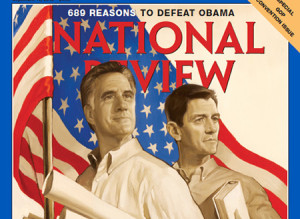 … Earlier this month, the conservative National Review’s Kevin Williamson drove a steamroller over [Gpdwin’s Law]. Williamson’s article, “Bernie’s Strange Brew of Nationalism and Socialism,” which was published two weeks ago but became available on the conservative magazine’s website on Monday, is not a model of clarity. It bounces between criticism of Democratic presidential candidate and Vermont Sen. Bernie Sanders’ trade policies and quotes from some of Sanders’ least thoughtful supporters. Yet, as the title of the article suggests, Williamson does come to a bold conclusion — Bernie Sanders is a literal Nazi who is leading a literal Nazi movement in the United States.

Williamson lays this thesis out in one paragraph:

In the Bernieverse, there’s a whole lot of nationalism mixed up in the socialism. He is, in fact, leading a national-socialist movement, which is a queasy and uncomfortable thing to write about a man who is the son of Jewish immigrants from Poland and whose family was murdered in the Holocaust. But there is no other way to characterize his views and his politics. The incessant reliance on xenophobic (and largely untrue) tropes holding that the current economic woes of the United States are the result of scheming foreigners, especially the wicked Chinese, “stealing our jobs” and victimizing his class allies is nothing more than an updated version of Kaiser Wilhelm II’s “yellow peril” rhetoric, and though the kaiser had a more poetical imagination — he said he had a vision of the Buddha riding a dragon across Europe, laying waste to all — Bernie’s take is substantially similar. He describes the normalization of trade relations with China as “catastrophic” — Sanders and Jesse Helms both voted against the Clinton-backed China-trade legislation — and heaps scorn on every other trade-liberalization pact. That economic interactions with foreigners are inherently hurtful and exploitative is central to his view of how the world works.

There are a number of oddities that can be noted in this paragraph. Kaiser Wilhelm II, for example,abdicated the throne in 1918 — one year before Adolf Hitler joined the Nazi Party and seven years  before the publication of Mein Kampf. So it is not at all clear why Williamson brings up the World War I-era leader in a paragraph arguing that Sanders embraces the poisonous ideology that drove much of World War II.

The crux of Williamson’s paragraph laying out his Sanders-is-a-modern-day-Hitler theory, however, appears to be that Sanders’ opposition to open trade relations with China marks him as an adherent to the philosophy of government that murdered six million Jews and millions of others that the Nazi regime deemed undesirable. Williamson leads up to this point by noting that many of Sanders’s supporters describe the senator (as Sanders also describes himself) as a socialist. And Sanders, Williamson claims, is also a nationalist. Therefore, in Williamson’s calculation, Sanders is a “national-socialist.”

The official name of the German Nazi Party, of course, was the Nationalsozialistische Deutsche Arbeiterpartei, which translates to the National Socialist German Workers’ Party. So the comparison between Sanders’ governing philosophy and Nazism makes perfect sense if one limits their inquiry to the kind of linguistic arithmetic that drives Williamson’s conclusion. It is a harder comparison to make, however, once one understands that Sanders does not believe that the United States should pursue a militarized policy of Lebensraum while simultaneously seeking to exterminate particular racial and religious minorities.