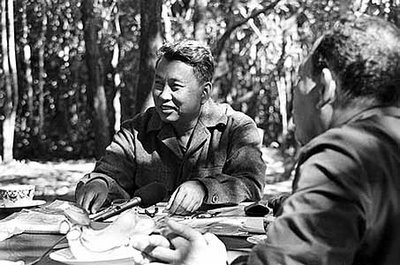 PHNOM PENH (Reuters) – Pol Pot’s chief torturer told Cambodia’s “Killing Fields” tribunal on Monday that U.S. policies in Indochina in the 1970s contributed to the rise of the Khmer Rouge.

Duch, the first of five Pol Pot cadres to face trial for the 1975-79 reign of terror in which 1.7 million Cambodians died, said the Khmer Rouge would have faded if the U.S. had not got involved in Cambodia.

“Mr Richard Nixon and Kissinger allowed the Khmer Rouge to grasp golden opportunities,” the 66-year-old former jailer said at the start of the second week of his trial by the joint U.N.-Cambodian tribunal.

Duch, whose real name is Kaing Guek Eav, was chief of the notorious S-21 prison where more than 14,000 enemies of the revolution were tortured and killed.

Last week, he apologized and begged forgiveness for his crimes. Duch faces life in prison if convicted on charges of crimes against humanity, war crimes, torture and homicide. When asked by a judge to explain how he joined the Khmer Rouge, Duch gave a long, rambling answer that included references to former U.S. President Richard Nixon and ex-Secretary of State Henry Kissinger.

Cambodia became a Cold War battlefield in 1969 when the Nixon administration began bombing routes in the east of the country that Soviet-backed North Vietnamese troops were using to transport men and supplies for their war against the U.S.-backed regime in Saigon.

In 1970, then Prince Norodom Sihanouk was ousted in a coup led by U.S.-backed General Lon Nol, who cranked up the war against Vietnamese and Cambodian communists.

Sihanouk later formed an alliance with the Khmer Rouge and he urged Cambodians to join the fight against Lon Nol’s regime, which fell to Pol Pot’s army in 1975.

“Prince Sihanouk called on the Cambodian people to go and join the communist Khmer Rouge in the jungle and that allowed the Khmer Rouge to build up their troops from 1970 to 1975,” he said.

Without these events, Duch said: “I think the Khmer Rouge would have been demolished.”

The tribunal, set up to prosecute those deemed most responsible for Khmer Rouge atrocities, can only pursue individuals for crimes committed in Cambodia between April 17, 1975 and January 6, 1979, when the regime fell to invading Vietnamese troops.

After Pol Pot’s death in 1998, Kissinger defended the decision to bomb Cambodia as part of the Vietnam War and said it could not be linked with Pol Pot’s killings later on.

Previous Article
XE (Formerly Blackwater) in Somalia/‘Pirates’ Strike a U.S. Ship Owned by a Pentagon Contractor … but Is the Media Telling the Whole Story?
Next Article
Birth of an Urban Legend (from Michelle Malkin): ACORN Infiltrating Tea Parties????

35 Countries Where the U.S. has Supported Fascists, Drug Lords and Terrorists
Mar 20

35 Countries Where the U.S. has Supported Fascists, Drug Lords and Terrorists