The Kansas City Killer and His Mentor: A Tale of Two Nazis 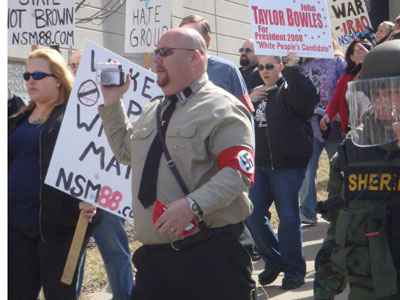 OCALA, Fla., April 17, 2014 — Ever since a gunman claimed the lives of three people at a Kansas City-area Jewish center last Sunday, the question has been repeatedly asked, “Why?” The answer seems simple enough: The assailant is an anti-Semite among anti-Semites. The man hates Jews with a virulent passion that he’s never concealed.

The shooter, who is 73-years-old, made a home for himself at Vanguard News Network under the screen-name “Rounder.” Most people have never heard of VNN. It is a discussion forum for neo-Nazis, one of the most rabid such forums on the internet. The ringleader is Alex Linder, one of America’s most active neo-Nazi agitators. Despite being almost three decades Miller’s junior, he has built an extensive resumé as an anti-Semitic rhetorician.

VNN’s influence on Rounder would be hard to overestimate. He logged over 12,000 posts in its various discussion rooms.

League of the South activist Hunter Wallace posted a VNN screen capture on his blog. It revealed that Rounder voted in support of Linder’s aim “to attack Christianity and … advocate exterminating all Jews.”

In a separate posts, Wallace, a strong opponent of white nationalism and neo-Nazism, noted that “Vanguardists” and “Vantards” often commit acts of extreme violence. He also wrote of their movement’s dead-end nature.

Patheos contributor Dr. Warren Throckmorton, a psychology professor and counselor at Grove City College, revealed more of Miller’s VNN activities. Throckmorton published a screen capture of a December 2012 forum message from Rounder, who wrote that “(t)he word ‘advocate’ has always seemed a bit ambiguous” so he would “clarify [his] position to protect” himself. The clarification revealed his “desire to press a button that’d make all kikes disappear from the earth” as well as “cheer and do cartwheels when Islamic victory over the jews comes, and muslim freedom fighters stuff all jews, unceremoniously, into red hot ovens.”

Rounder finished his rant by remarking that “(o)nly a fool or JOG” — likely an abbreviation of “Jewish Occupied Government” — “agent would encourage anyone on the internet to kill another person, even kike parasites. And I’ve never heard or read where Alex made any such encouragement.”

Linder claimed that, “the solution to the problem is ultimately to exterminate them … their behavior over 2000 years has shown that when you kick them out, they always wind up being let back in, basically by the Christians, and they cause the same problems. Well, call me a ‘racist’, ‘evil’, ‘Nazi’, ‘hater’, whatever, I want my kind of people to survive and prosper; people German-descended, blue eyes, good, solid people who built, you know, nice towns … I want them to prosper. I don’t want the Jews to prosper. They’re attacking me. I’m fighting back.”

Linder was not being facetious or hypothetical; his statements in a 2012 interview with hard-right Jim Giles of Radio Free Mississippi leave no wiggle room.

Linder first said that the Holocaust is “a big lie and … you don’t have to be an expert or even dig into it that far to see that it’s a big lie.” A few minutes later, he said “my view is that we’ve kicked [Jews] out of our countries 110 times, they continue to cause exactly the same problems … They intend our genocide, if I had the power, you better damn well believe I would exterminate all of them, and if you think I would joke about something like that, that would … make me a pretty silly person, I think. So, it’s not rhetorical at all”.

The reaction from Giles was intensely negative. After “Rounder’s” Kansas City rampage — which took only Christian lives — Giles made a statement on Wallace’s blog.

“Alex Linder murdered Reat Griffin Underwood, William Corporon and Terri LeManno,” he wrote. “The blood of the little boy, the grandfather and the mother is on Alex Linder and the ‘White Nationalist Movement,’ an anonymous group of Internet cowards and now accomplices to murder. If Linder doesn’t kill himself it’s a good sign he is in point of fact a police informant.”

In a Monday blog entry, Wallace theorized that Rounder’s “hero Alex Linder has consistently advocated his ‘principled solution’ of exterminating the Jews for 10 years now, so Glenn assumed that by acting to exterminate the Jews he would win the admiration of his peers at VNN Forum.”

Despite all of this evidence, many media figures chose to blame a completely unrelated figure for Rounder’s madness.

The patsy is progressive journalist and bestselling author Max Blumenthal. He entered the spotlight because it was alleged that Rounder wrote favorably about Blumenthal’s Israel skepticism over 300 times. A Mondoweiss investigation revealed this to be untrue.

“Out of 12,683 forum posts attributed to [Rounder], one single post was found to have mentioned ‘Jew journalist Max Blumenthal.’ That single post contains a broken link to a page that once linked to a YouTube clip of a brief interview with Blumenthal,” reporters Alex Kane and Phan Nguyen stated. “In that interview, Blumenthal explained how neoconservative supporters of Netanyahu in D.C. were hoping to sway the 2012 presidential election in their favor.”

Why Linder has not received more press attention is a mystery. We can be certain, though, that even in the face of sheer savagery, some will try to score political points.

The Kansas City tragedy is a morbid reminder of anti-Semitism’s potency, even in twenty-first century America. Beyond this, though, few if any have recognized that it is also a gruesome example of how online chatter can lead to real-world carnage.

Let’s hope that the national mainstream will come to realize that the keyboard warriors of today may move past their computers tomorrow. While such a thing cannot be prevented in all cases, surely solutions can be found to stop an untold number from destroying the lives of others, along with their own.

A country of genuine social consciousness — where celebrity fundraisers don’t determine who lends a helping hand — would have been working on something to this effect long ago.