Interview with David Zirin, Author of “Game Over: How Politics has Turned the Sports World Upside Down” 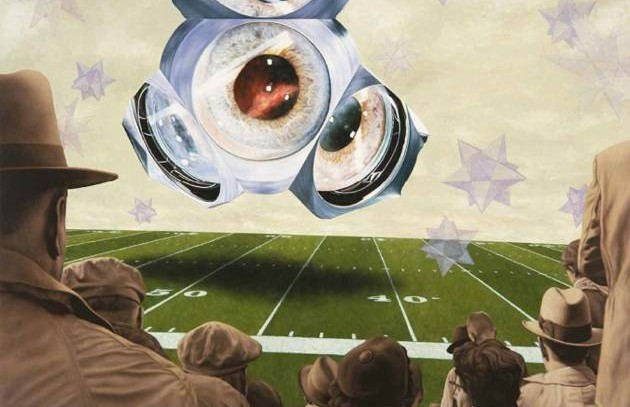 For long excerpts from “Game Over” at Google Books: click here.

The NFL is an emperor with no clothes, no morals, and vaults of gold. Author Dave Zirin explains how greed and corruption have ruined the game, endangered players, and fleeced the public.

Sportswriter Dave Zirin has a new book out, Game Over: How Politics Has Turned the Sports World Upside Down. A proud lefty with the attendant bona fides—he writes a column for the Nation, and one of his previous books borrowed its title from a Public Enemy song—Zirin is bold, smart, and occasionally angry.

The new book deals with stuff we don’t tend to think about as we’re settling in for a one o’clock kickoff on Sunday afternoon—the problematic relationship between team owners and lawmakers, the hypocrisies of the NCAA, the unlikely influence of the Occupy movement on a handful of outspoken athletes. Zirin has also spent lots of time thinking and writing about the culture of pro football.

Kevin Canfield: The biggest concern in football today centers on the health of the players. This month we found out that Junior Seau, the great linebacker who played in a Super Bowl just five years ago, had a degenerative brain disease before he killed himself last May. This is one of many tragic stories about players who’ve suffered from the aftereffects of hits they took on the field. You’ve got ex-players suing the NFL for head injuries they suffered, saying they wouldn’t let their sons play football. What does this mean for the future of the sport?

David Zirin: I think it means a future of protracted crisis for the sport. There was a time in this country when boxing was the most popular sport in the United States. Where I live, in Prince George’s County, Md., there were once several dozen boxing gyms. Now there’s one. The main reason for that is seeing people like Muhammad Ali slowly degenerate. It pushed parents to keep kids away from the sport. I think you’re going to see a similar push in football. It would not surprise me if, 20 years from now, playing tackle football will be illegal for people under the age of 14—that it will be viewed as an actual health hazard.

KC: We’ve seen the NFL take this on from a PR standpoint. There’s that commercial about making the sport safer through better equipment. But what has the league actually done?

DZ: Here’s the problem: You could probably make tackle football safer, but you can’t make it safe. There’s no such thing as playing tackle football without head injury. You’re not going to ban the sport—these are adults, with informed consent, who get paid a lot of money—so what can be done to make it as safe as possible? Here’s where I think [NFL Commissioner] Roger Goodell has flubbed the test of his moment, tremendously. He hasn’t done anything that would hit the owners in their pocketbooks—and that’s how you’d know he’s actually serious. All he’s done is hit the players in their pocketbooks, having larger and larger fines for the big-time hits. When in reality what the research shows us is that the head injuries, like the one that eventually took the life of Junior Seau and others, come from repetitive, daily, what are called sub-concussive hits of playing in the NFL.

KC: What could Goodell do? Doesn’t he work for the owners?

DZ: Yes. This is not a neutral position as commissioner, but there are things that he could do if he really was concerned. One: Stop pushing for an 18-game season (which would add two games to each team’s schedule). It’s ridiculous. Two: Make sure there are independent medical practitioners on the sideline at games. Not team doctors—independent concussion experts, independent physicians. Because right now what you have on the sideline are people with gross conflicts of interest, as team employees. Three: Make sure that the field, the working conditions are safe for players. Some of these playoff fields have been an absolute disgrace. Yet because [Goodell] represents ownership, and because [repairs] would cost money from the ranks of ownership, those are not the things he pushes for.

KC: Some of this stuff would apply when you’re talking about Robert Griffin III, the Redskins quarterback who was hurt recently. He had a great rookie season, but he took the field in a playoff game with a bad knee. During the game he reinjured it to the point that he needed reconstructive surgery. He’s now facing questions about his future as a player. The postgame debate over whether or not his coach, Mike Shanahan, should’ve sat him down became a huge crossover story. I mean, you had Maureen Dowd writing about it. What happened here? Did the team exploit a gung-ho 22-year-old athlete?

“These guys did not get where they are by asking for help. It becomes anathema to them to say, I need a private security guard.”

DZ: Oh yeah, the team did not look out for this athlete’s best interests. If you want to look at it like a mystery—“Who Murdered Robert Griffin’s Knee?”—there are numerous accomplices. Dan Snyder, the owner of the team—it’s the third-most valuable team in the NFL, it’s worth $1.6 billion. For a pittance, he could’ve made sure that that field was in proper playing shape. It had been a problem all year. The second culprit, you have to say, is Coach Mike Shanahan and the medical staff of that team, for not actually protecting this young man from himself, from his own 22-year-old desire to be part of some future NFL Films package and live out this fantasy of coming back injured and being the big hero.

KC: In December, USA Today ran a story that said three out of four NFL players own guns. There was that awful incident midway through the season when Jovan Belcher, who played in Kansas City, murdered his girlfriend and then killed himself. Terrell Suggs, who plays for the Baltimore Ravens, had to hand his AK-47 and several other guns over to the police after he was accused of some bad stuff by his girlfriend. Why is gun ownership so prevalent among players?

DZ: There’s a sort of conventional wisdom reason that’s given that I like to push back against, where the media often talks about it as if it’s a question of machismo—that players want to have guns because the NFL is such a macho culture. Having talked to a lot of players, it less comes from a point of a machismo and more from a point of fear. There is a lot of fear and paranoia that accompanies being a professional athlete, a lot of fear that comes with the idea of people targeting you or targeting your home. Players are very aware of other players who’ve been robbed either in public or in home invasions. Players are very aware of Sean Taylor, who was shot and killed in his home and did not have a gun.

In Game Over, Zirin foresees—or at least pines for—an era in which billionaires from the corporate world are forced to relinquish their ownership of pro sports teams. New York Mets fans, for instance, have a right to seek “community ownership of the entire team,” Zirin writes. “Not just because their trust was so flagrantly violated, their blue and orange entangled in a Ponzi scheme”—team owners Fred Wilpon and Saul Katz invested many millions of dollars with Bernard Madoff, and paid more than $160 million to settle a lawsuit brought against them by a trustee representing those who lost money to Madoff—”but because New York taxpayers paid for $200 million of the $600 million it took to build Citi Field.”

Could fans actually engineer an ownership coup d’etat? It seems unlikely in this case. Wilpon has said many times that the team is not for sale, and two years ago Major League Baseball, taking the extra step to prevent an ownership shakeup, loaned the team $25 million. Even so, it’s worth a shot, says Zirin, sounding a populist note: “People should rally, fans should hold up signs, politicians should be questioned, and we should cast off our passivity and realize that, as fans, our teams—and our cities—hang in the balance.”

I would say to those players, if you have the money, hire actual security, as opposed to having a gun in the home. Statistics show that if you have a gun in the home, something like the Jovan Belcher situation is far more likely to happen, where a loved one shoots another loved one, than somebody coming in and you stop a burglary. The odds are terrible. But at the same time—and this really gets to the culture of football—these guys did not get where they are by asking for help, particularly on a physical level. It becomes anathema to them to say, I need a private security guard.

DZ: One of the reasons is that while these stadiums don’t benefit the masses of people, they do benefit team owners, and they tend to benefit politicians whom people in team ownership donate money to. It’s not uncommon for the same politicians who facilitate the public funding of these stadiums to then get a box at the stadium, which can be used for all kinds of fundraising and things of that nature. It’s really twisted. In the ‘90s, there was overwhelming support for these stadiums, so you would have referendums and whatnot. But that’s dried up, and so they don’t go the referendum route anymore, they go directly to getting the political votes to do it.

KC: And people are forced to pay taxes for a new arena where, as you say in the book, they can’t afford to see more than a handful of games.

DZ: And that’s just such a huge switch from, say, when my father was growing up, when kids would collect milk bottles and trade them in and get enough money to go see a baseball game. It was actually working-class leisure, with a working class that had a degree of a social safety net, standard of living, etc. We’re at a very different point right now where instead what you’re talking about is prices that are prohibitive for working-class fans, and they can only really get in if they get jobs at the stadium, which tend to be low-paying, no-benefits jobs.

KC: You don’t write typical game stories1, so I don’t know if you’re actually attending the Super Bowl. Will you be there?

DZ: I got a couple small kids, so I never over-commit. If the Ravens get there, I’ll be mighty tempted. [This interview was done before the Ravens beat the New England Patriots, advancing to the Super Bowl—ed.]

DZ: DC-Baltimore. My wife’s whole family is from Baltimore. The game last week [against the Denver Broncos], I’ve got to say it was one of those moments when you’re reminded why you’re a sports fan. I was there with my wife’s family, they’re diehard Ravens fans, and the Ravens had that miracle comeback against the Broncos in Denver. People were having so much fun, people were so happy about it. I mean, it was great.