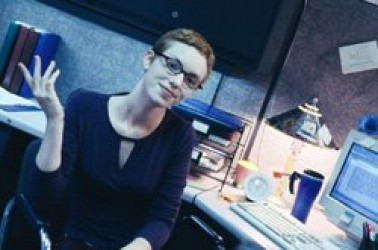 Identity theft for the purpose of character assassination is one way to deal with a gnat-like political whistle-blower like myself – and here it is, someone using “my” home page to impugn my research:

The fraudulent domain name was registered by proxy (a system that falsely promises anonymity: DBP is not all that private, actually, and “proxy” registration leaks like a sieve) on Aug. 22, 2008. It was created at ns25.domaincontrol.com, and this is a server with a central relay in Scottsdale, AZ.

The question is, who is “JQ Public?” The marginal-appearing person of questionable gender in the photo? Is this Clark Rockefeller’s twin sister? At “my” home page we find: “Alex Constantine has written a book called The Psychic Dictatorship, filled with lies and fantasy.”

The title is wrong. About what you would expect from one of the sick political pedophiles, neo-nazis, etc., that I write about. It’s a hoax, identity theft. And it gets bizarre …

“JQ Public” claims to be a famous author: “Her first novel,” we’re told at the bio link to “my” home page, “received wide acclaim and earned J.Q. several prestigious awards.” “J.Q. Public” has posted blurbs from newspapers praising her imaginary “novels” very highly. Problem is, the author wrote them, not real critics.

On the Net, I found cachés of deleted material in which she exclaimed: “J.Q. Public will be famous one day.” To prepare, “J.Q. Public” has apparently written glowing reviews of the “author’s” fake books … in advance of fame … anti-depressants, anyone? …

Supposedly, “JQ Public” wrote a book called Eye of the Hurricane. I did find a book with this title, but “JQ Public” didn’t write it:

“JQ Public” – at aconstantineblacklist.com – has a link to a calendar of personal appearances around the country: Little Book Shop, 555 S. Main St, “Anytown, TX”, one in “Anytown, ME”, and another in “Anytown, GA”.

“My” site is a vicious hoax, that is. One that defames me. I had nothing to do with it.

Identity theft combined with defamation is a serious offense. As it happens, I investigate serious offenses, and I’m pretty good at it – my “victims” say all sorts of vile things about me for that reason. I’m looking for a cannon ballasted with venom and multiple pathologies – also a grudge, apparently, against myself. (Last month, it was Robert “Bobby Wad” Wadman, the accused pedophile who filed a nuisance suit claiming that he couldn’t hold a job at the Justice Department due to my article on his checkered past and ties to the Reagan/Bush bund. Now it’s this loon … )

Who was Laurance Spelman Rockefeller?
Nov 16