Adolf Hitler took a primitive form of Viagra for his encounters with Eva Braun, claim the authors of a book about the dictator's fragile health. The testosterone extract was one of 82 different medications that Hitler used during the course of his 12-year reign.

The Führer was so sickly and so fearful about his health that at one stage he was taking 28 assorted drugs and remedies each day. 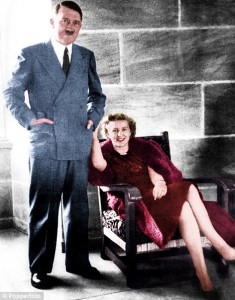 Potions: Hitler with Eva Braun. A new book claims the Führer took a testosterone extract for encounters with his lover

The authors of Was Hitler Ill? have looked at long-neglected medical archives and formerly classified military documents to try to answer the question of whether Hitler's poor health was in some way responsible for his monstrous actions.

They have also tried to assess whether his personal doctor Theodor Morrell was trying to slowly kill him.

One of their major sources are the papers of Dr Morrell, whom Hitler came to rely upon with increasing desperation, even though he was regarded as a quack by many of the Nazi elite and used unconventional and holistic treatments. His records show that he began giving Hitler testosterone injections and a cocktail made from the semen and prostate glands of young bulls in 1944.

The Nazi leader, then 55, believed this would give him the necessary energy for his encounters with Miss Braun, 32.

The concoction was one of many injections he was given because he had a fear of pills. Other findings show that he had a disproportionate fear of cancer, suffered high blood pressure, cramps, headaches and had polyps removed from his vocal chords several times - perhaps the result of too much shouting at his generals.

But the authors do not believe Dr Morrell was a poisoner. They analysed the composition of the anti-wind drug and ruled out the possibility of the 'Reich syringe master' trying to kill Hitler.

Dr Morrell was given this mocking name by Hermann Goering, the Luftwaffe chief who was for a long time Hitler's likely successor.

Perhaps understandably, Dr Morrell agreed to every treatment the Fuhrer demanded. He gave Hitler small doses of Pervitin, a form of speed. He gave him glucose, intravenous injections of methamphetamine, barbiturates and opiates.

The academics believe their research has debunked several myths. They found no evidence to support the popular British wartime song that the Führer had only one testicle, or a lesser-known fable that his penis was deformed after he was bitten by a goat as a youth. The authors conclude that Hitler, in the end, was suffering from Parkinson's disease but add: 'At no time did Hitler suffer from pathological delusions. He was always aware of his actions. He was fully responsible.'

The authors also found no evidence that Hitler had syphillis, which he railed against for 14 pages in his autobiography Mein Kampf as being a 'Jewish disease'. He had eczema and suffered from insomnia. The failed 1944 bomb plot left him with perforated eardrums. His flatulence was the source of much mirth among the high-born Prussian generals who often doused their handkerchiefs in cologne and held them to their noses during conferences in cramped bunkers.