From the Holocaust to Thalidomide: A Nazi Legacy 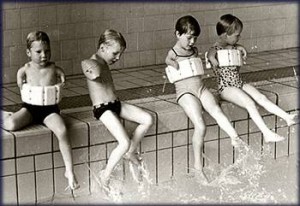 ” … “One of the most chilling aspects of this sordid tale is the assertion that ‘in the immediate postwar years, a rogues’ gallery of wanted and convicted Nazis, mass murderers who had practiced their science in notorious death camps, ended up working at Grünenthal, some of them directly involved in the development of thalidomide.’ … ”

I was attending World Federation of Jewish Child Survivors of the Holocaust and Descendants 24th Annual International Conference in Cleveland last week, when my aunt, herself a survivor, handed me a copy of Newsweek with a cover article, “The Nazis and Thalidomide: The Worst Drug Scandal of All Time.” The story was prompted by the drug developer, Germany’s Grünenthal, unexpectedly issuing an apology to the victims of its teratogenic drug—babies who sustained life-long wounds inflicted by their drug more than 50 years earlier.

I’ve written some about thalidomide previously, in my initial Clinical Trials for Beginners posts, (here and here). For those unfamiliar with the tale, Thalidomide was first released in 1957, with over-the-counter availability in Germany, to treat morning sickness. There were reassurances from the manufacturer that the drug was totally safe, even during pregnancy. It took several years of widespread use before the link was clearly made between thalidomide’s use in early pregnancy and the cluster of children who were subsequently born with small seal-like flippers instead of limbs (phocomelia). Thalidomide was then removed from the market. This tragic effects of thalidomide on developing embryos marks one of the most notorious failures in the history of drug development.

In a controversial move, the FDA approved thalidomide’s use in multiple myeloma in 1998. It’s also being used now for treating leprosy. Studies are in process for using thalidomide to treat the chronic cough of interstitial fibrosis, as well. 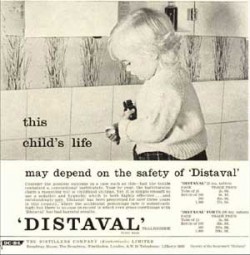 We’ve discussed before that side effects often are not seen until after a drug is marketed. Since only small numbers of patients participate in clinical trials, and some adverse events occur very rarely, side effects like the phocomelia, the small flipper-like limb deformities associated with thalidomide, are not detected until post-marketing.

This brings us back to thalidomide’s resurfacing in the news. In September, Grünenthal, developer of the drug, rather inexplicably issued an apology to the victims of its drug—more than 50 years after the debacle began. Chief executive Harald Stock unveiled a bronze statue of a child born without limbs, stating, “We ask for forgiveness that for nearly 50 years we didn’t find a way of reaching out to you from human being to human being…We ask that you regard our long silence as a sign of the shock that your fate caused in us. We wish that the thalidomide tragedy had never happened.”

I found his apology to the more than 10,000 babies born with serious birth defects—including complete absence of limbs—about as touching as they, their parents and caretakers did. What these victims are asking is financial support to assist in their care and medical needs, something Chemie Grünenthal has resisted. One of the most chilling aspects of this sordid tale is the assertion that “in the immediate postwar years, a rogues’ gallery of wanted and convicted Nazis, mass murderers who had practiced their science in notorious death camps, ended up working at Grünenthal, some of them directly involved in the development of thalidomide.” One of the most reprehensible was Otto Ambros, an inventor of sarin (the nerve gas), who had been convicted of mass murder at the Nuremburg trials but was subsequently freed. After helping the US chemical industry, he went on to become chairman of Grünenthal’s advisory committee when thalidomide was developed. Newsweek’s Roger Williams and Jonathan Stone (no relation) give further horrifying details about links between Grünenthal and other Nazis as well, some of whom experimented on inmates at concentration camps such as Auschwitz and Buchenwald. Another former Nazi, Heinrich Muckter, received huge bonuses for rushing thalidomide to market, despite inadequate testing.

It’s no small irony that the response to the horrors of these “experiments” on innocent people led to development of the research codes of ethics, the Nuremberg Code, Declaration of Helsinki and the Belmont Report, which are the standards for all human research now.

This is my aunt, who survived Auschwitz in her teens. Miraculously, some, though not all, of our family survived. This is a more recent photo of her, from an educational exhibit in Omaha on the Holocaust.

There were several striking things about this Holocaust survivor and descendants’ conference. One was the ongoing pain and scars that still linger and are now cross-generational. Another was the survivors’ remarkable resilience. Yet another was how many have gone on into helping professions, part of their attempt at tikkun olam, or repair of the world. My father followed that path, making artificial limbs and prosthesis—almost certainly for thalidomide babies among them. It was my accompanying him on house calls to patients when I was a child that first stirred my interest in becoming a physician and my special interest in medical ethics and issues of social justice. And the conference’s final message was, “Remember…never forget…There is hope for your future.”

The take home message of the juxtaposition of this moving conference and then reading more about the Nazi connection to thalidomide is that, despite the Nuremberg trials and the development of ethical principles to guide research, we haven’t yet gotten it. It has taken fifty years for a tepid apology for thalidomide to arrive. Worse, there are still ongoing genocides throughout the world, either related to historic ethnic rivalries or, more often, related to money and greed. There are still major ethical abuses in conducting clinical trials. We seem to be confronted almost daily by evidence of our mistakes. What more will it take for us to learn and put people and ethics above power and profits?

Distaval ad: Duckwaill/Flickr
——————————————
About the Author: Judy Stone, MD is an infectious disease specialist, experienced in conducting clinical research. She is the author of Conducting Clinical Research, the essential guide to the topic. She survived 25 years in solo practice in rural Cumberland, Maryland, and is now broadening her horizons. She particularly loves writing about ethical issues, and tilting at windmills in her advocacy for social justice. As part of her overall desire to save the world when she grows up, she has become especially interested in neglected tropical diseases. When not slaving over hot patients, she can be found playing with photography, friends’ dogs, or in her garden. Follow on Twitter @drjudystone or on her website. Follow on Twitter @drjudystone.

Previous Article
Catholic Bishops Deny Role in Argentine Junta
Next Article
The Noble and the Base: Poland and the Holocaust 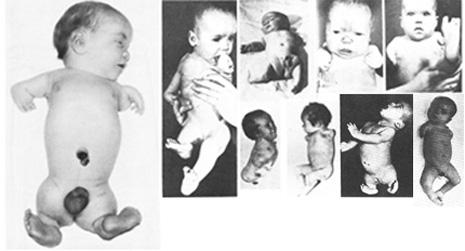 The Noble and the Base: Poland and the Holocaust
Nov 15