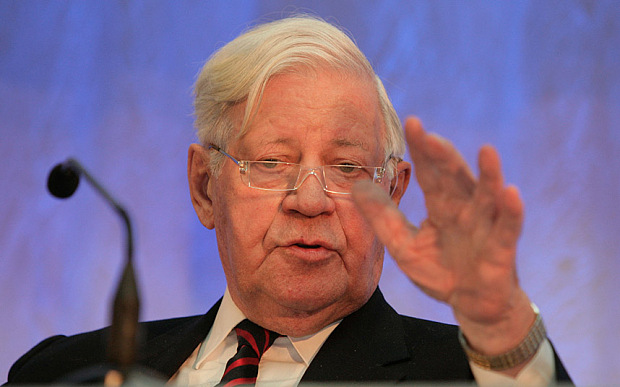 A new book has caused controversy in Germany by accusing one of the country’s best-loved former leaders of a hidden Nazi past.  Former Chancellor Helmut Schmidt, now 95, is the subject of claims he was a zealous supporter of the Nazi party in his youth.

Mr Schmidt, Germany’s oldest surviving former leader, has never sought to hide the fact he served with the Wehrmacht as a conscript during the Second World War, seeing action at the siege of Leningrad before being captured by British forces in 1945.

But in her book, Helmut Schmidt and the Shit War, to be published next week, Sabine Pamperrien alleges that far from being the reluctant conscript he has always claimed, Mr Schmidt was an enthusiastic Nazi.

Her claims appear to be largely based on newly uncovered documents at the Wehrmacht archives in Freiburg, which include evaluations of the young Mr Schmidt by his superior officers.

Helmut Schmidt is credited with many of the financial policies that enabled the “economic miracle” that transformed post-war Germany into the most successful economy in Europe. As chancellor, he steered the country through the horrors of 1977’s “German Autumn”, a series of kidnappings and assassinations by the militant red Army Faction.

Mr Schmidt admitted as long ago as 1979 that “came under the influence” of the Nazis in the early years of Hitler’s rule, but he also says he was quickly disenchanted and became an opponent of the Nazis.

The book has already provoked fierce debate in Germany, with many accusing Ms Pamperrien of muckraking.

“It is academically honest and acceptable to point out alleged gaps in Schmidt’s memories and inaccuracies in his accounts in his own biography,” Hans-Jorg Vehlewald wrote in Bild newspaper.

“But to topple him from some resistance fighter monument he has never laid claim to is cheap and dirty.”