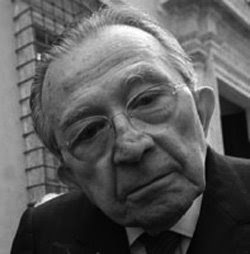 The political scene in Italy is something that confuses even the Italians who live there, so don't be surprised if you're a bit lost at Il Divo.

This is a spectacular film about corruption in high places, specifically as that relates to the political life of Giulio Andreotti, seven times prime minister of Italy and a senator for life.

Andreotti, here portrayed with quiet menace and restraint by Toni Servillo, has been known in his career by many nicknames besides Il Divo, including Beelzebub, the Hunchback and the Sphinx -- the general idea behind all the names being power hungry and secretive, apparently.

Il Divo moves back and forth in time, but it's about Andreotti's recent history in Italy from the 1970s onward. The movie begins with a sort of pastiche of murder, a bloody music video that shows various people dying in inventive ways; these are some of the politicians, mobsters, bankers and journalists whose murders or apparent suicides have been linked to Andreotti's political reign.

Of particular interest is the 1978 kidnapping of Aldo Moro, a politician grabbed and eventually killed -- because Andreotti wouldn't negotiate -- by the Red Brigade. In the course of the film, Moro's death is the single tragedy that seems to bother Andreotti's conscience. (The visuals in Il Divo are so energetic and the music so often wild and unexpected that the violence is quite riveting, weird though that must sound.)

Next up, the film introduces the various movers and shakers who surround Andreotti, who was leader of the country's Christian Democrat party. All his 'boys' have mobster nicknames, not too surprisingly. It's the day he's forming his seventh government.

Il Divo unfolds as a series of surreal, connected moments -- here is Andreotti talking to a diplomat's wife (Fanny Ardant) about loneliness; speaking lovingly to his wife, Livia (Anna Bonaiuto); patiently handing out food and money to loyal supporters who have lined up to pay homage.

And here is Andreotti at the horse races, watching intently, while at the same time we watch Sicilian politician and probable mobster Salvo Lima (Giorgio Colangeli) attempt to sprint away from his assassin.

Mafia trials during the early 1990s also yield a bird's eye view of magistrate Giovanni Falcone's exploding car; later in the movie, Andreotti talks about the 236 deaths that took place under his watch.

Andreotti eventually stands trial for his Mafia ties. Despite all manner of accusations of corruption, murder, bribery and whatnot, he is acquitted over and over again.

Il Divo is fast, frantic and often funny, beautifully photographed and held together with an endlessly provocative soundtrack.

Even if you don't know the details of the chaos that was the Italian political scene during Andreotti's reign, the depiction of political corruption has universal appeal. (Although the bloodshed is perhaps a bit more public in Italy.)

Il Divo, which won the Jury Prize at Cannes in 2008 and then won just about everything at the David di Donatello Awards -- Italy's Oscars -- is in Italian with English subtitles.