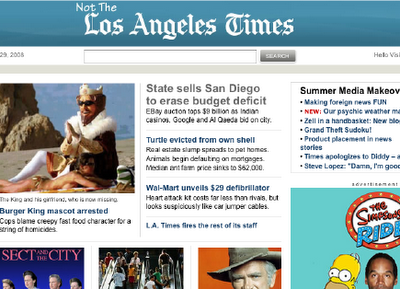 This is Not the Los Angeles Times

The Los Angeles Times has already become a parody of itself, but in case you hadn’t gotten the joke, check out Roy Rivenburg’s new faux-news site, Fake L.A. Times.

The site reports that San Diego has been sold to ease the state budget woes, that the Times has fired the rest of the staff, though Steve Lopez remains amused with his own superior columnizing (he is good) and that Texas’ real-life Big Love Mormons have penned a deal with HBO, tentatively called “Sect and the City” Rivenburg also reports that social conservatives were right: Allowing gays to marry did indeed open the floodgates, and the courts since determined Paris Hilton and a dolphin could wed....