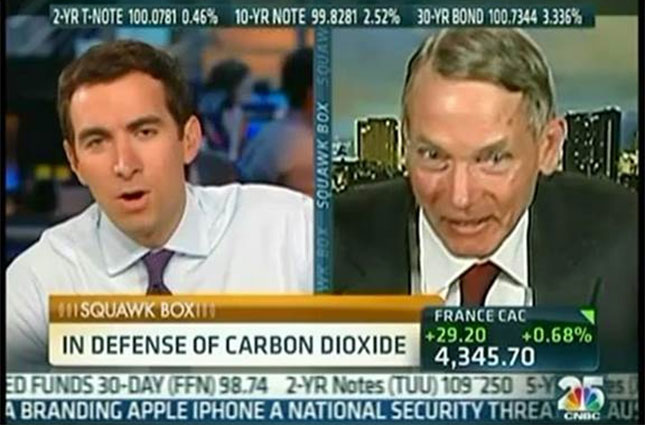 The cable business channel CNBC continued to push climate change denial on its network, hosting a professor who compared the “demonization” of carbon dioxide to the Holocaust.

Physics Professor William Happer has published no peer-reviewed  research on climate change, yet co-hostJoe Kernen introduced him as an “industry expert” on the July 14 edition  of Squawk Box. After a softball interview with Kernen, co-host Andrew Ross Sorkin challenged Happer for “not believ[ing] in climate change” — to which Happer responded by telling Sorkin to “shut up.” Sorkin then asked Happer about comments he made to The Daily Princetonian  in 2009 comparing climate science to Nazi propaganda. Happer doubled down on his comments, stating that “the demonization of carbon dioxide is just like the demonization of the poor Jews under Hitler. Carbon dioxide is actually a benefit to the world, and so were the Jews.”

Sorkin also noted that Happer, who has suggested that people should be “clamoring for more atmospheric carbon dioxide,” is the chairman of the Marshall Institute , which received  $865,000 from ExxonMobil from 1998 to 2011.

While Sorkin’s pushback was admirable, it’s difficult to determine what benefit CNBC is giving its business viewers by once again hosting Happer to push climate denial, especially as it’s becoming clear that unchecked climate change is inherently an economic issue that provides serious risks to businesses. A 2013Media Matters report found that 51 percent of CNBC’s climate change coverage cast doubt on the basic fact that the Earth is warming and that the majority of recent warming is manmade, contrary to a consensus of 97 percent of scientists. The channel recently came under fire  for soliciting a story about “global warming being a hoax.”

CNBC might also be able to find a few scientists who question whether HIV causes AIDS, whether secondhand smoke is dangerous, or whether vaccines cause autism — as all three have a few contrarian “experts”supporting their cause — but it wouldn’t be responsible to give them a platform.