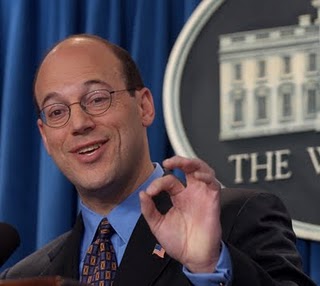 "When people hear [Lisa] Baron worked for Reed ... they ask if it's true that Reed spread the false rumor that Sen. John McCain had fathered a black child. "How would I know?" writes Baron. 'I was too busy giving [George W. Bush's future press secretary] Ari Fleischer [oral sex] in a Greenville hotel room.' ... "

Sarah Palin, Ann Coulter and Monica Crowley may think they're pretty bold. But when it comes to baring the secret ardor of a conservative woman, nobody undresses like Lisa Baron. 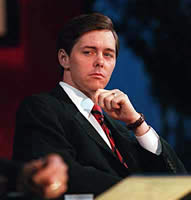 Baron, the former spokeswoman for Christian Coalition head Ralph Reed, is working on a book she calls, My Burning Bush: A Political Memoir of Biblical Proportions.

She admits in her very witty proposal that she made an unlikely advocate for Reed, a man Time called "the Right Hand of God." After all, she confesses, she was "a drinking, swearing, fornicating, socially moderate, fiscally conservative Jew."

Inevitably, when people hear Baron worked for Reed during the 2000 Republican presidential primary in South Carolina (she was Lisa Gimbel then), they ask if it's true that Reed spread the false rumor that Sen. John McCain had fathered a black child.

"How would I know?" writes Baron. "I was too busy giving [George W. Bush's future press secretary] Ari Fleischer [oral sex] in a Greenville hotel room." (Fleischer didn't return calls. But let the record show that this meeting of the mouthpieces would have preceded his 2002 wedding to Rebecca Davis.)

When she met Reed, then a GOP campaign guru, his "movie-star good looks and uncanny ability to articulate conservative thoughts ... made me swoon," she writes. "Ralph's light blue eyes and tanned, turned-up nose made me forget that he was the poster child of political polarization."

Baron does not claim there was any romance between them, but she does believe Reed "felt an instant connection to my bound-for-hell soul. I made him feel young and he made me feel smart."

She also spotted a winner. "Two of my [previous] candidates turned out to be crazy and mean, one was embroiled in a financial scandal and one forgot to tell us about how he had once pulled a gun on a co-worker."

Reed's dealings with now-jailed lobbyist Jack Abramoff helped dash his 2006 bid to become Georgia's lieutenant governor. Baron ended up marrying radio host Jimmy Baron, became a mom and started blogging for Atlanta's alternative Weekly Paper. Some of her postings there - like a frank discussion of her lady parts - definitely won't be read aloud on the "700 Club."

What does Reed think of Baron's book idea (being shopped by Artists and Artisans agent Jamie Brenner)?

"I'm all for supporting aspiring authors," he says. "Lisa did a great job for me. I wish her the best."