Duped by the CIA: Stanley Sheinbaum in Vietnam 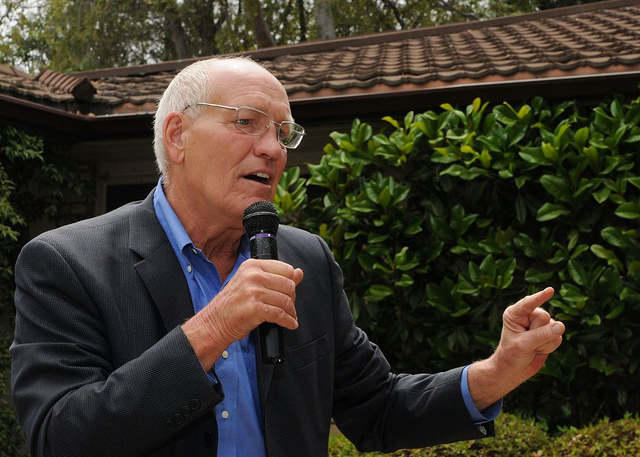 From the Huffington Post: Los Angeles-based Stanley K. Sheinbaum was, in his “younger years,” referred to as the head of the Malibu Mafia, a self-styled group of L.A. Westside liberals active in Democratic politics, which included his wife, Betty Warner Sheinbaum. He was also a key player in the original negotiations with then Palestinian President Yasser Arafat — negotiations that eventually led to the Camp David Agreements. The following is a compilation taken from his recently published memoir, Stanley K. Sheinbaum: A 20th Century Knight’s Quest for Peace, Civil Liberties and Economic Justice. In this compilation, Sheinbaum describes his experiences running the Vietnam Project at Michigan State University:

After I returned from Europe, I applied for teaching jobs and Michigan State University made me an offer I couldn’t refuse, although, like the character in the movie The Godfather, I have often wished later that I had, because half of my job was to be the campus director for Michigan State’s Vietnam Project, a major technical assistance project under contract to the United States Department of State to aid Vietnam in agriculture, general economic development and “police training.”

My responsibilities as head of the on-campus project eventually required that I travel to Saigon. On the day when I was being given a tour of our facility by the head of the Vietnamese end of the project, we passed through two or three classrooms where Americans were tutoring Vietnamese on how to implement the basic structures of Western capitalist economic theory. Then, as we approached the stairwell which led up to the fifth floor of the building, I couldn’t help but notice that we ignored the stairs and instead proceeded on down the hall.

“What’s up there?” I asked, as I pointed toward the fifth floor.

“What are we teaching on that floor?”

He became more evasive. “Uh, I’m not sure exactly.”

“I would have to check with authorities.”

His attitude seemed strange to me. I was getting very annoyed. “Look,” I said, “I’m the Michigan State campus director for this project. Why shouldn’t I be able to go where I want and see what I want?” I headed for the stairway.

“Mr. Sheinbaum, Professor Sheinbaum, you can’t go up there. Please, it’s the policing part of the project. There’s heavy security.” I kept moving up the stairs. “Please, Mr. Sheinbaum, the door will be locked. You can’t get in.”

I reached the door to the fifth floor and grabbed the door handle. My guide was right. It was locked. I knocked on the door. There was no response. I banged harder. After a few moments of my continued banging, a burly figure opened the door but blocked my entrance. He looked at me menacingly. “You can’t come in here,” he growled.

Well, I’m a pretty big guy myself, so I huffed and puffed and threw back my shoulders and said, “You can’t tell me where I can or cannot go. I’m your damn boss, buddy.”

My stance didn’t phase him. “You’re not my damn boss,” he spat. “Now clear out, whoever the hell you are… Now!”

By that point, my guide had caught up with me. “Please, Professor Sheinbaum. Let’s see the rest of the project. You don’t need to be on the fifth floor right now.”

I considered my options, took a deep breath and calmed down. “Okay, okay, but I want an explanation. I need to know what this is all about.”

After that experience, I started asking the sort of questions I probably should have been asking from the beginning. I sought out one of the Vietnamese students I had known fairly well when he studied in East Lansing. I knew he was connected with the police training, so I hoped I would get some straight answers. I asked him why everything on the fifth floor was so secret.

“We have to have good security. There are Communists everywhere.”

“Yes,” he said, “revolutionaries. Communists from the North. And Buddhists here from the South. Our own people. There are enemies everywhere. They want to overthrow the government.”

“Is that a police matter?”

“Your people tell us we must know everything, control everything.”

He seemed perplexed. “The ones on the fifth floor, Professor Sheinbaum.”

It became clear to me after a few more discreet, and not-so-discreet, probing interviews that the “policing” part of the project in Vietnam proper was being run by the CIA, and that they were dealing in counter-insurgency, torture, intimidation of the populace, police undercover infiltration of Buddhist organizations and government control of the media and pro-government propaganda. I was shocked. We were a cover for the United States government to prop up an anti-democratic South Vietnamese regime.

Okay, keeping it real, at that time in my life I honestly might have been able to accept some of that activity “to stop the Communist threat,” but I could not come to terms with the fact that our supposedly college-administered aid project was working secretly with the CIA to create and manage a puppet government under the cover of Michigan State University. This seemed to me to be against the very principles we were supposed to be promoting.

When I got back to East Lansing, I asked for an interview with John Hannah, the president of Michigan State and a legendary figure. Hannah’s office was that of a typically uber-masculine CEO, meant to impress and intimidate: dark paneling, heavy drapery, book-lined walls, large full windows overlooking the leafy campus. It worked. I was impressed and intimidated.

I began by expressing how much I appreciated teaching and working at Michigan State and how much my life had improved since I started working there. Hannah nodded. Then I began an explanation of how I had discovered that the CIA was heavily involved in the Vietnam Project and…

Hannah interrupted. “I thought you said you were pleased to be here in East Lansing and that you enjoy your work here. Did I hear you correctly, Sheinbaum?”

“You know, Mr. Sheinbaum, what you’re telling me is really none of your business.”

“But sir, I’m the campus director for the project.”

“Okay… but is it appropriate for an academic…”

Hannah was losing his patience. “As I said, this is none of your business. You’re here to manage the project on campus. I am told you are doing a good job. I would suggest you continue to do a good job and not ask too many questions about matters that don’t concern you. If you’re bored, Mr. Sheinbaum… by the way, it is ‘mister,’ isn’t it? You still don’t have your doctorate do you? Well then, why don’t you get to work on finishing your dissertation? Then maybe someday you can run a major research institution and make the important decisions. In the meanwhile, if you are not happy here, or your curiosity simply overwhelms you, I am prepared to accept your resignation, Mr. Sheinbaum.”

So that was that. I had to make a decision: continue to run the project, or to stand up for what I was convinced was the absolutely correct moral position and end my academic career just as it was getting off the ground. The United States, through Michigan State University, was clearly propping up a totally corrupt South Vietnamese government headed by an ineffective puppet, Ngo Dinh Diem, whom we had installed to do our bidding. Our entire involvement, both the government’s and the university’s, was going to blow up in our faces at some point and, at a minimum, the project would be disgraced. I decided to resign.

At the time I said nothing publicly, but a few years later, working with the prize-winning investigative journalist Robert Scheer on a long article for Ramparts magazine, he and I did expose Michigan State’s involvement with the CIA in Vietnam, and I explained how that involvement helped to lay the groundwork for an ever greater U.S. commitment to propping up the failed South Vietnamese regime which eventually led to the tragic quagmire which we now know as the Vietnam War.

Meanwhile, I was unemployed.