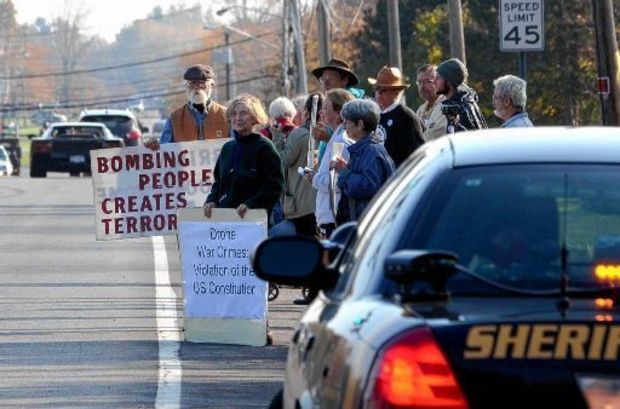 Citizen activists from the east coast to the west coast will be in court this week defending their actions protesting the United States Military and Central Intelligence Agency weaponized drone program.

WHAT: The first trial will begin Monday February 3 in Sacramento, California for four activists arrested at Beale AFB in April 2013, while attempting to deliver a letter to the base commander addressing the illegality of US drones which kill innocent people and noncombatants in Pakistan and other countries.  The letter is a citizen’s declaration charging President Obama and all military personnel involved  in the drone program with crimes against humanity and multiple violations of the law, including due process. (Letter is below.)

Meanwhile, in upstate New York, 17 activists are in the midst of an ongoing trial in a DeWitt, NY courthouse for an October 2012 protest at Hancock AFB protesting the use of the Reaper drones piloted from there that activists say perpetuate war crimes, and violations of human rights laws.

On Friday five activists will be in US District Court in Alexandria, VA appealing their trespass conviction at the Central Intelligence Agency in June, 2013 as they attempted to deliver a letter and seek a meeting with CIA Director John Brennan concerning CIA violations of international law related to illegal targeted drone killing in Pakistan, Yemen, Somalia and elsewhere.

WHY: Activists across the country continue to work to bring an end to the illegal and immoral killer drone strikes which have now killed thousands of people, including hundreds of children, around the globe with no due process.

For the last several years citizen activists have engaged in peaceful protests drawing attention to the violations of international law the US drone program is committing in multiple countries including Pakistan, Yemen, and Somalia.  In protest activities and courtroom testimonies, activists have repeatedly spoken about their obligations under the Nuremberg Principles to oppose the crimes against peace, the violations of international law, and the war crimes the US is committing through its use of weaponized drones.

We, the people, charge the US President, Barack Obama and the full military chain of command, to Beale Air Force Base Colonel Phil Stewart, 9th Reconnaissance Wing Commander, every drone crew and service member at Beale Air Force Base, and every other U.S. base involved directly or indirectly with the U.S. drone program, with crimes against humanity, with violations of part of the Supreme Law of the Land, extrajudicial killings, violation of due process, wars of aggression, violation of national sovereignty, and killing of innocent civilians.

US military and CIA Drone attacks have killed thousands of innocent civilians, including women and children, in the Middle East, Somalia, Pakistan, and Afghanistan.  In the name of combating terrorism against the US, we are terrorizing innocent people and creating many more enemies and potential terrorists in the process.

Our government has become a lawless power, acting as judge, jury, and executioner, just because it can.  The US uses remote-controlled drones to kill women in their kitchens, elders meeting in their jirgas, mourners at funerals, and rescuers who try to help the wounded.  By most independent studies, the vast majority of those killed are civilians.

(2) A halt to all drone surveillance that assaults basic freedoms and inalienable rights and terrorizes domestic life in Pakistan, Afghanistan, Iraq, Yemen, and Somalia

(3) A prohibition on the sale and distribution of drones and drone technology to foreign countries, in order to prevent the proliferation of this menacing threat to world peace, freedom, and security, and

(4) An immediate end to this lawless behavior of drone warfare that violates many international laws and treaties.

Closing arguments in the drone protesters’ trial are to take place at 4:45 p.m. today in
DeWitt Town Court, 5400 Butternut Drive in DeWitt.

Testimony concluded Jan. 23 in the the trial of a group of activists who protested the use of reaper drones at the Hancock Air Base in October 2012.

Most of the defendants are representing themselves. A verdict from Judge David Gideon is expected Feb. 7.

The trial started Jan. 3. The group said in opening statements their intent was not to break local laws but rather to uphold international law, under which they say indiscriminate attacks on civilians and terrorizing of civilian communities are forbidden.

The defendants are a part of Upstate NY Coalition to Ground the Drones and End the Wars.

Here is a video of the Oct. 25, 2012 protest.http://www.syracuse.com/news/index.ssf/2014/01/closing_arguments_tonight_in_drone_protesters_trial.html

“Paki Wieland of Northampton on trial over charges stemming from drone protest at Syracuse military base” (January 22, 2014::

NORTHAMPTON — Paki Wieland is an old hand at committing acts of civil disobedience for causes she believes in.

But the longtime peace activist and resident of Langworthy Road said she did not view her actions outside an Air National Guard base in Syracuse, N.Y., last October in that same category.

“We weren’t doing acts of civil disobedience, we didn’t go to break the law, we went to enforce one, to hold these men accountable for the Constitution they swore to uphold,” said Wieland, 70, who said she has stopped keeping count of the number of times she has been arrested.

Wieland, a retired professor at Antioch University New England in Keene, N.H., and 15 other members of the Upstate New York Coalition to Ground the Drones and End the Wars are being tried on charges of trespassing and disorderly conduct after being arrested in DeWitt, N.Y., Oct. 25, 2012.

Members of the group were holding a rally at the gates of Hancock Air National Guard Base when they were arrested. 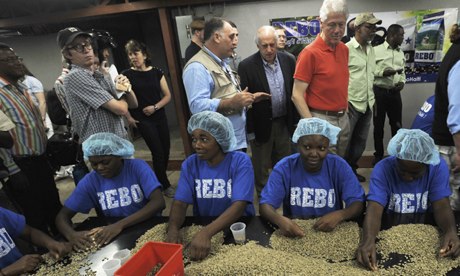 Haiti Earthquake: Where is US Aid Money Going? Get the Data
Feb 05