Did Texas Governor Perry Cover Up a State-Sanctioned Murder? 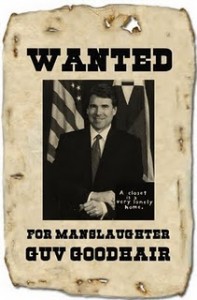 At a Tea Party rally a few months ago, Gov. Rick Perry of Texas addressed a group that wanted Texas to secede from the union. Instead of pouring cold water on the idea, and saying, for example, that we once fought a civil war over this issue and that the group’s side lost, Perry offered some patently false nonsense about how Texas’s agreement to join the union had an escape clause. Well, it didn’t, and it doesn’t.

Perry might have earned the title of Most Irresponsible Public Official in America based on that moment alone. Earlier this month, however, he supercharged his candidacy.

As well all know, Texans are very fond of imposing the death penalty. They are not, however, reckless, kill-crazy psychopaths. No, they insist that before a person can be considered for execution, he or she must have done something wrong. Well, it turns out that a man named Cameron Todd Willingham, who was executed for the crime of arson that he supposedly committed in 1991, may have been innocent, and may have been put to death, well, wrongly. In what certainly seemed to be the least the state could do, the Texas Forensic Science Commission came together to look into possible missteps in the criminal investigation. They hired an arson expert named Craig Beyler, who in September released a report which called the original probe slipshod. Two weeks ago, the Commissionwas going to hear testimony from Beyler.

However, a funny thing happened the day before: Governor Rick “If You Won’t Secede, I’ll Get Rid of You” Perry removed three members of the commission. He replaced the chairman with a hardline conservative prosecutor, who canceled the hearing at which Beyler was to testify. The new chairman said that he first learned of his appointment when it was announced. No new meeting has been scheduled.

What’s Perry covering up? Something more than the death of an innocent man, apparently. Willingham’s defense lawyers had urged Perry to grant a stay of execution, pointing to a report by another arson expert who said “there is not a single item of physical evidence in this case which supports a finding of arson.” Perry denied a request for a three-day reprieve during which a court could review the report.

The people in Texas like their death penalty, but no one wants to see it applied with unseemly haste, and certainly nobody wants to see innocent people killed. After al, a lot of the voters think that they themselves are innocent, and none of them wants to be injected with a lethal drug, regardless of how human it amy be. That’s why even though all the gubernatorial candidates in next year’s race support execution, but none will look into a TV camera and say “Hey, look, let’s be grown-ups. Mistakes are going to happen. Yeah, we’re going to kill an innocent person or two, but your appetite for justice is going to get satisfied.” Voters don’t want to hear that; they want to hear that their officials have created a noble system that will punish the wicked severely while dispensing justice infallibly. Now Perry has to stand before those voters and admit that not only may have the state murdered someone, but that now he’s an accessory after the fact and the ringleader of a cover-up. Not in so many words, of course, but you get the idea.

I don’t think this is going to sit well with the sanctimonious voters of Texas. They might force Perry to secede from the governor’s mansion, if only so they can insert someone who will promise that it’s possible to kill people without getting blood on your hands.

Britain must Publish US Intelligence on Torture, Court Rules
Oct 16