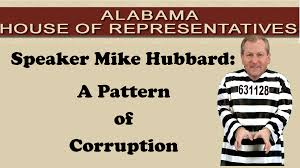 Speaker of Alabama’s House of Representatives Mike Hubbard was indicted by a grand jury and has been charged with 23 class B felony counts, including using his office for personal gain and soliciting things of value, AL.com reported.. If convicted, Hubbard, a powerful player in the state’s GOP, faces a “maximum penalty of two to 20 years in prison and up to $30,000 in fines for each count.”

Among Hubbard’s charges are:

AL also reported that, according to the indictment, Hubbard solicited favors from the who’s who of the Alabama GOP, including:

Of course, Hubbard is denying any wrongdoing, and is calling the move purely political. On a video posted on Facebook, he said,

“Friends if there was any doubt that this was a political witch hunt, I think it is pretty clear right now that is exactly what it is. This has been going on for two years, dragging on and on, and here they come two weeks before an election and make these allegations. The fact is that we’ve done some great things in this state and some powerful people don’t like it.”

The investigation against Hubbard also resulted in charges in two other Republican members of Alabama’s house: Greg Wren and Barry Moore. Rep. Wren pleaded guilty to a misdemeanor charge of using his office for personal gain, resigned his seat in the House, and was ordered to pay $24,000 in restitution. Rep. Moore was charged with perjury and giving false statements to a grand jury in January. He has pleaded not guilty, and trial is scheduled for later this month in Lee County.

Hubbard is just the latest in the increasingly-long line of corrupt Republican politicians to get caught red handed. The GOP always contends that these investigations are just political maneuvers by the Left, but they seem to be resulting in actual charges more and more lately, proving the party is as corrupt as we all know it to be.