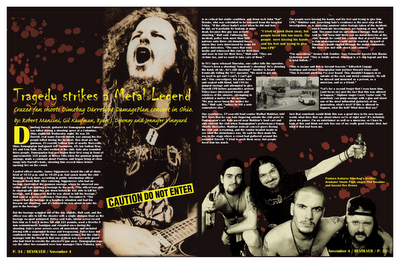 A schizophrenic Marine with rabid obsessions and command hallucinations killed heavy metal guitarist Dimebag Darrell in 2004. The "reasonable" explanations of the killer's motive melted away.

An essay found at the Roadrunner Records site rails against Americans for not standing up to autocrtatic rule - the author seems to suspect that Dimebag's murder in 2004 was political. He jumps off from the killing of Dimebag to rant on the fascist state of political affairs in the failed Republic - implying a connection. And there may be one, though it remains to be shown. I'm posing the question - was Gale's murderous rampage provoked by mental illness or mind control?:

Best known as a founding member of the heavy metal bands Pantera and Damageplan, he was also active in country music, notably the project Rebel Meets Rebel. Remembered for his amiable nature and rapport with fans, critic Greg Prato [1] describes Abbott as "one of the most influential stylists in modern metal."

Abbott was shot to death while performing with Damageplan on December 8, 2004. ...

On December 8, 2004, while performing with Damageplan at the Alrosa Villa in Columbus, Ohio, Abbott was shot and killed onstage by former U.S. Marine Nathan Gale. Abbott was shot 3 times in the head, the third time at point blank range, killing him instantly. He was 38 years old.

According to police, Gale fired a total of fifteen shots, taking the time to reload once, remaining silent throughout the shooting. When security staff tried to stop him, Gale fired at them, wounding Paluska, and killing Halk, who had attempted to stop the gunman with a beer bottle as a weapon. Thompson fought with Gale for a short time, stopping him from killing Vinnie Paul Abbott and John Graham, as well as knocking off Gale's glasses (preventing him from seeing Officer Niggemeyer just minutes later), before being fatally wounded by Gale. Audience member Nathan Bray, who jumped onstage to try to give CPR to Dimebag and Thompson, stood up and took a single step towards Gale before being shot once in the chest. Brooks was scuffling with Gale onstage but was overpowered and taken hostage in a headlock position. Brooks was shot several times (once in the right hand, his right leg, and his right side) while attempting to get the gun away from Gale.

Five officers came in the front entrance led by officer Rick Crum, and moved toward the stage. Officer James D. Niggemeyer came in through the back door, behind the stage. Gale only saw the officers in front of the stage; he never saw officer Niggemeyer. When the hostage moved his head, Officer Niggemeyer shot Gale in the face with a police-issued Remington 870 shotgun. Gale was found to have 35 rounds of ammunition remaining. Officer Niggemeyer's shot was as accurate as he could have hoped for, hitting Gale with 8 out of 9 pellets from the shotgun shell.

During the rampage, nurse and audience member Mindy Reece, 28, went to the aid of Abbott. She and another fan administered CPR until paramedics arrived, but were unable to save him.

Following the shooting, Darrell Abbott was buried in a KISS Kasket at the Moore Memorial Gardens Cemetery in Arlington, Texas.

Niggemeyer received a commendation from the Ohio Peace Officer Training Commission for his outstanding police work in time of crisis as well as The National Rifle Association award as 2005 Law Enforcement Officer of the Year. The five other officers that were first on the scene received Ohio distinguished law enforcement medals for their brave work. In 2006 James Niggemeyer penned the foreword to A Vulgar Display Of Power: Courage and Carnage at the Alrosa Villa.

Early theories of motive suggested that Gale may have turned to violence in response to the breakup of Pantera, or the public dispute between Abbott and Pantera singer Phil Anselmo, but these were later ruled out by investigators. Another theory was that Gale believed Abbott had stolen a song Gale wrote. In the A Vulgar Display Of Power book, several of Gale's personal writings, given to the author by Gale's mother, show that the motive of Pantera's breakup or the idea of stolen songs is false, and that due to his condition, paranoid schizophrenia, he believed that the band could read his mind, were stealing his thoughts, and laughing at him.

Mom Of Concert Killer: He Was Sick

The mother of the man who gunned down former Pantera guitarist "Dimebag" Darrell Abbott and three others during a concert said her son was discharged from the military because he suffered from paranoid schizophrenia. Mary Clark told Columbus television station WCMH on Wednesday that her son, Nathan Gale, was released from the Marines in 2003 after the military diagnosed the disorder. ...

Gale came home from the Marines with medication for his illness, Clark said, but she did not know whether he took the pills. Maj. Jason Johnston, a Marine Corps spokesman at the Pentagon, said legal reasons prohibit him from for discussing why Gale was discharged. ...

Was Gale in a hypnotic state?:

"Police: Killer Didn't Say Anything To DIMEBAG Before Shooting Him"

Gale had no discernible motive:

Regarding the murder of "Dimebag" Darrell Abbott by Nathan Gale, Columbus police Sgt. Brent Mull said "We don't see any motive. We may never know a motive unless (Gale) left a note." Over 250 people who were in the club interviewed by police.

It was an election year, and voting irregularities in Ohio were reported widely:

"The assassination of Dimebag happened December 8th, 2004. The is exactly 24 years to the day from John Lenon's assassination. Nathan Gale, 25, just happened to be a former marine. A cop that just happened to be near, entered the club, and killed Gale. Seems a lot like the Oswald case, doesn't it? This happened in Columbus, Ohio, were all the election irregularities were focused. Where the fake homeland security problem happened. ... "

His demeanor during the shooting shows premeditation and most likely programming too, though the stone cold killer who has planned methodically for vengeance will also operate to a pre-determined plan or script. The side effects of the drugs can also induce trance states. This is why it is that for many conditions like PTSD and other related chronic conditions, a person is better off with nutrition based therapies like those outlined at Journal of Orthomolecular Medicine, Orthomolecular.org, whale.to (see nutritional medicine), and other sites. We have a five year track record of solid outcomes from a med/psych harm reduction programs in Seattle and Vancouver BC; Archie Kalokerinos did opiate detox with megadoses of liquid variants of vitamin C.

According to wikipedia, the murderer’s birthday is 9/11.