"If I were king, you would be fast against the wall." - Radiohead

This afternoon, I found this article at the "Conservative" Voice site that claims the Left is some sort of front for Nazism. It was written by one Benyamin Solomon - I did a Google search and discovered there are no articles on the Net written by a "Benyamin Solomon." In fact, no such author exists. Very curious, I thought, and returned to the "Conservative" Voice site and clicked on other articles by "Benyamin." The reader can do the same here:

I found the author's profile. Come to find out that his name isn't "Benyamin Solomon" at all. It's Aaron Epelbaum.

Who are the real Nazis

The political left has portrayed President Bush as a Nazi and drew up false parallels between America under President Bush and Germany under Adolf Hitler. They cite what he said about Iraq including the claim that Saddam had WMDs, which turned out to be false. Back then, there really seemed to be a lot of evidence coming out that he did have WMDs. ...

"Conservatives" are on top of it, aren't they? In his profile, young, innocent mind controlled Aaron writes: "about me: I will refute leftists including liberals and the PC system, which is controlled by the left till the very end. The left can't get along with facts."

Dear Little Aaron: Nazis hate Lefists more than anything in the world - not Jews and gays and "useless eaters," exclusively. In fact, the Nazis started killing Leftists before they turned on the Jews of Europe. You talk exactly like a Nazi dupe, and we Leftists think of you and your programmers as ignorant, hateful, genocidal asswipes who are systematically manipulating your country into open fascist rule. 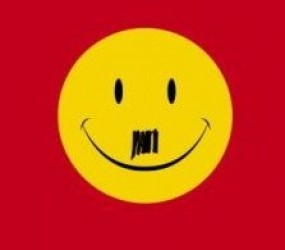 You see, Aaron, we only want you to grow up thinking humanely and rationally - and you have a long way to go, you poor, young, innocent, willfully ignorant, nazified puddle-stain of fascist puke.