​An heir to the H.J. Heinz ketchup fortune, Heinz is on the conservative branch of the Heinz family tree. The liberal side produced Teresa Heinz Kerry, the filthy rich wife of Sen. John Kerry. That's got to be hard for Clifford, who once bankrolled a failed Senate campaign for Lt. Col. Oliver North, the right-wing fall guy for Iran-Contra.

Famously reclusive, Clifford Heinz prefers to let his money do the talking. But a 2004 Los Angeles Times profile revealed one gem: When the Dalai Lama got the phone call telling him he'd won the Nobel Peace Prize in 1989, he was staying at Clifford Heinz's house. If anyone's trying to make a backdoor money connection between Michele Bachmann and the Dalai Lama, there it is. 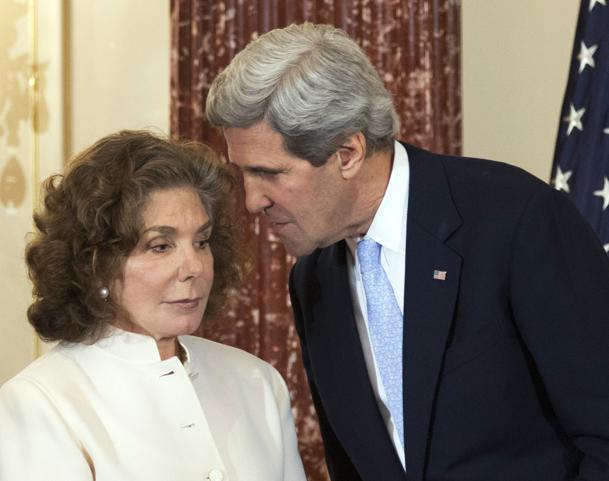 In this Feb. 6, 2013 file photo, Secretary of State John Kerry whispers to his wife Teresa Heinz Kerry during the ceremonial swearing-in for him as the secretary of state, at the State Department in Washington. Kerry's family financial portfolio could grow by hundreds of thousands of dollars as a result of the $23 billion mega-deal between Nebraska billionaire Warren Buffett and a Brazil-owned investment firm to buy out ketchup and food producer H.J. Heinz Co. (AP Photo/Manuel Balce Ceneta, File) -- Boston Globe, February 14, 2013

Along with power and wealth, the clan Teresa Heinz Kerry first married into has lived through tragedy and estrangement.

A grandson of H.J. Heinz, Clifford has long -- and quietly -- underwritten conservative causes from his base in Orange County. He has acquired a wealth, celebrity and power separate and apart from the Pennsylvania wing of the family....

Heinz has helped fund the Free Congress Foundation, a Washington-based think tank, and has underwritten the campaigns of various Republicans, including Rep. Dana Rohrabacher of Huntington Beach. He has long funded ethics programs and endowed a chair for peace studies at UC Irvine.

Clifford Heinz, 85, declined to be interviewed. His attorney, Bernard I. Segal, said his client had no desire to be drawn into a public controversy with Heinz Kerry. To put it mildly, the two have little in common politically.

Clifford Heinz was a key financial supporter of Oliver North, contributing $25,000 to his unsuccessful Senate campaign in 1994 -- the same year Teresa Heinz sharply attacked the former U.S. Marine colonel and his role in the Iran-Contra matter in a speech before the National Assn. of Christians and Jews.

"It is difficult to imagine anything more cynical than Oliver North running for Congress," she said in her speech. "This is a man who used his moment in the public eye to spit not just on politicians, but on the institution of Congress itself."

Not long after the death of patriarch H.J. Heinz in 1919, his descendants began migrating to California, and a Western branch of the family came to outnumber the Eastern branch. By the Depression, a full-blown schism had occurred, centered around who would get the family wealth held by the senior Clifford Heinz.

A director and vice president for labor relations, Clifford had always been second fiddle to his older brother, Howard. And by the Depression, Howard's son Jack was playing an influential role in the family business.

The battle began in March 1935, when the senior Clifford Heinz died of pneumonia at a Palm Springs hotel. He had left Pittsburgh three months earlier, hoping the dry desert air could cure him. Clifford's third wife, Vira Ingham, was by his side when he died.

But the three children from his second marriage -- Clifford, Nancy and Dorothy -- were never informed of their father's illness, even though they lived only a few hours away in Beverly Hills. Their mother was socialite Sara Moliere Young, who had run afoul of the Pittsburgh family.

After their father's death, the teenage children received a second jolt, discovering that in Clifford's final will, they had been disinherited. They came to believe that decision was made on his deathbed under pressure from the elders of the Pittsburgh clan.

"They tried to cut us out of the will," recalled Nancy Heinz Russell. "Dad was not a strong, forceful man ... and the Heinz family hated my mother. The Eastern family hated the Western family."

The resulting lawsuit dragged on for decades, ultimately resulting in the children getting a large share of key Heinz trust funds.

It wasn't the only time the family played tough when it came to money.

Rust Heinz, grandson to the company founder, moved to Pasadena in the 1930s and married Helen Clay Goodloe, daughter of a prominent family from Kentucky that included a U.S. senator and an ambassador.

When Rust was killed in a 1939 car accident, Heinz family attorneys persuaded his wife to take $25,000 and forfeit any claim to the family money. The couple had separated, but they were still legally married.

The inside story of what had happened was detailed in a newspaper article 16 years later in the Pittsburgh Press. The headline: "Heinz widow traded fortune for $25,000."

After a second unhappy marriage, Helen Heinz took her life, according to her daughter, Margot Pierrong, a convention planner who lives in Anaheim.

"She was so young," Pierrong said. "I am not bitter, but what the Heinz family did to my mother will come around."

Out of Public View

Irene Heinz, the eldest child of the company founder, married and moved to Manhattan, and her branch of the family virtually disappeared from public view.

Irene's husband, John LaPorte Given, suffered a nervous breakdown -- under the harsh treatment of the Heinz family, according to his granddaughter. He retired early to play golf, and gave away tens of millions of dollars to Harvard University and other schools.

A daughter, Sarah Given, came to distrust the family money, saying it destroyed personal character. She married twice, the second time to a firefighter.

Sarah's younger brother, John Given, became estranged from the family and was known for eccentric behavior. New York City police arrested him in 1948 on allegations that he beat a man with his cane.

When police examined the cane, they found a 28-inch dagger in its shaft. Four years later, after he fired a pistol at a neighbor's birthday party, he was ordered by a New Jersey magistrate to leave town.

Given, who never married and suffered from alcoholism, died in 1957. In his will, he instructed executors at Chase Manhattan Bank to find deserving beneficiaries for his estate.

They gave more than $4.5 million to charity.