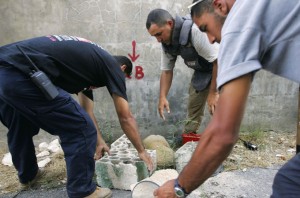 The first comprehensive report into cluster bombs around the world has been released by Cluster Munition Monitor, a civil society-based programme providing research on cluster munitions.

Cluster bombs are a particular menace because they often fail to explode on impact, leaving behind de-facto landmines.

The report, released on Monday, found that seven countries have destroyed their stockpiles. "Norway, Belgium, Spain, Portugal, Colombia, Moldova and Montenegro have destroyed their weapons, and 11 others are in the process of doing so," Conor Fortune, media officer with the Cluster Munition Coalition, told Al Jazeera.

"The UK is a key country that has destroyed more than a third of its stockpile. It has been one of the biggest users in the last decade, in the Balkans and Iraq, so it is important that they are destroying their stockpile."

Fortune said that the biggest culprits are the US, Russia, China and Israel: "With the exception of China, all have used cluster munitions in the last decade."

"The US has only agreed to ban the export on munitions and claim that they will phase out use of the weapons by 2018," he said.

The report found that of the 16,816 cluster munition casualties confirmed globally through the end of 2009, the vast majority (14,719) were caused by unexploded munitions that failed to detonate during attacks.

However, the report said that most casualties go unrecorded and it is likely that the actual number of casualties was at least between 58,000 and 85,000.

According to the report, 74 nations currently had stockpiles of cluster bombs and some 23 countries remained contaminated by the deadly weapons.

"Laos is the most heavily affected country in the world and that is one of the reasons why it will host the upcoming Convention on Cluster Munitions," Fortune said.

The first meeting of more than 100 countries that have signed up to the convention will take place in Vientiane, Laos from November 8, 2010.

"There is real momentum behind the ban on cluster munitions," Steve Goose of Human Rights Watch, said.

"It is encouraging to see so many countries showing such commitment to eradicating cluster munitions and their severe impact on civilians now and forever."

Goose, who took part in the talks that brought about the Convention on Cluster Munitions, said that the impressive number of signatories to the ban convention, the short time to bring it into force, and the rush to implement its life-saving provisions are all very positive.

However, according to the report for 2009, casualties have been recorded in at least 27 states and three other areas affected by cluster munitions.

"Southeast Asia, the Middle East and the Balkans in Europe are all affected. This is a problem that has resonance in many parts of the world and that is why we are seeing interest from many countries," Fortune said.

"Things are going more quickly that anybody expected - it is less than two years after the convention opened for signature and countries have already started implementing it and destroying their stockpiles, putting them out of use forever.

"We are very encouraged at the rate that countries have started destroying their weapons, but the work on the cluster munition ban is far from done and we have lots of work to do still."