Private apologies are not enough for a defender of torture, the architect of America’s drone program and the most talented liar in Washington. The nation’s top spy needs to go

As reports emerged  that an internal investigation by the Central Intelligence Agency’s inspector general found that the CIA “improperly” spied on US Senate staffers when researching the CIA’s dark history of torture, it was hard to conclude anything but the obvious: John Brennan blatantly lied to the American public. Again.

“The facts will come out,” Brennan told NBC News in March  after Senator Dianne Feinstein issued a blistering condemnation of the CIA on the Senate floor, accusing his agency of hacking into the computers used by her intelligence committee’s staffers. “Let me assure you the CIA was in no way spying on [the committee] or the Senate,” he said.

After the CIA inspector general’s report completely contradicted Brennan’s statements, it now appears Brennan was forced to privately apologize to intelligence committee chairs in a “tense” meeting earlier this week . Other Senators on Thursday pushed for Brennan  to publicly apologize and called for an independent investigation. Sen. Ron Wyden said it well:

But the director of the CIA – and the architect of America’s drone program, who will be all but defending torture for the next several weeks – should do more than that. Apologies aren’t enough: John Brennan should resign.

The latest row isn’t the lone CIA-spying-on-the-Senate scandal on Brennan’s watch. In a little noticed story last week, McClatchy reported that the CIA  has also been spying on emails from whistleblower officials and Congress:

The CIA got hold of the legally protected email and other unspecified communications between whistleblower officials and lawmakers this spring, people familiar with the matter told McClatchy. It’s unclear how the agency obtained the material. 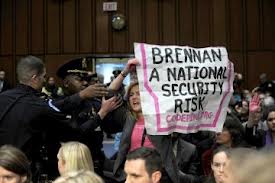 That spying scandal, as well as the one Brennan has actually owned up to, both spawn from the Senate’s damning 6,000-page report on CIA torture, part of which is supposed to be publicly released any day now. The document will serve as yet another reminder that Brennan, when he worked in the CIA during the Bush years, supported many of the barbaric techniques used on prisoners after 9/11, which the Obama administration claims to oppose.

Brennan’s one-time torture endorsement made a newly elected President Obama pass him over when the CIA director job was open in 2009. But failing upwards has been a Langley specialty over the past decade. As theAssociated Press has documented , many agency officials involved in the CIA’s worst human rights abuses and intelligence disasters have not only been shielded from punishment, but promoted . In 2013, after a signature drone strike-filled  stint as Obama’s top counterterrorism advisor, Brennan was successfully confirmed as CIA director.

Almost immediately, members of the Senate intelligence committee started accusing Brennan of dragging his feet and stalling  on the CIA’s response to the torture report behind closed doors, even as he told them in public he was doing everything he could to move it right along. Just this week, the New York Times reported how Brennan’s been colluding  with his close friend and former CIA director George Tenet, all the while keeping him closely apprised of the redaction process of the report’s release (which, bizarrely, the CIA has been allowed to lead ).

Lest we forget, Brennan’s most recent false statement is not his first James Clapper-esque  experiment in misinformation. The nation’s top spy is, in fact, a proficient and skilled liar. As Obama’s top counterterrorism advisor for his entire first term in the White House, Brennan built, oversaw, executed and excused America’s robotic assassination program. During a speech in 2011, the keeper of the kill list  said there had not been “a single collateral death” from US drone strikes  because of their “exceptional proficiency [and] precision”. But as the Bureau of Investigative Journalism reported :

[J]ust three months beforehand, a major US drone strike had killed 42 Pakistanis, most of them civilians. As well as being widely reported by the media at the time, Islamabad’s concerns regarding those deaths were also directly conveyed to the ‘highest levels of the Administration’ by Washington’s then-ambassador to Pakistan, it has been confirmed to the Bureau.

Internal intelligence documents leaked to McClatchy later  confirmed Brennan to have lied at the time, not to mention the countless media reports before and since documenting other cases of US drone strikes killing civilians. During his confirmations hearings, Brennan promised to be “as open as possible with these programs” ; we know almost nothing. What we do know, has been pried from the CIA  by lawsuits and court orders. 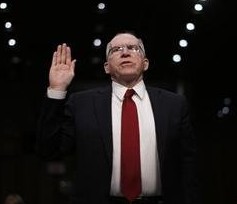 When Brennan was approved by the Senate, many of his friends told the media  he wanted to get the CIA out of the drone business and hand operations over to the Pentagon, but of course once he assumed his office, he seems to have reversed course and kept the drone program under CIA control .

Brennan also fed the public wildly inaccurate details  about the Osama bin Laden raid in 2011, and despite condemning leaks  of classified information from others, he has often leaks classified information  himself to suit his own needs. This is not the type of guy who is going to resign because of some report he doesn’t like; this is the type of spy who apologizes even though he’s not sorry, who lies because he doesn’t like to tell the truth.

The National Security Agency and the Central Intelligence Agency have been allowed to lie brazenly to Congress , the courts and the public  for far too long. It’s far past time for the Obama administration to bring a little accountability to the intelligence community. It’s time for Barack Obama to fire John Brennan.