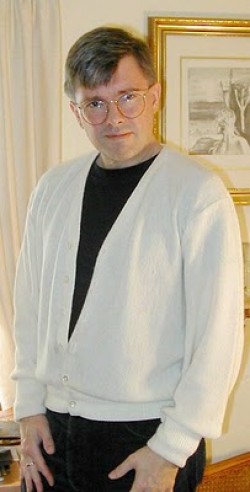 The new charge came in an April federal grand jury indictment that also formalized the other felony charges faced by the founder of National Vanguard, a neo-Nazi group that collapsed after Strom’s arrest). In addition to the “coercion and enticement” charge, they include four counts of receipt of child pornography (via a computer); one count of possession of child pornography; and one count of obstructing justice by assaulting or threatening a witness.

It wasn’t clear from the indictment what Strom is accused of with regard to the young girl, and officials have not publicly detailed their allegations. The charge says only that Strom enticed or attempted to entice or coerce the girl. In a widely circulated E-mail, meanwhile, Strom pleads for money for his jail “canteen fund,” complains that he’s being kept in solitary confinement, and asserts that he is “not guilty of the charges against me” — even though Strom apparently signed a notarized “contract” with his wife Elisha last year in which he promised to attend counseling until he “has been declared free of pedophilia.” Elisha Strom posted a copy of the document on a neo-Nazi site after her husband’s arrest.

Kevin Strom also allegedly said in his February E-mail that he had written “a long and detailed account of the spousal betrayal which has resulted in my current situation,” but added that his lawyers had advised him not to circulate it. Elisha Strom has hotly denied that she had anything to do with Strom’s arrest.

Strom, who long kept a collection of cheesecake photos of young girls on his website under the heading of “feminine beauty,” ended his E-mail on an upbeat note. “I remain,” he said, “dedicated to the cause of life and the ennoblement of man.”

Dressed in the standard black and white prison stripes and girded in shackles, Kevin Alfred Strom strode into the U.S. District courtroom with a beatific smile, and then noticed an elderly couple amid the 10 or 15 people in the audience. “Thanks for coming,” he said to them. “I love you. Tell the kids I’m staying strong.” He then took a seat as U.S. District Judge Norman K. Moon strolled in to consider the arguments before him.

At the May 30 hearing, prosecutors revealed that they will soon be adding more charges as the result of new evidence gained from a computer hard-drive. In a motion to sever the new evidence from the current case, Strom’s attorney, Assistant Federal Public Defender Andrea Harris, disputed whether the images seized from the computer are of children under the age of 18. “There is no evidence that the images referenced in the superseding indictment from the 40 GB depict minors, and other evidence indicates that those images in fact depict adults,” reads the motion filed by Harris. 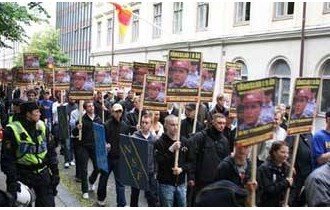 The motion also took issue with the government’s contention that Strom solicited a minor identified only as “A.A.” Strom sent gifts to A.A. and pictures of A.A. were found on one of Strom’s computers. Harris explained that A.A. was a friend of one of his children. Strom also allegedly sent A.A. a sonnet. “There is not a shred of evidence that such ‘sonnet’ was ever conveyed in any way, shape or form to anyone, much less to A.A.,” the motion states.

As the trial was originally scheduled for late June, Harris requested a delay to view some of the new evidence, which includes videotape interviews of two minors. Deferring a decision on the motion to sever, Judge Moon indicated he is likely to grant the delay. The new trial date would likely be set no sooner than the fall.

More on the charges:

Between September 2005 and December 2006, Strom got to know, contacted and eventually harassed the girl, according to the court filing.

Strom went to the child’s school, prosecutors said, and on one occasion hid behind a tree so the girl’s parents would not see him.

The student transferred to another school because of the repeated attempts Strom made to contact her, but the defendant researched and discovered the girl’s new class schedule, prosecutors allege.

Using a pseudonym, the document states, Strom sent the girl gifts, including a CD, a DVD, an angora sweater and a bouquet of roses.

Mark Potok, the director of the Intelligence Project, an arm of the Alabama-based Southern Poverty Law Center that researches and tracks hate groups, said Strom has been involved with the neo-Nazi movement for 30 years.

In 2005, Strom split with the National Alliance – formerly the largest white supremacist group in the country – to form the National Vanguard, which he ran from his Greene County home, Potok said.

According to the prosecution’s recent motion, a search of Strom’s personal computer revealed poems, “to be sung to the tune of ‘Here We Come a-Wassailing,’” written by the defendant, including the phrases “my love for [the girl] is not a sin.”

In addition to the prose, hundreds of pictures of the girl and hundreds of images of other children, some unclothed and in sexually suggestive positions, were stored on Strom’s computer, according to the court papers.

An unidentified witness in the case, prosecutors said, caught Strom naked at his computer looking at pictures of young girls. Paperwork filed by the defendant indicates that the witness is the defendant’s wife, Elisha Strom.

As a result of the his wife’s discovery, the couple signed a one-page notarized contract, prosecutors allege, in which Strom agreed to see a counselor until he is “free from being sexually drawn to children.” Prosecutors attached a copy of the document to their motion.

At one point, however, Strom labored under the mistaken impression that his wife had gone to authorities with her allegations against him, according to the prosecution’s motion. Consequently, Strom “accelerated a campaign to intimidate and discredit her,” which included physical assaults and verbal threats, prosecutors claim.

Defense attorneys say that there is “no evidence to suggest that Strom actually touched [the girl] or that she ever touched him.”

“He is essentially charged with attempting to make an attempt to commit sexual battery,” a defense motion states.

A judge will hear arguments on whether the charges against Strom should be divided into separate trials on Tuesday.

From the Archive — Seymour Hersh: US has Videotapes of Boys Being Sodomized at Abu Ghraib
Nov 04

From the Archive — Seymour Hersh: US has Videotapes of Boys Being Sodomized at Abu Ghraib