by Frank Cocozzelli
Jun 30, 2009
Originally posted at Talk to Action 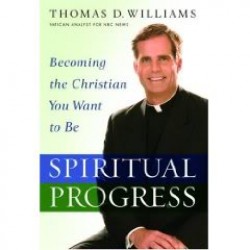 The go to guy at CBS News for all-things Catholic is one Father Thomas D. Williams. Never heard of him? Well, if you watch The Morning Show's Maggie Rodriguez or the CBS Evening News's Katie Couric you may very well see Fr. Williams appear live via satellite from Vatican City. But "the Tiffany Network" will also probably fail to disclose that Fr. Williams is also a member of the Legion of Christ, a reactionary order that is squarely aligned with American movement conservatism and that espouses the most conservative of Catholic views on bioethical issues such as LGBT equality, abortion and stem cell research.

The telegenic clergyman has been a religious analyst for NBC/MSNBC and now with CBS. His web site's biography tells us "Fr. Williams holds degrees in theology, philosophy and business administration, as well as a diploma in languages and classical humanities" as well as describing him as "He is senior fellow of the Saint Paul Center for Biblical Theology, and a member of the Pontifical Academy of Saint Thomas Aquinas." For the record, the Pontifical Academy of Saint Thomas Aquinas is now headed up by Monsignor Lluís Clavell of the secretive and traditional-minded Opus Dei.

Then comes the kicker: "...Fr. Williams teaches at the Regina Apostolorum Pontifical Atheneum, a university run by the Legionaries of Christ, the religious congregation of which he is a member since 1985."

This is significant because the Legionaries of Christ is a secretive, ultra-conservative order with a troubling past and an uncertain future. Its activities have been restricted or it has been banned outright in at least eight American dioceses for practicing cult-like control over its members. Archbishop Edwin O'Brien of Baltimore was going to expel the organization until the Vatican stepped in and asked that that he instead engage in a dialogue with the group's superior general. Still suspicious of the group's activities (Archbishop O'Brien has accused the Legionnaires of "blind allegiance, lack of "respect for human dignity for each of its members,"" as well as "heavily persuasive methods on young people"), the Baltimore archbishop keeps the Legionnaires on a very tight leash.

And then there are the sex scandals of the Legionnaires' founder, Father Marcial Maciel. Maciel had been accused of pedophilia since the 1950s and again in the 1970s. Originally to have been found innocent of the earlier charges, the Vatican reopened the investigation to the later incidents. In 2006 the Vatican forced Maciel into retirement addition and subsequently died in 2008. A year after his death the news surfaced that he had also fathered a child.

The group's influence is significant in part because it targets wealthy and influential individuals for recruitment.

Rev. Williams is unrepentantly pre-Vatican II when it comes to dissent in the Church. A tagline for one of his attack pieces on pro-choice Catholic Democrats in 2008 was "Pro-choice Catholics just don't get it." It can be found at the reliably socially conservative The National Review Online. And if you're looking for Rev. Williams to take on opponents of universal health care and distributive justice or chastising supporters of capital punishment -- issues near and dear to Catholic social teachings -- don't bother looking, you won't find it. Besides writing a regular column for NRO, he has also contributed to Deal Hudson's Crisis magazine. ...