A U.S. Army intelligence card on Johann "Hans" Breyer, obtained by the Associated Press from the National Archives, indicates he served in Auschwitz as of Dec. 29, 1944 - four months after he said he deserted. The 87-year-old Philadelphia man is the target of a new German investigation on allegations of accessory to murder at Auschwitz. / AP Photo/National Archives 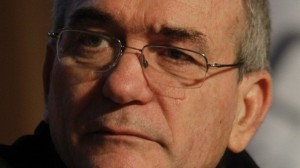 BERLIN The case of an 87-year-old Philadelphia man accused by Germany of serving as an SS guard at Auschwitz has largely centered on whether he was stationed at the part of the death camp used as a killing machine for Jews.

Johann "Hans" Breyer — while admitting he was an Auschwitz guard — insists he was never there. World War II-era documents obtained by The Associated Press indicate otherwise. The files provided by the U.S. Department of Justice in response to an AP request are now in the hands of German authorities, and could provide the legal basis for charging him as an accessory to the murder of hundreds of thousands of Jews in the Nazi death camp.

The retired toolmaker told the AP in September, when German authorities confirmed he was under investigation, that he was always at Auschwitz I, a smaller camp used largely for slave labor, and never entered Auschwitz II, also known as Auschwitz-Birkenau, where about 90 percent of the 1.1 to 1.5 million Jews and others killed in the camp were murdered.

The U.S. Justice Department documents tell a different story. One SS administrative document specifically notes that Breyer was an SS guard at Auschwitz II. Another indicates he served with a unit of the SS Totenkopf, or "death's head," that was assigned to guard Birkenau.

Kurt Schrimm, the head of the special German prosecutors' office responsible for investigating Nazi-era crimes, which has recommended charges be brought against Breyer in Germany, would not comment on specific pieces of evidence. But he said his office felt there was a strong enough evidence to prove that Breyer served in Birkenau.

"American authorities have been very cooperative in this case and have turned over a lot of evidence," he said. Breyer did not respond to requests for comment; his attorney, Dennis Boyle, said that he was aware of the documents but would not comment on their possible significance. "We are continuing our investigation and have no comment at this time," Boyle said.

The U.S. Department of Justice used the documents as part of its unsuccessful decade-long legal efforts to have Breyer stripped of his American citizenship and deported. The U.S. case centered upon issues such as whether Breyer had lied on his immigration papers and whether he had obtained U.S. citizenship through his American-born mother. That legal saga ended in 2003, with a ruling that allowed him to stay in the United States, mainly on the grounds that he had joined the SS as a minor and could therefore not be held legally responsible for participation in it.

The German investigation, by contrast, tries to prove that Breyer was a death camp guard, and the documents are now being used to support that case.

The dossier is now with prosecutors in the town of Weiden, near where Breyer last lived in Germany. The prosecutors are reviewing whether there is enough evidence to charge him with accessory to the murder of least 344,000 Jews as Schrimm's office has recommended, and have him extradited from the U.S.

For decades after the war, German prosecutors were only able to convict former Nazi guards if they could find evidence of a specific crime. But with the case of former Ohio autoworker John Demjanjuk, the legal thinking changed: Prosecutors were able to successfully argue that evidence of service as a death camp guard alone was enough to convict a suspect of accessory to murder.

Demjanjuk always denied being a guard anywhere. He died in March while appealing his conviction on 28,060 counts of accessory to murder. Breyer, however, acknowledges that he served with SS Totenkopf guard units — although not the one that served at Birkenau — and was stationed both at Buchenwald, a concentration camp located in Germany, and Auschwitz.

"I didn't kill anybody, I didn't rape anybody — and I don't even have a traffic ticket here," he told the AP in an interview at his home in northeastern Philadelphia in September. "I didn't do anything wrong."

He said he was aware of what was going on inside the death camp, but did not witness it himself. "We could only see the outside, the gates," he said. The interview was the only one Breyer has given to the media.

Breyer was born in 1925 in what was then Czechoslovakia to an ethnic German father and an American mother, Katharina, who was born in Philadelphia. Slovakia became a separate state in 1939 under the influence of Nazi Germany. In 1942, the Waffen SS embarked on a drive to recruit ethnic Germans there. Breyer joined at age 17 and was called up in 1943.

In testimony in 2002, he told the U.S. District Court in Pennsylvania that he had been sent to Auschwitz from Buchenwald in May 1944, then was given leave in August and returned home. He testified that he stayed in hiding in and around his home until the Soviet army closed in.

According to Breyer, the town's mayor provided him a letter asking for authorities to excuse his desertion because he had been needed on the family farm. Breyer testified that the letter worked with Nazi authorities, and that he was able to eventually rejoin his unit fighting outside Berlin in the final weeks of the war.

The documents, however, call his testimony into question, suggesting he was at Auschwitz through the rest of 1944 and into 1945, which would have meant he was there during the time some 426,000 Hungarian Jews were deported to Auschwitz, 320,000 of whom went directly into the gas chambers in Auschwitz-Birkenau.

A form from SS administrative authorities, filled out on Jan. 17, 1945 in Pressburg, which today is Bratislava, Slovakia, indicates that the previous day Breyer was there in person and applied for — and was granted — financial assistance for his parents' farm while he was away serving in the SS.

And it notes that Breyer at the time of the application was based at "Auschwitz 2."

In a 2002 case in the United States, the judge questioned the trustworthiness of the document — noting among other things that the birthdates of both of Breyer's parents were wrong, and the size of his family farm was written down as double what it actually was. In his testimony, Breyer suggested the document was "a fraud." But a court expert testified there was no evidence of a forgery. And U.S. federal prosecutors noted that Breyer's date of birth, date of induction into the SS, profession, parents' names and hometown are all correct. They also cited Breyer's first interrogation in 1991, when he told investigators he had gone home after "they granted me vacation end January `45" — which fits with the timeline of the document.

In the current German case, Thomas Walther, a former prosecutor in Schrimm's office, said it was also plausible to think that Breyer would have made his parents seem older, and his farm larger, in order to bolster the case for receiving assistance.

If nothing else, he said, the document and other evidence raise enough suspicion for prosecutors to file charges.

"Where this evidence fits has to be decided at trial, regardless of what the U.S. judge said the German court needs to decide," said Walther, who is now in private practice and represents several family members of Jewish victims at Auschwitz who have joined the investigation as co-plaintiffs as allowed under German law. Weiden prosecutor Gerhard Heindl, who is heading the current investigation, said he could not comment on any evidence.

Another document, an April 26, 1944 letter to the SS administration in Pressburg from the leader of the pro-Nazi Slovakian "Deutsche Partei," makes a case to have Breyer excused from his duties to help on his family's farm, noting that he was assigned at the time to the 8th Company of the SS Totenkopf in Auschwitz.

The 8th Company was stationed at Auschwitz II during the time Breyer is alleged to have been there, according to camp orders cited by Raul Hilberg in his book "The Destruction of the European Jews."

A U.S. Army intelligence file on Breyer, obtained by the AP, from a 1951 immigration background check also lists him as being with the SS Totenkopf in Auschwitz as late as Dec. 29, 1944 — four months after he said he deserted. The Army Investigative Records Repository file was obtained by the AP from the National Archives through a Freedom of Information Act request.

"Clearly we can't say what the result will be at the end of a long presentation of evidence to a court — that's not our job," Walther said. "But our contention is with this evidence the state prosecutors must file charges."