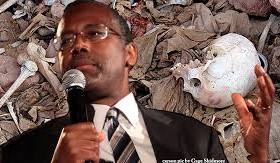 Ben Carson, the neurosurgeon and conservative activist who is considering a run for president in 2016, said on Monday that there should be few or no restrictions on how America fights its wars.
While being interviewed on Fox News’s “America’s Newsroom” by Bill Hemmer, Carson was asked about the fight against the Islamic State in Iraq and Syria.

“Our military needs to know that they’re not gonna be prosecuted when they come back, because somebody has, said, ‘You did something that was politically incorrect,’” the likely Republican candidate told his national television audience. “There is no such thing as a politically correct war. We need to grow up, we need to mature. If you’re gonna have rules for war, you should just have a rule that says no war. Other than that, we have to win. Our life depends on it.”
Ben Carson didn’t actually clarify what actions taken during a war might count as “politically incorrect,” which is a shame because it sounded quite a bit like Carson was arguing that he believes war crimes should be acceptable – and possibly necessary.
The Hill’s report added, “The U.S. is bound by the Geneva Conventions, which governs the way that signatories can treat captured enemy soldiers during wartime or while occupying a country. The conventions also require that states have laws that can be used to punish people who violate the standards.”
Yes, and Carson’s twisted perspective notwithstanding, that’s a feature of American leadership, not a bug.
As the Republican neurosurgeon sees it, abandoning all combat rules is a sign of “maturity.” I don’t really expect Carson to appreciate the point, but the truth is the exact opposite – those who insist that literally anything goes in war, and there are simply no limits whatsoever on violent actions, have adopted an overly simple, child-like worldview.
That such a twisted perspective would do irreparable harm should go without saying, though in the case of Ben Carson, it apparently needs to be spelled out.
Previous Article
The Privatization of War: Private Mercenaries and the “War on Terror” in American Foreign Policy
Next Article
Kissinger Mentor Fritz Gustav Anton Kraemer’s Obituary (2003)