Before Sarah Palin: " ... Upon Gillars’s release from prison, she ["Axis Sally"] resettled in Columbus with the help of nuns from Our Lady of Bethlehem Convent. She taught English, French, German, piano and drama at the Olentangy River Road School of the Sisters of the Poor Child Jesus, where she reportedly earned the affection of her pupils. ... " 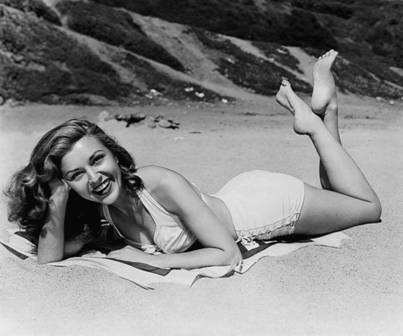 Americans who served in the armed forces will commemorate Veterans Day today with ceremonies and services.

Few are likely to commemorate it by picking up a new biography of the late Millard Gillars, a former Columbus resident whose nickname—and voice—were all too familiar to those who fought in World War II.

Known to Allied troops as Axis Sally, Gillars spent the war in Berlin broadcasting Nazi propaganda. Her morale-busting taunts, delivered in a menacing yet familiar Midwestern accent, were directed toward American troops stationed on the frontlines in Europe and North Africa, as well as the women waiting for them to return to the states.

“How did this woman with middle-class Ohio roots end up on the wrong side of history, convicted of aiding the Nazi and betraying her country?” author Richard Lucas asks in the prologue of Axis Sally: The American Voice of Nazi Germany.

Lucas, the grandson and nephew of World War II veterans, has a master’s degree in political science and a fascination with radio-based propaganda. He became intrigued by Gillars when he stumbled across an online archive of Axis Sally clips.

Lucas devotes the book’s 250 pages to an objective consideration of the question posed in his prologue. He examines her traitorous, anti-Semitic diatribes crimes with the moral scrutiny they deserve, yet he also displays compassion and curiosity in his investigation of a life “lived on the wrong side of history.”

Writing Axis Sally’s biography wasn’t an easy assignment, Lucas acknowledged. There were points, he said, when he had to “pull back” and ask himself “how is the best way to proceed?”

“You don’t want to write a biography that’s an apology for her actions,” he said. “I think everyone walks in with preconceived notions about … figures like Tokyo Rose or Axis Sally.”

A small-town Ohio girl, Gillars studied theater at Ohio Wesleyan University in Delaware before embarking on a mediocre theatrical career that largely consisted of working as a showgirl in vaudeville touring companies. She never really achieved success as a performer until she moved to Germany and became the highest paid on-air personality of Hitler’s Reichsradio.

As host and producer of several Nazi propaganda programs, Gillars spewed messages designed to destroy soldiers’ morale. Some of the nastiest broadcasts referred to the wives and girlfriends they’d left in America.

“While you are over in French North Africa fighting for Franklin D. Roosevelt and all his Jewish cohorts, I do hope that way back in your hometown nobody will be making eyes at honey,” Gillars said in a 1943 segment on her program Home Sweet Home.

At times, Gillars portrayed herself as a representative of the Red Cross in order to record clips of American POWs for a series she produced near the end of the war—perhaps to save her own skin as Allied forces advanced on Berlin. As part of a “Medical Report” segment, she broadcast slanted accounts of injured POWs and troops killed in action.

These segments, which referred to the next of kin by their names and U.S. mailing addresses, were meant to reinforce the idea that the injuries and deaths had been suffered in vain.

“I only wish you would get a little glimpse at the conflict going on in Normandy,” said Gillars in a 1944 Reichsradio special, Survivors of the Invasion Front. “Roosevelt asked you to do it for him, and you did. Wait until some of these human wrecks get back to you once again. You won’t even be able to recognize some of them.”

It’s clear why veterans groups lobbied for Gillars to be imprisoned, or even put to death, after she was returned to Washington D.C. to be tried for treason. Gillars was handed a 10-to-30-year sentence after being convicted on one charge, for having performed a Nazi propaganda play over the Berlin airwaves.

Gillars was released after serving only 12 years—which was still more than many Nazi conspirators and war criminals received, noted Lucas.

“There wasn’t a lot of logic to what happened to Tokyo Rose or Axis Sally compared to people who had blood on their hands,” he said.

Gillars’s lasting political contribution may be that her prosecution and appeal now serve as a legal precedent for treason charges based on words alone.

Upon Gillars’s release from prison, she resettled in Columbus with the help of nuns from Our Lady of Bethlehem Convent. She taught English, French, German, piano and drama at the Olentangy River Road School of the Sisters of the Poor Child Jesus, where she reportedly earned the affection of her pupils.

She also received her long-delayed degree from Ohio Wesleyan and attended Otterbein College. Neighbors of her Broadmeadows Boulevard apartment spoke well of her.

“She really found a measure of peace in Columbus,” said Lucas. “Some of the people who knew her in Columbus at the time didn’t know until she passed that she had such a background.”

“I’d really like to thank the people who spoke to me in Columbus,” the author added. “It’s a difficult subject to talk about.”

Gillars died in 1988 and was buried in an unmarked grave in the St. Joseph Cemetery in Lockbourne.