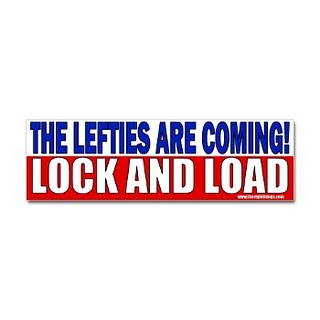 I had an epiphany this afternoon. I was watching Chris Matthews and this spokesperson for the Gun Owners of America was on. He defended all the people bringing Semi Automatic rifles to Obama events. So Matthews asked him, "Do you think people should be able to bring a loaded gun and sit in the first row of a President Obama event. And the gun owners flack says --"Yes."

My epiphany was :"Wow! There is a real American Neo-Fascist Movement abroad."

My disbelief came on top of the epiphany about the woman yesterday who was comparing Obama to Hitler. She has not a semester of history in her brain. That's why Barney said she was like arguing with a coffee table. Thats what I feel sometimes about some of our correspondents. Here's some real history, by the twentieth century's last great living historian Eric Hobsbwam.

"Fascism was triumphantly anti-liberal. It also provided the proof that man can, without difficulty, combine crack-brained beliefs about the world with a confident mastery of contemporary high technology.... Nevertheless, the combination of conservative values, the techniques of mass democracy, and an innovative ideology of irrationalist savagery, essentially centered in nationalism, must be explained.... The strong commitment of the Left, from the liberal onwards, to anti-war movements, the huge popular revulsion against the mass killings of the First World War, led many to underestimate the emergence of a relatively small, but absolutely numerous, minority for whom uniform and discipline, sacrifice-of self and others- and blood arms and power were what made masculine life worth living. These Rambos of their time were natural recruits for the Radical Right." ...