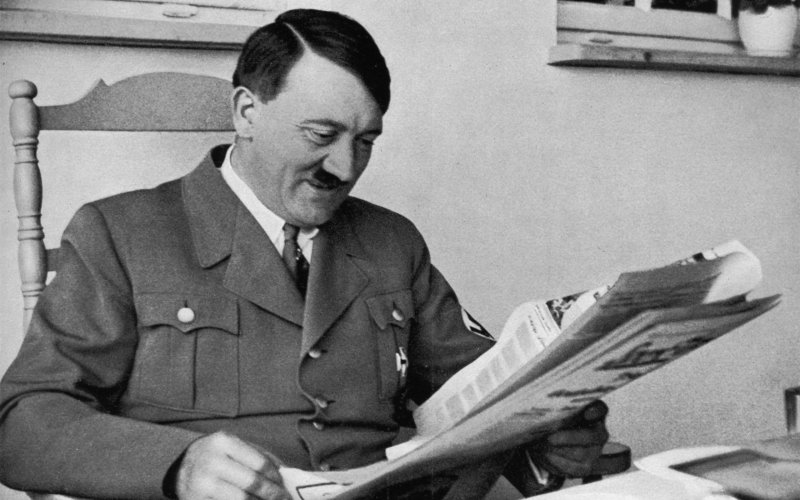 They fell hard for the job-creating Führer with eyes that were like ‘blue larkspur.’ Why did so many journalists spend years dismissing the evidence of his atrocities?

“The train arrived punctually,” a Christian Science Monitor report from Germany informed its readers, not long after Adolf Hitler’s rise to power in 1933. “Traffic was well regulated” in the new Germany, and policemen in “smart blue uniforms” kept order, the correspondent noted. “I have so far found quietness, order, and civility”; there was “not the slightest sign of anything unusual afoot.”

As for all those “harrowing stories” of Jews being mistreated—they seemed to apply “only to a small proportion”; most were “not in any way molested.” Overall, the Monitor’s dispatch declared, the Hitler regime was providing “a dark land a clear light of hope.”

Why did many mainstream American newspapers portray the Hitler regime positively, especially in its early months? How could they publish warm human-interest stories about a brutal dictator? Why did they excuse or rationalize Nazi anti-Semitism? These are questions that should haunt the conscience of U.S. journalism to this day.

Some of the U.S. press coverage of Hitler’s first weeks in power was rooted in unfamiliarity with the man and his movement. The Nazis had risen from barely 18 percent of the national vote in mid-1930 to become Germany’s largest party only two years later, and gained power just months after that. Knowing little about Hitler and Nazism, many American editors and reporters assumed, based on previous experience, that a radical candidate would show some restraint once in office.

An editorial in the Philadelphia Evening Bulletin on Jan. 30, 1933, asserted that “there have been indications of moderation” on Hitler’s part. The editors of The Cleveland Press, on Jan. 31, claimed the “appointment of Hitler as German chancellor may not be such a threat to world peace as it appears at first blush.” Frederick Birchall, Berlin bureau chief for The New York Times, found “a new moderation” in the political atmosphere following Hitler’s rise to power.

Events on the ground quickly overtook those optimistic predictions. Soon after Hitler assumed power, all Jews were dismissed from government jobs and ousted from a wide range of other professions, from dentistry to the movie industry. Sporadic anti-Jewish violence erupted throughout the country—and was amply reported in the American press. The Chicago Tribune described assaults in which Jews were “hit over the heads with blackjacks, dragged out of their homes in night clothes and… taken off to jail and put to work in a concentration camp.” The New York Evening Post reported that “an indeterminate number of Jews… have been killed. Hundreds of Jews have been beaten or tortured. Thousands of Jews have fled. Thousands of Jews have been, or will be deprived of their livelihood. All of Germany’s 600,000 Jews are in terror.”

Yet some American journalists presented a very different view of Germany. Birchall of the Times, in a March 12 radio broadcast from Berlin, reported that “German violence had been spent” and predicted that “prosperity and happiness” would soon prevail. A page-one dispatch from the New York Herald Tribune’s Berlin correspondent on March 25 asserted that while the situation of German Jewry was “an unhappy one,” many atrocity stories were ”exaggerated and often unfounded.”

“Just as Belgian atrocity stories then mentioned chopped-off children’s arms, so there is talk today of allegedly gouged eyes and cut-off ears,” the foreign minister asserted in an Associated Press dispatch. “One would really think that the foreign public, which meanwhile realized the untruth of the World War atrocity stories, would not so easily again be deceived by a new dishing-up of similar fairy tales.”

Some American editors and reporters perceived Nazi actions against Jews not so much as attacks on Jews per se, but rather as resentment over some aspects of the Jews’ own (alleged) behavior.

The New York Herald Tribune’s Berlin correspondent, John Elliott, claimed the Nazis were targeting Jews not because of their “race,” but because they were political opponents of the Hitler regime. According to Elliott, even Albert Einstein was “detested by the Nazis more for his pacifism than for his Jewish blood.”

The editors of The Columbus Dispatch believed the Nazis were reacting to the “large Jewish element in the financial, commercial, professional, and official life of present-day Germany.” A Christian Science Monitor editorial declared that it was the Jews’ own “commercial clannishness” which “gets them into trouble.”

A leading Protestant periodical, The Christian Century, proclaimed in an April 26 editorial: “May we ask if Hitler’s attitude may be somewhat governed by the fact that too many Jews, at least in Germany, are radical, too many are communists? May that have any bearing on the situation? There must be some reason other than race or creed—just what is that reason?”

Some prominent journalists seemed charmed by Hitler. Birchall of the Times, in his aforementioned radio broadcast, offered a somewhat sympathetic portrait of the Nazi leader as “a vegetarian [who] neither drinks nor smokes” and “has taken upon himself the hardest job that ever a man could undertake.”

His colleague Anne O’Hare McCormick, landing an exclusive interview with Hitler, provided the Nazi leader with a major public-relations boost in July 1933. Her page-one interview, headlined “Hitler Seeks Jobs for All Germans,” gave the Führer paragraph after paragraph to justify his domestic policies as the only way to deal with Germany’s unemployment, improve its roads, and promote national unity.

McCormick’s softball questions included “What character in history do you admire most, Caesar, Napoleon, or Frederick the Great?”

McCormick’s Hitler was a kinder, gentler Führer. Hitler is “a rather shy and simple man, younger than one expects, more robust, taller…. His eyes are almost the color of the blue larkspur in a vase behind him, curiously childlike and candid…. His voice is as quiet as his black tie and his double-breasted black suit…. Herr Hitler has the sensitive hand of the artist.”

Remarkably, even five years later—after five years of anti-Jewish violence, German militarization, and the annexation of Austria—some in the Western press still tried to present Hitler’s human side. In November 1938, the same month that the Kristallnacht pogrom devastated German Jewry, the British magazine Homes & Gardens ran a fawning three-page photo spread on Hitler’s “bright, airy chalet” in the Bavarian Alps. “The Führer has a passion about cut flowers in his home, as well as for music,” it reported. Sometimes “the Squire himself [Hitler] will stroll through the woods into hamlets” nearby, where he “gives a ‘Fun Fair’ to the local children.”

Not long before that puff piece, The New York Times published a dispatch from one of its Berlin correspondents in which he could barely conceal his admiration of Hitler’s “mountain retreat.” The home “is simple in its appointments and commands a magnificent highland panorama…. Herr Hitler in principle detests the big cities, where ‘the houses are thick and the sewers annoy the air.’ He craves moderate altitudes and highland breezes.”

There was another important factor that influenced U.S. press coverage of Hitler’s early years: the position taken by President Franklin D. Roosevelt and his administration.

Many editors and reporters took their cues from the White House, either because of their political sympathy for the administration, their deference to the president, or a sense that he knew better than they when it came to complex foreign-policy questions. If FDR regarded a particular issue as important, the news media usually took it seriously. If he ignored or downplayed a certain topic, they were less likely to pursue it.

“His eyes are almost the color of the blue larkspur in a vase behind him, curiously childlike and candid…. His voice is as quiet as his black tie and his double-breasted black suit…. Herr Hitler has the sensitive hand of the artist.”

The result, according to Laurel Leff, the leading expert on American coverage of the Holocaust, was a “feedback loop”: The Roosevelt administration, which carefully monitored 425 newspapers daily, downplayed the plight of the Jews, and then “used the lack of prominent news stories to confirm its judgment that the public was not interested and to justify its lack of response.”

In the 82 press conferences FDR held in 1933, the subject of the Nazi persecution of the Jews arose just once, and not at Roosevelt’s initiative. It would be five years, and an additional 348 presidential press conferences, before anything about Europe’s Jews would be mentioned again by the president.

During the 1930s, the position of the White House was not just to sidestep the plight of the Jews, but also to combat any domestic criticism or protests that might interfere with U.S.-German diplomatic and economic relations.

The administration intervened to block congressional resolutions in 1933-34 criticizing Nazi Germany. It also tried to dissuade Jewish groups from staging a mock trial of Hitler. Secretary of State Cordell Hull shared with U.S. diplomats in Germany his “fear that the continued dissemination of exaggerated reports may prejudice the friendly feelings between the peoples of the two countries and be of doubtful service to anyone.”

Hull apologized to the Nazi regime when a New York City judge acquitted protesters who tore a swastika flag off a German ship in New York Harbor in 1935. He apologized again in 1937 when Mayor Fiorello La Guardia called Hitler a “fanatic who is threatening the peace of the world.” Roosevelt even compelled Interior Secretary Harold Ickes to remove critical references to Hitler, Mussolini, and Nazism from a 1938 speech.

When U.S. Jewish groups organized a boycott of German products, Hull asserted it would be damaging to American interests. The administration even quietly permitted goods to be labeled as having been made in a particular city or province rather than requiring that they be stamped “Made in Germany.” It took the threat of a lawsuit by Jewish leaders to put an end to that. The labeling episode was a tailor-made opportunity for investigative journalism—if the mainstream news media had any interest in exposing the administration’s duplicity. Which it didn’t.

Perhaps it is not surprising that the sudden, unexpected rise of an extremist from beer halls to the halls of power would catch the Fifth Estate off-guard. What is troubling, however, is the extent to which some mainstream American newspaper editors and reporters deviated from accepted journalistic standards and allowed their better judgment to be clouded by wishful thinking, admiration for punctual trains, susceptibility to celebrity, or deference to the president. One wonders how their successors would  respond if a comparable situation were to arise in our own time.