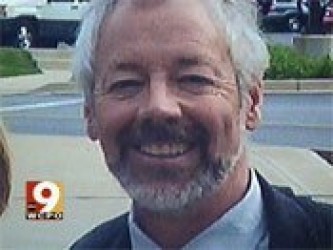 Phil Bates of Cincinnati was the latest in a series of bio-tech scientist to be murdered in cold blood, on August 26 - the night before the crash of Comair Flight 5191 in Lexington, a disaster that left 49 passengers dead.

A magical symbol was left at the scene of the murder.

Summary of the evidence collated here: Patheon, a Canadian drug company and partner of Aventis, is in desperate financial straits and faces ruin because its operations in Puerto Rico have produced an inventory of unstable drugs. What to do? The drug companies intend to market the tainted drugs, anyways. Bates, a quality control chemist for Patheon, was murdered a month after the decision to release the contaminated product was made by officers of Patheon. Did Phil Bates, a quality control engineer, pose a threat to the company's plan to sell tainted pharmaceuticals? The police have no theories, have established no motive - my own investigation of the corrupt corporate background of Bates' life suggests that it may be business related.

A Cincinnati school board member's husband is dead after being found shot on his front porch Saturday night.

A neighbor told 9News they heard one shot fired, then heard a woman scream around 1 a.m. That neighbor called 911.

Once police arrived to the Rose Hill Avenue home, they found Phillip Bates suffering from a single gunshot wound - he later died at the hospital.

Phillip Bates, 55, was the husband of Melanie Bates.

Melanie and her daughter rode downtown with police after the shooting. There is no word from the family.

There is no word about who shot Phillip Bates or how the shooting happened.

The following is the full text from a Cincinnati Police press release:

On August 27, 2006, at 1241 a.m., District Four police officers responded to a reported shooting in the area of Clinton Springs and Rose Hill Lane. Upon arrival, police officers discovered an unconscious white male mortally wounded from a gunshot lying on the front porch of 3937 Rose Hill Avenue.

["Kokopelli is a fertility deity, usually depicted as a humpbacked flute player (often with a huge phallus and antenna-like protrusions on his head), who has been venerated by many Native American cultures in the Southwestern United States. Like most fertility deities, Kokopelli presides over both childbirth and agriculture. He is also a trickster god." - Wikipedia]

Police hope new evidence will give them a break in the Phillip Bates murder case.

Cincinnati police are hoping that someone will recognize a key chain medallion or pendant left at the scene of the murder.

Police say it is in the shape of a "kokopelli" and that it may have been on a key chain.

Husband Of School Board Member Shot To Death

The senselessness of the shooting is what is astounding to his friends because they say there would be no point in harming Phil Bates.

Bates was a chemist for many years and worked in quality assurance at PATHEON Corporation here in Cincinnati.
----------------------
Khashoggi Connection: On the Patheon Board of directors

Patheon buys Aventis site in US

The agreement means Patheon provides employment to all 530 employees while continuing to manufacture and supply all Aventis products currently produced at the site.

Bob Tedford, CEO of Patheon Inc. sees the US as an important market for Patheon. "The Cincinnati site will bring a conveniently located operating presence to serve that market." ...

The facility is located on a life sciences campus, which incorporates the University of Cincinnati Genomics Research Institute and a development scale manufacturer of active pharmaceutical ingredients

Projected revenues in the first 12 months of operation will be in the range of US $95 million. About 28% of this will be from manufacturing and supply agreements with Aventis that have an initial term of five years with renewal provisions.

CINCINNATI (October 16, 2002) - Governor Bob Taft today commended Patheon, Inc. of Canada on its plan to invest $62 million to acquire and expand Aventis Pharmeceuticals' operation in Reading (Hamilton County).
-----------------------
[Patheon's Financial Woes are Directly Due to PHARMACEUTICAL QUALITY CONTROL Problems. Philip Bates was a quality control chemist... was his murder related to a contaminated or unstable pharmaceutical product the company, or its partner Aventis, is putting on the market. Read all about it ...]

25/09/2006 - Patheon’s move to Puerto Rico is shaping up to be the worst decision the contract manufacturer has ever made, resulting in massive losses in the third quarter of 2006 and leading management to entertain the possibility of a sell-out.

As a result the Canadian company has appointed a special committee to “evaluate strategic and financial alternatives” while putting on hold its search for a new CEO, a tell sign that the sale of the firm is one of the options considered.

The most serious problem in the third quarter in Puerto Rico occurred at the Caguas facility, where it was discovered that some batches of an undisclosed product might not achieve their expected shelf life.

Patheon decided to temporarily stop production, and after considering data accumulated from stability studies conducted throughout the month of August, the company took corrective actions and in early September it allowed the release of shipments of finished product representing approximately 90 per cent of the total production volumes.

Meanwhile, an inactive ingredient for a different product made at the Carolina facility was temporarily unavailable, though this did not disrupt the client's inventory and the situation has now been remedied.

Additionally, there has been a year-over-year decline in volumes of a generic product manufactured in Puerto Rico as one of Patheon's clients lost a major account earlier this year, while volumes of Merck's blockbuster cholesterol drug Zocor (simvastatin) have also dropped due to its patent expiration last summer.

All these issues, in conjunction with the cost of corrective action the company had to take to address production issues with Abbott's antibiotic Omnicef (cefdinir), were responsible for earnings before interest, tax, depreciation and amortisation (EBITDA) in Puerto Rico of $3.5m in losses in the third quarter, compared with a positive EBITDA of $4.8m in the same period last year.

Even if it wasn't for Puerto Rico and the $254.7m impairment charge that wiped off Patheon's earnings, the company would have still shown a net loss of $13.6m from a $13.2m net profit a year ago.

This is because the efficiencies and cost savings in Patheon's global manufacturing operations promised last quarter with the launch of a vague “Performance Enhancement Programme” have not yet materialised; as a percentage of revenues, the EBITDA margin was 8.5 per cent in Q3 2006, compared with 14.5 per cent in the same period a year ago.

In Canada for example, gains from higher capacity utilisation, particularly at the Whitby and Toronto York Mills facilities, were small and offset by the impact of the strengthening of the Canadian dollar, so EBIDTA there dropped $0.2m to $6.6m.

Across the pond in Europe, gains in sterile product volumes at the two manufacturing sites in Italy were offset by declines in mature product volumes at Swindon, UK and Bourgoin-Jallieu, France, resulting in an EBITDA of $8.3m, a $1m year-on-year decrease.

“A lot of work has been done by the company over the past three months, we have come up with a restructuring initiative in consultation with an outside firm that has solved many problems, like eliminating backorders at Whitby, and we will launch the same programme in Puerto Rico,” he said.

“A more detailed plan with more comprehensive initiatives will be shown to the committee to consider within the context of the whole strategic review we are undertaking.”

Even if Patheon is not put up for sale, the company's 5,900 employees who work at 14 facilities in North America and Europe fear that reforms may cut many jobs.

In PDS, Patheon's EBITDA was $5.9m, up $1.6m year-on-year, mainly thanks to the Swindon unit where additional laboratory space was brought on line in Q3.

Moreover, the transfer of products into Italy and France from two carve-out initiatives has reached its final stages, while there has also been progress in the construction of a new facility in Swindon dedicated to lyophilized cephalosporins, as the equipment and the operating systems have been fully commissioned, validation batches are expected to be completed in October and the site is on track for commercial production in August 2007.

Looking ahead, Patheon did not issue specific guidance but said that revenues in the fourth quarter of 2006 are expected to be slightly lower than the third quarter.

In Canada, there will be a reduction in volumes at the Whitby facility as the backorder position has been resolved, while in Europe, results will be impacted by normal summer shut downs, the company suggested.

The future in Puerto Rico looks brighter, since shipments have resumed of the product manufactured in Caguas for which stability-related issues had been previously identified and volumes are also expected to increase in Carolina as clients build inventory levels in preparation for the cough and cold season.
----------------------
http://www.wkrc.com/crimestoppers/
story.aspx?content_id=63C0BFF5-547C-
4D94-B024-BD1A4D03D863

Video
Police investigating the murder of Philip Bates three weeks ago now say several people saw his killer and even talked to him before the murder. Some residents in the area were suspicious of the man who hung around near a condo complex near the Bates' home. But as Local 12's Deborah Dixon tells us, no one talked to police until it was too late.   Detectives believe Phil Bates' killer hung around the Belvedere Apartments for hours before Philip was killed at his home a street away. A witness at the bus stop said the fidgety African American man who talked to him looked up as Philip Bates pulled into his driveway after midnight on August 27th.   Sgt Gary Conner, Cincinnati Homicide Detective: "According to witness, as Mr Bates went up the street, once he started turning into driveway, subject ran toward that direction."   Moments later, a gunshot and the same man ran back from Rose Hill and crossed over Clinton Springs. After that, several people say they noticed him.   "Some of them thought he was going to commit a crime, but nobody, nobody called police."   "If some people tapped into their instincts, Philip Bates could be alive. Strong possibility."   A painful reality for the Bates family.   Melanie Bates, Murder Victim's Widow:  "You don't have to call 911, let somebody know, let police know this is not normal, doesn't fit in, something feels wrong."   Police think there are more people who saw the man, witnesses they haven't talked to. He's around five-nine, 18-26 years old. That night he wore a white tank top and t-shirt, shorts, and a white hat or wrap.   "If they come forward, we can take evidence, we possibly connect the dots."   Connecting the dots is a way for the Bates family to get back to life, even if it will never be the same.   "We don't know what happened to Phil. With illness, equally tragic, they know what happened, why, how, and who, we don't how can we move on without knowing."   Deborah Dixon Local 12.   The reward for information in this case is now up to five thousand dollars. Police still link an Indian symbol keychain to the murder, because it was found in the driveway where the gunman confronted Bates.   Callers to CrimeStoppers at 352-3040 are identified by code numbers not names.