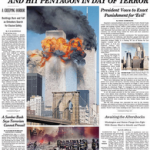 NEW YORK, Sept. 24 /PRNewswire-USNewswire/ -- On Sunday, September 27 at 2 p.m., The New York City Coalition for Accountability Now (NYC CAN), a group comprising 9/11 family members, first responders and survivors, will march from Battery Park to City Hall in protest of the City's attempt to block the referendum for a fresh probe of the 9/11 attacks from going on the November ballot.

The effort to establish a local commission to pick up where the 9/11 Commission left off comes just as the 9/11 Commission's Chief Counsel John Farmer released a book entitled "The Ground Truth" in which he claims "at some level of government, at some point in time. . . there was an agreement not to tell the truth about what happened."

Eighty-thousand New Yorkers have signed the petition as it has won the endorsement of 2002 TIME magazine person of the year, and former FBI agent, Coleen Rowley, as well as outspoken 9/11 victims' family members including Bill Doyle, who lost his son Joey, and Lorie Van Auken, who lost her husband Kenneth. Van Auken is one of the esteemed 'Jersey Girls' who successfully lobbied the federal government to set up the 9/11 Commission only to have 70% of her group's questions to the Commission go unanswered.

Speakers for the Battery Park rally include 9/11 family members Bob McIlvaine and Manny Badillo, New York University's Professor of Media Studies, Mark Crispin Miller, and actor Daniel Sunjata of the Emmy-winning Fox Television series "Rescue Me" which depicts post-9/11 life in a FDNY firehouse. After a half-hour speakers' program, 9/11 family members and first responders will lead thousands of supporters in a march past Ground Zero, The City Clerk's Office and The State Supreme Court, all the way to the steps of City Hall.

This week NYC CAN submitted a memorandum of law in response to the City's challenge of the petition's legality. The Court-appointed referee is scheduled to submit his report and recommendations to the Court on Monday, September 28. The Court will decide whether or not to adopt the referee's recommendations and then issue a decision, after which appeals will likely follow immediately. "The arguments are strong on both sides, so the judges will have some thinking and analyzing to do," said Dennis McMahon, the Petitioners' attorney. "No other case pending in the New York courts has a higher priority on the calendars than this one, so we should have a definitive answer by next week."

If the Court decides in NYC CAN's favor and 15,000 of the 28,000 additional signatures submitted on September 4 are deemed valid by the City Clerk, the referendum will go on this November's ballot. If the referendum passes, it would lead to the creation of a local, independent commission with subpoena power that would be tasked with comprehensively reinvestigating the attacks. For more info: http://www.nyccan.org.